The nation’s largest farm group is calling on the White House to clarify President Joe Biden’s goal of conserving 30% of U.S. land by 2030.

“The concerns of farmers and ranchers are escalating regarding the intent of the 30x30 goal, the definition of conservation, and the metrics for defining success, among other things,” the American Farm Bureau Federation says in a letter to the White House.

Ag Secretary Tom Vilsack defended the 30x30 goal on Thursday, telling reporters it was primarily aimed at public lands and “private working lands” and is not a “land grab.”

At the same time: Vilsack expressed optimism that USDA can coax landowners into taking 4 million acres out of production through the Conservation Reserve Program despite soaring commodity prices.

Vilsack said he didn’t think expanding CRP would have a significant impact on global markets. The National Grain and Feed Association, which represents grain traders and processors, is warning that “drastically” increasing CRP could result in negative climate impacts.

But Vilsack said his planned increase in CRP “is not going to create additional pressure for deforestation.”

Take note: CRP is already 4 million acres under its current cap, and contracts for 3 million acres are scheduled to expire in September.

Among the enhancements to CRP that Vilsack is making is a 10% one-time “inflationary” increase in payment rates.

Read more about Vilsack and the 30x30 goal here. 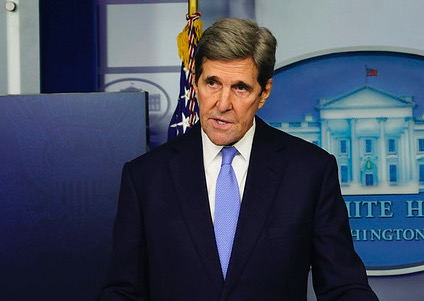 One of the biggest questions facing Biden at this week’s climate summit is whether foreign leaders will take seriously the new U.S. climate pledge.

“That is the way the markets are moving. No politician, no matter how demagogic, or how potent and capable they are, is going to be able to change what that market is doing,” Kerry said.

Kerry thinks the U.S. will likely exceed Biden’s pledge to cut U.S. emissions in half by 2030.

Keep in mind: China’s emissions account for 30% of global emissions – twice the U.S. share – and President Xi Jinping said Thursday that they won’t peak until 2030. Xi claimed China will still be carbon neutral by 2060.

The European Union is moving ahead with its plan to impose a carbon adjustment tax on imports, but it first wants an agreement at the World Trade Organization on how to set carbon pricing.

“We must set the right incentives at the global level because carbon leakage across our economies is detrimental,” European Council President Charles Michel said in a speech at the climate summit Thursday.

“That’s why we intend to introduce a carbon border adjustment mechanism. This is needed to ensure a level playing field. And it must be compatible with WTO rules. We are ready to work with all our partners on carbon pricing.”

White House officials suggested to reporters Wednesday that Biden may be open to a carbon adjustment tax, which could protect U.S. manufacturers and farmers who invest in reducing greenhouse gas emissions.

The Growing Climate Solutions Act, which is intended to accelerate ag carbon markets, is headed to the Senate floor with 42 co-sponsors, evenly divided between Democrats and Republicans. The Senate Ag Committee approved the bill by voice vote Thursday.

The House version has been introduced by Rep. Abigail Spanberger, D-Va., and Don Bacon, R-Neb., with 22 cosponsors, including nine Republicans.

Report our report on the committee action here.

The Senate GOP is making a $568 billion counterproposal to fix the nation’s infrastructure – a fraction of the White House’s $2.7 trillion American Jobs Plan.

The top Republican on the Environment and Public Works Committee, Shelley Moore-Capito of West Virginia, says the GOP offer is a “serious plan” and “robust package.”

The details: The GOP package has $299 billion for roads and bridges, $17 billion for ports and inland waterways, $65 billion for broadband, and $14 billion for water storage. Biden’s transportation proposal alone is $621 billion.

The top Republican on the Senate Commerce Committee, Roger Wicker of Mississippi, says adding the $65 billion in broadband spending to $40 billion already passed by Congress gets close to the $100 billion Biden proposed for broadband.

USDA’s Foreign Agricultural Service office in Beijing predicted this week that China’s corn imports would hit a record-breaking 28 million metric tons for the 2020-2021 marketing year as the country refills its domestic reserves and contends with rising demand for livestock feed.

Net sales and exports of pork to China were also strong.

Florida blocks use of aldicarb for citrus greening

The federal government’s failure to consider the impacts of aldicarb on endangered species has resulted in Florida declining to allow its use to combat citrus greening.

The Florida Department of Agriculture and Consumer Services notes that the EPA conceded in court that it did not meet the Endangered Species Act’s consultation requirements for the insecticide. EPA has asked the D.C. Circuit Court of Appeals to remand the decision to the agency without vacating the conditional registration, which was issued Jan. 12.

State Ag Commissioner Nikki Fried said “aldicarb poses an unacceptable risk to human, animal, and environmental health in Florida, is one of the world’s most toxic pesticides, and is banned in more than 100 countries.”

She said it. “As the U.S. takes steps to address the growing climate crisis, meet our international climate goals, improve public health outcomes, and grow the clean energy economy, biofuels are an essential part of the solution.” – Emily Skor, CEO of Growth Energy, responding to Biden’s climate pledge.