It looks like the Conservation Reserve Program is going to take a cut in acreage this fall because of soaring commodity prices. During a call with reporters from Mexico on Tuesday, Ag Secretary Tom Vilsack provided some fresh numbers on the general signup that ended last month.

He says that only 1.8 million of the 4 million acres in expiring contracts will be re-enrolled in the program, and that there will only be about 800,000 acres in new contracts. That would be a net loss of about 1.4 million general-signup acres.

“We got a few new contracts but nowhere near the number of contracts that did not re-up,” Vilsack said.

Vilsack said the numbers prove there was no reason for him to open CRP to emergency cropping. “The market basically responds to signals and farmers make the decision,” he said.

Keep in mind: These enrollment numbers are a blow to the administration’s effort to use CRP as a tool to reduce greenhouse gas emissions. About 22 million acres are currently enrolled in CRP, well below the current cap of 25.5 million acres. The limit rises to 27 million acres in October.

Vilsack doesn’t have a breakthrough to show for it. But he says he used a meeting with Mexico’s president, Andrés Manuel López Obrador, on Tuesday to make a case for approving biotech crop traits.

Vilsack said the meeting was originally scheduled for an hour but expanded to two hours. The “wide ranging discussion” included agricultural labor constraints and the impact of the war in Ukraine, Vilsack said.

In a “very frank discussion” about the biotech issue, Vilsack said he pressed the importance of biotechnology to agricultural productivity.

The Capitol grounds were astir Tuesday with several reports from Capitol Police of people being bitten by a fox. In an alert to Hill staff, the police said there were “possibly several fox dens on Capitol Grounds.”

Politico ag reporter Ximena Bustillo posted on Twitter that she was bitten from behind by a fox while she was walking on the Capitol grounds. “I didn’t even see it. I’m from Idaho. I know to not try and pet it!!”

Shortly after she posted her experience, the Capitol Police reported capturing the fox that is shown above. 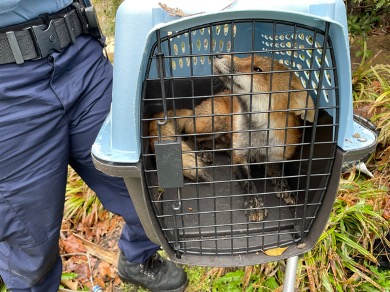 The Environmental Protection Agency wants to strengthen partnerships with USDA, states, tribes and community groups to reduce the flow of excess nutrients into the nation’s waters.

In a policy memo issued Tuesday, EPA Assistant Administrator for Water Radhika Fox said EPA is “urging” states to include numeric criteria in their water quality standards. Despite EPA’s continued advocacy for the adoption of numeric criteria since 1998, “many states have not yet done so,” Fox said.

The memo says EPA plans to “expand engagements with agricultural stakeholders and highlight their successes.” One avenue will be new quarterly roundtables with ag groups and continuation of existing forums, including the Office of Wastewater Management’s Animal Agriculture Discussion Group.

The Labor Department is hosting a three-day virtual seminar called “Nourishing Equity and Cultivating Compliance” that continues through Thursday.

Labor Secretary Marty Walsh told 1,500 attendees on Tuesday that “too many workers are still vulnerable to exploitation and wage theft.” He said the Wage and Hour Division conducted more than1,000 investigations and recovered over $8 million in back wages for more than 10,000 ag workers in fiscal 2021.

“We are here to provide education and information and to enforce the law. And when compliance improves, everyone benefits,” he said.

Environmental groups, fishing businesses and small farmers are among those calling on the Biden administration to revoke a Trump-era executive order promoting aquaculture.

The May 2020 order “pushes agencies to streamline and expedite permitting processes” for the fish farming operations, with little public and congressional oversight, they say in a letter to Biden and relevant federal officials, including Commerce Secretary Gina Raimondo and Ag Secretary Tom Vilsack.

“Industrial offshore fish farms would contaminate our marine waters with drugs, chemicals, and untreated wastes, while creating a breeding ground for pests and diseases,” says the letter dated today.

By the way: The executive order called for an update to the 1983 National Aquaculture Development Plan. The Subcommittee on Aquaculture, which operates under the auspices of the White House Office of Science and Technology Policy, recently sought comments on that update.

The top Republican on the House Ag Committee says smaller dairy farms should be able to take part in centralized anaerobic digesters, devices used to turn manure into renewable energy.

In an exchange with Jay McKenna, the CEO of clean gasoline company Nacero, Rep. Glenn “GT” Thompson said digesters work well for large farms. But McKenna, whose company uses biogas to produce motor fuel, warned the cost of the technology may be out of reach for smaller farmers.

Thompson says digesters could be provided by a company or cooperative for numerous farms to use. Thompson said one facility could serve 30 or 40 farms in his Pennsylvania district.

He said it. “Whoever thought we'd see a revenue stream off the manure, which is great for American farmers, but it's great for energy production as well," Thompson said.