The Environmental Protection Agency is proposing to allow canola oil to be used as a feedstock for renewable diesel and sustainable aviation fuel, potentially providing a new alternative to soybeans at a time when vegetable oil prices are skyrocketing worldwide.

The proposal highlighted by the White House as part of its recent efforts to expand the use of biofuels says renewable diesel made from canola would have 63% to 69% lower greenhouse gas emissions than conventional diesel. Biofuels must reduce emissions by at least 50% to qualify as advanced biofuels under the Renewable Fuel Standard.

The agency still has to finish gathering public comments on the plan before it is finalized.

For canola growers, it can’t happen soon enough, although the impact on U.S. canola acreage is expected to be modest for the near term.

“We're excited that EPA determined that canola could be used as an advanced fuel under that RFS standard or program,” said U.S. Canola Association Board President Andrew Moore, who farms near Resaca, Georgia. “We know that it has potential to open up some different pathways for different producers to be able to utilize different markets.”

In 2010, EPA approved a pathway for canola oil as a feedstock for biodiesel, but not for renewable diesel or any other advanced biofuels. The U.S. Canola Association sent the EPA a petition in 2020 requesting the agency re-evaluate the GHG emissions associated with renewable diesel, jet fuel, naphtha, LPG and heating oil produced from canola oil.

Canola oil is made by crushing seeds from canola plants, which grow well in Canada and predominantly in northern U.S. states like North Dakota, Montana, Washington and Minnesota. According to the EPA, U.S. canola acreage grew from 1.43 million acres in 2010 to 1.80 million acres in 2020. The most recent Prospective Plantings report from the Department of Agriculture went even further, noting an anticipated 2.1 million acres of canola will be planted in 2022.

In the proposed rule, EPA estimated that approval of the pathway would cause an additional 17,600 additional acres of land to be planted with canola. Over 16,000 acres of this would likely come from North Dakota, which planted 1.7 million acres of the crop last year.

Canola would probably also see some growth in Montana, where around 185,000 acres of the crop were planted in 2021. The Montana Farmers Union has been a major advocate for getting canola oil approved as a feedstock.

“In Montana, we can grow canola pretty much in most of our dry land areas and we can't grow soybeans everywhere,” said MFU President Walter Schweitzer. “So this will open up an opportunity for Montana farmers.”

Renewable diesel is chemically identical to petroleum and can directly fuel diesel engines without needing to be distilled or mixed. According to the U.S. Energy Information Administration, the U.S. is expected to see its capacity to produce the fuel surge from 600 million gallons in 2020 to 5.1 billion gallons by 2024.

“I think in my lifetime, I'm going to see a crush plant in all the major cities in Montana to meet the demand of our own refineries, not to mention all the refineries spread out across the United States,” Schweitzer said.

Biodiesel needs to be blended with petroleum-based diesel to be used in engines. According to the U.S. Canola Association’s 2020 petition, canola oil is the feedstock for around 6% to 7% of the biodiesel produced in the U.S. 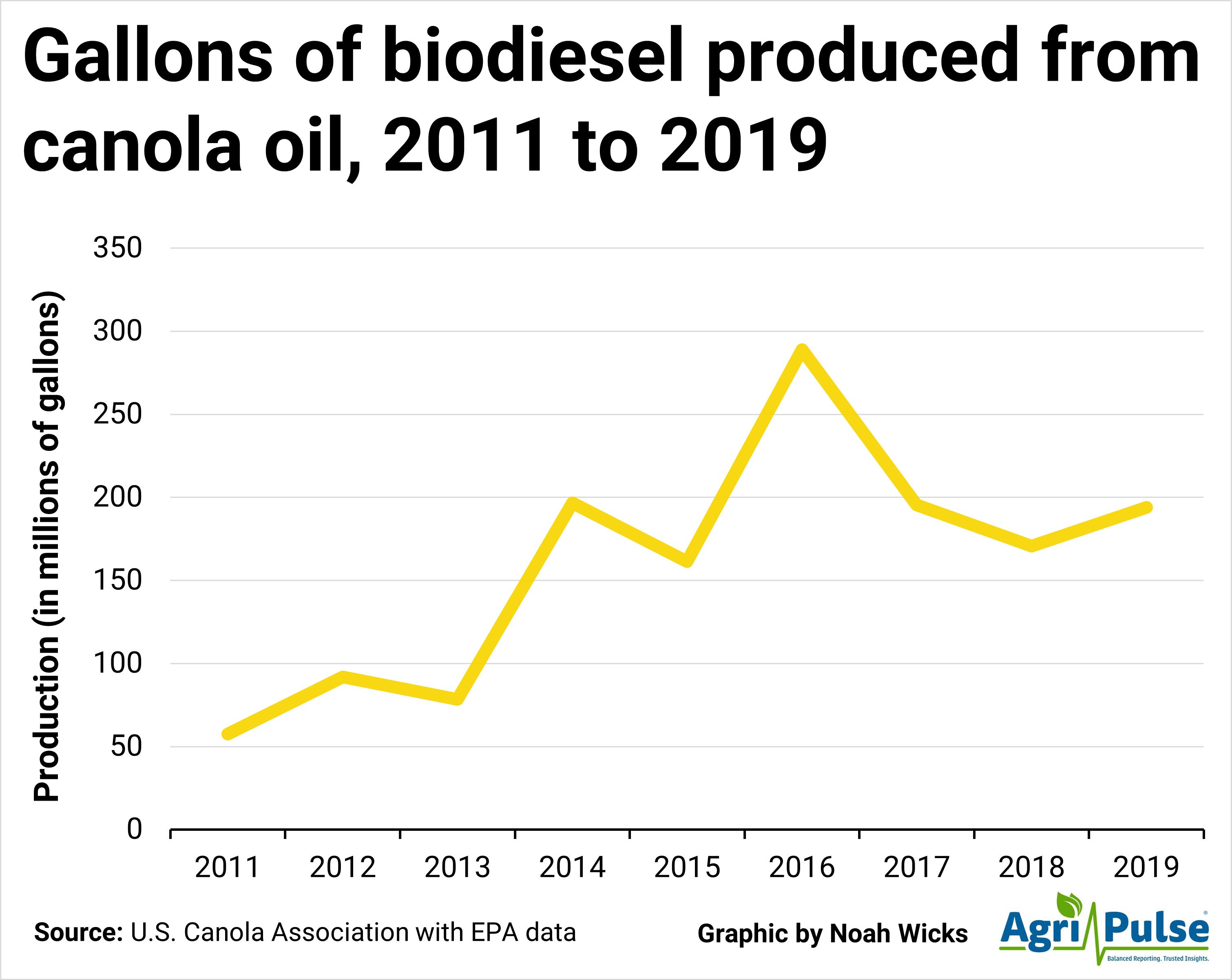 “We're not talking about significant volumes,” said Tom Hance, the Washington representative for the U.S. Canola Association. “It’s a premium food oil and that’s going to continue to be its primary market in the U.S.”

J. Alan Weber, an economist at MARC-IV who also works with Clean Fuels Alliance America, doesn’t foresee a substantial increase in canola acreage in response to the ruling in the near term. He said it will likely take at least a year from enactment to see any growth, since EPA still needs time to review comments and many biofuel producers have already contracted with feedstock suppliers.

“My anticipation is [we'll have] to look at 2023 and beyond in terms of additional usage," he said. "Even if we have the approval in 2022, with the way that the market contracts work and the approval process, we probably won't have a huge bump [right away].”