Soaring prices for grains and other food commodities are starting to slow down global economic growth, fueling fresh calls for aid to poor countries and warnings about the impact that new trade restrictions could have on the crisis.

The International Monetary Fund on Tuesday lowered its forecast for global economic growth this year to 3.6%, a reduction from IMF’s January estimate of 4.4% and down from 6.1% growth in 2021.

IMF warned that Russia’s invasion of Ukraine is likely to “have a protracted impact” on global commodity prices, driving up food costs well into 2023. Globally, food prices are expected to rise 14% this year, IMF said.

Overall inflation is projected at 5.7% in advanced economies this year and 8.7% in poorer countries.

“Inflation has turned into a clear and present danger and therefore action has to be taken,” IMF Managing Director Kristalina Georgieva said Tuesday.

David Malpass, president of the World Bank, said the “tragedy unfolding in Ukraine must not be compounded by another tragedy of a global food crisis. To prevent it requires speed, supply enhancement, market access and close coordination.”

The UN Food and Agriculture Organization said last week that global food prices rose nearly 13% in March to the highest level recorded since the start of its monthly price index in 1990, breaking a record set in February. Grain prices increased more than 17% in March, FAO said.

The food crisis is a key issue this week during meetings in Washington of G-20 leaders.

Treasury Secretary Janet Yellen said the war on Ukraine, a major global supplier of grain and oilseeds, “has made an already dire situation worse" and called for coordinated actions by countries and international financial institutions to offset the impact of food price spikes.

“We know that we must avoid export restrictions that can further increase prices. We must quickly support the most vulnerable populations with social safety nets and targeted support for smallholder farmers so they can continue to produce,” she said, speaking on an online event sponsored by the Treasury Department.

“And we must not lose sight of the need to strengthen longer-term resilience, because this latest shock will unfortunately not be the last.”

Gilbert Houngbo, president of the International Fund for Agricultural Development, said spikes in fuel prices were hurting many smaller farmers while skyrocketing commodity prices were hammering people in cities:

“If you are a baker in Ghana, which imports 30% of its wheat from Russia, how will you keep working when you face ... a disruption in the supply chain of wheat, or you cannot even access the wheat flour to make your bread, or the price is so high there is no client?”

To deal with wheat shortages, flour supplies in some areas could be supplemented with grains, such as millet, that can be sourced locally, he said.

Malpass said the World Bank would contribute $50 billion in the current quarter toward addressing the food crisis and $170 billion through June 2023.

In the developing world, “a typical family of a poor family spends as much as two-thirds of their income on food, and our estimates show that for each 1% increase in food prices, 10 million people may be thrown into extreme poverty,” Malpass said. 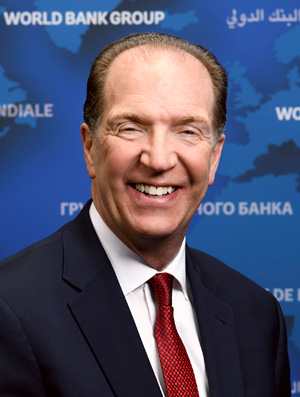 In a recent blog post, Malpass noted that the G-7 countries recently pledged not to impose food export bans. He said “other major food exporters — among them, Australia, Argentina and Brazil — should join in that commitment.” The G-7 is made up of Canada, France, Germany, Italy, Japan, the United Kingdom and the United States.

In its latest forecast, the IMF also said that central banks like the Federal Reserve faced a delicate task of controlling inflation in their own countries by raising interest rates that could in turn harm some financially stressed countries coming out of the COVID-19 pandemic:

"Following a huge and necessary fiscal expansion in many countries during the pandemic, debt levels are at all-time highs and governments are more exposed than ever to higher interest rates. The need for consolidation should not prevent governments from prioritizing spending with well-targeted support for the vulnerable — including refugees, those struggling because of commodity price spikes, and those affected by the pandemic."