As Newsom pitches $22B climate budget, a long-stalled conservation program gets attention

Yet agricultural counties and farm groups are drawing more attention to the Williamson Act, a program created more than 50 years ago to conserve farmland but stalled during the Great Recession and was never funded again.

“We need to make sure that any programs and partnerships we have going forward are things the state is really willing to commit to—and not just leave to the counties,” said Staci Heaton, a policy advocate with the Rural County Representatives of California (RCRC), who spoke at a recent hearing on the administration’s plan for conserving 30% of the state’s land and coastal waters by 2030, a commitment known as 30x30. “While [those programs] have been well-intentioned by the state, they have been abandoned by the state and left to the counties to hold the bag.”

To address that issue, RCRC is supporting Assembly Bill 1772, which would revive the Williamson Act program with $40 million from the state’s general taxpayer fund. The Assembly Agriculture Committee earlier this month passed the measure with unanimous support and no opposition. The Assembly Local Government Committee will take up the measure Wednesday. 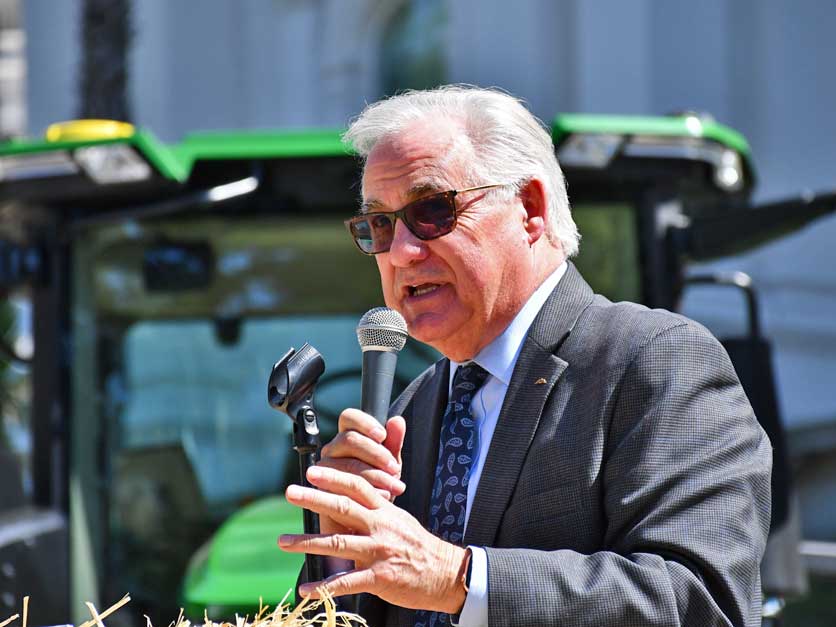 California passed the Williamson Act into law in 1965 to preserve open space and agricultural lands from development and “keep farmers farming,” according to California Farm Bureau policy advocate Taylor Roschen. Private property owners would sign voluntary contracts with counties—and occasionally cities—to preserve the land for 10 years. The contracts renew each year for another 10-year obligation. Under the “super Williamson Act,” the easements can extend to 20 years. In return, county assessors lower the value of the land to the standard of agricultural or open space lands, rather than raise it to market value as required under 1978’s Proposition 13.

The program has preserved more than 16.5 million acres of natural and working lands, accounting for nearly a third of the privately owned land in California.

The state, in turn, made subvention payments to the counties to make up for the lost property tax revenues. The Legislature had been funding the program with an annual appropriation of about $35-40 million. Amid sweeping budget cuts across the state government, however, the program lost all funding in 2010, drying up a significant revenue source for rural counties.

“These taxes weren't just used for agriculture. They were used for the entire community,” said Catherine Freeman, a legislative representative for California State Association of Counties, during the Assembly hearing. “The forgone property taxes could have been used for public safety, schools and other things.”

The bill’s author, Assemblymember Jim Patterson of Fresno, explained that without program funding, many local governments have not been accepting new contracts for easements and are not renewing existing contracts.

“This means lands that could otherwise be conserved are at risk for development,” said Patterson.

Roschen pointed out that just before the committee hearing, Imperial County’s board of supervisors denied a motion to open up acreage for Williamson Act contracts “because they simply can't afford it without the subvention payments.”

She acknowledged the challenge in articulating the benefits of a 20th century program within a 21st century context, but argued it “hits all the markers that are priorities for this administration,” as well as lawmakers and the public. She ran through a long list of benefits: It allows farmers to protect biodiversity through habitat restoration, ensure public access to nature, mitigate climate emissions while adapting to climate extremes, invest in dust management practices to improve air quality, and build facilities to generate renewable energy.

During the 30x30 hearing, Roschen urged the administration to consider Williamson Act contracts as durable obligations that go through a rigorous review process before approval and support the same biodiversity goals as the 30x30 plan.

In registering their support, CSAC and RCRC described the Williamson Act as more critical today than ever, “in a time where increasing land prices can offer a tempting reason for owners to parcel and subdivide crucial farmland and open space.”

Yet those arguments were never made to the Legislature when Patterson first introduced the measure in 2020. At the height of the pandemic, the Legislature shut down for several weeks and returned with a severely condensed calendar and great uncertainty over the state’s budget health. The Agriculture Committee never took up the measure and it fell to the wayside with hundreds of other bills.

The proponents are now eyeing the series of record budget windfalls under the Newsom administration and see the tax relief from the Williamson Act as one way to stimulate local economies in the wake of the pandemic while enticing landowners to conserve and to support California agriculture.

“More than ever, open space is needed for multiple benefits,” said Freeman, adding that it would help with water retention and quality, preserve critical rangeland, and strengthen the nation’s food supply.