Spanberger “has $3.8 million on hand, which will give her a good head start over the GOP nominee. But after winning by just two points in 2020, she has virtually no margin for error,” Wasserman says.

Keep in mind: Republicans have to win a net of five additional seats to take control of the House, and they are widely expected to do much better than that.

Agriculture Secretary Tom Vilsack is assuring farm leaders that progress is being made on naming the next USDA undersecretary for trade.

Sources tell Agri-Pulse that Vilsack said in meetings Tuesday at USDA headquarters that the person now going through the nomination process for the post isn’t having problems that previous candidates had. Two earlier contenders were unwilling to divest what they needed to in order to meet strict ethics guidelines.

A major environmental group with ties to the Biden administration is calling for changes in federal farm programs to promote the use of “regenerative” agriculture practices such as cover crops.

In a 61-page report being released today, the Natural Resources Defense Council outlined a long list of proposals, including changes to the federal crop insurance program. NRDC says, for example, that farmers should get a higher premium subsidy or lower premium rate for practices that improve soil health. The quickest way to do that would be to expand and extend the $5-an-acre cover crop subsidies that the Biden administration initiated last year and continued in 2022, NRDC says.

The report also says farmers should no longer be allowed to exclude some bad years from their yield histories, a move that would reduce those growers’ coverage.

The report also calls for increased funding of conservation programs.

By the way: White House climate adviser Gina McCarthy was president and CEO of NRDC before joining the administration. 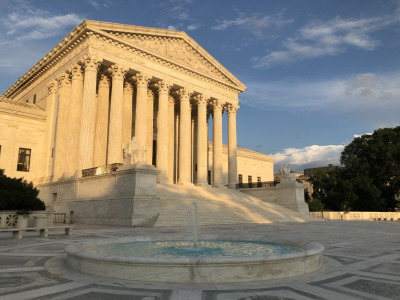 Friend-of-the-court briefs supporting a pair of Idaho landowners who are challenging the reach of the Clean Water Act are piling up at the Supreme Court, with filings from states, senators, congressional representatives and a wide variety of industries and farm groups.

Forty-four GOP senators and 155 House members have filed a brief that echoes other filings, such as the one from 14 major ag associations. The lawmakers called for “a limited federal regulatory presence in cooperation with the states” when EPA and the Army Corps of Engineers determine what constitutes a “water of the U.S.”

Chantell and Michael Sackett, whose case is expected to be argued in the fall, also have the backing of — among others — the National Cattlemen’s Beef Association and dozens of state affiliates, the National Association of Counties, National League of Cities, U.S. Conference of Mayors, the U.S. Chamber of Commerce and 27 states.

The Department of Health and Human Services is working to address the issue of political interference in scientific decisions at FDA and other agencies. A Government Accountability Office report found that HHS agencies currently lack procedures for addressing political influence.

In a letter included in the GAO study, HHS cited a report released in January on ensuring scientific integrity in the federal government, which says policies should apply not just to career employees and contractors but also to political appointees.

According to GAO, a few employees interviewed at the Centers for Disease Control and Prevention and FDA “stated they felt that the potential political interference they observed resulted in the alteration or suppression of scientific findings.

“Some of these respondents believed that this potential political interference may have resulted in the politically motivated alteration of public health guidance or delayed publication of COVID-19-related scientific findings.”

U.S. cotton exports to India are strong this year and trade could heat up further now that the country has dropped its 10% import duty over the next five months, according to USDA’s Foreign Agricultural Service.

The Indian government imposed the 10% tariff a little over a year ago, and prices for domestic cotton surged. Responding to complaints from the country’s textile industry, the government agreed to encourage more imports by suspending the duty until Sept. 30.

The U.S. exported $52.2 million worth of cotton to India in the first two months of 2022, nearly double the $26.2 million shipped in the same time frame last year, according to FAS data.

He said it. “President Biden's approval rating remains stuck at 42 percent, and if anything the political environment has deteriorated for Democrats since January as inflation concerns have soared and Build Back Better has stalled. That means no Democrat in a single-digit Biden (or Trump-won) district is secure, and even some seats Biden carried by double-digit margins in 2020 could come into play this fall, giving the GOP surprising ‘reach’ opportunities.” - Dave Wasserman of The Cook Political Report.