Democrats struggling to deal with voter concerns about inflation are using a cattle markets reform bill to make the case that corporate CEOs are to blame for rising prices. The two lead sponsors of the Cattle Price Discovery and Transparency Act are both Republicans, Deb Fischer of Nebraska and Chuck Grassley of Iowa.

Their bill, which would impose cash trade mandates on meatpackers, would “help our ranchers get a fair price, while consumers are not gouged at the supermarket,” said Senate Agriculture Committee Chairwoman Debbie Stabenow, speaking at the weekly Democratic leadership news conference on Tuesday.

“I would just say that Republicans talk and talk and talk, and we act and act and act,” Stabenow said. “We're going to continue to lead these efforts that are related to price gouging that is causing incredible prices that people are having to pay.” 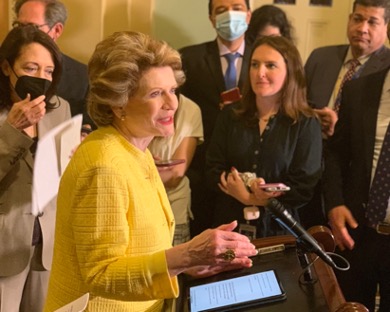 By the way: Stabenow spoke shortly after wrapping up a hearing on the bill, which is supported by a majority of the committee. Stabenow hasn’t announced plans for a committee vote on the measure.

For more on the Fischer-Grassley bill as well as prospects for OSRA being implemented once passed, read our weekly Agri-Pulse newsletter.

Sen. Joe Manchin, D-W.Va., has held talks this week with a group of lawmakers to probe the possibility of a bipartisan energy bill that might include elements of President Biden’s Build Back Better bill. It’s not at all clear whether Manchin’s latest effort has any legs.

Also uncertain is whether it could include the ag provisions that were in the BBB bill. They include substantial new funding for farm bill conservation programs.

A Republican who was in the meeting, North Dakota Sen. Kevin Cramer, tells Agri-Pulse a “very loose outline” of a possible bill omits the ag provisions. Cramer says they’re better left to the next farm bill, although that begs the question of where the funding would come from.

“I'm not much interested in a big, comprehensive Build Back Better bill that tries to combine all kinds of things with basically a Green New Deal,” Cramer said.

Farmers are paying high prices for fertilizer, but it’s also becoming increasingly difficult to even secure input shipments because of the unreliability of rail service, Deputy Agriculture Secretary Jewel Bronaugh said Tuesday in the first day of a two-day hearing held by the Surface Transportation Board.

“Union Pacific recently announced a cutback in the number of cars it has on line and we've heard reports that the railroad has asked fertilizer shippers to reduce their volume by 20%,” she said.

But, but, but: A spokeswoman from The Fertilizer Institute tells Agri-Pulse that individual companies have reached deals with Union Pacific to avoid the reduction in deliveries.

STB board member probes on intimidation

A member of the Surface Transportation Board probed witnesses about possible intimidation of shippers. Board Member Robert Primus wanted to know whether intimidation contributed to a low turnout from shippers at the hearing.

Justin Louchheim, the senior director for government affairs at The Fertilizer Institute, said in a non-competitive market rail shippers sometimes have to “stand behind the curtain” to protect relationships with the rail carriers.

Louchheim said after TFI sent a letter on rail service to the STB, the rail carrier called every one of TFI’s clients to ask why they didn’t go to the rail service first. He said the calls weren’t “completely belligerent,” and were — at least in part — made in good faith to resolve the issue.

Wheat prices are high this year in Argentina, but so are input costs – especially for fertilizer – and so USDA’s Foreign Agricultural Service says it’s expecting farmers there to plant less. The FAS office in Buenos Aires says in a new report that it expects a 6% decrease in wheat planting this year, but notes that local predictions see a decline by as much as 25%.

“There are many factors which are playing against an increase in planted area,” FAS says. “The most important is the significant increase in fertilizer prices, which adds $200 of cost per hectare. As wheat demands a large investment at a time where financing has gotten more expensive,” farmers may opt for a crop with lower input costs.

Elanco Animal Health is getting U.S. licensing rights to a feed additive developed by Royal DSM to cut methane emissions from cattle.

According to the companies, on-farm trials in 14 countries show the additive consistently reduces enteric methane emissions by about 30% in dairy cows and even higher percentages for beef cattle. Methane emissions from belching cattle are one of the largest source of greenhouse gas emissions from agriculture.

Elanco will be seeking U.S. regulatory approval for the product.

A former USDA cattle inspector faces a stiff prison sentence and up to $250,000 in fines after pleading guilty to accepting more than $40,000 in bribes from Mexican cattle brokers.

Roberto Adams, who was a lead animal health technician, was paid “to allow cattle into the country without proper quarantine or legitimate inspection,” the U.S. Attorney’s Office for the Southern District of Texas said. The bribes were paid over the course of at least 14 months.

He could get up to 15 years in prison.

He said it. “Who knew there was a limited market for wine that tastes like cigars?” - Pennsylvania Rep. Glenn “GT” Thompson, the ranking Republican on the House Ag Committee, talking to members of the North American Agricultural Journalists about a disaster aid program that included compensation for smoke-tainted grapes.