The Biden administration has come up with a novel plan to address the food crisis that’s resulting from the war in Ukraine. But the $500 million proposal to boost U.S. production of soybeans, wheat and other crops is almost certain to be significantly modified before it gets out of Congress, if it does.

The plan calls for temporary major increases in marketing loan rates to go with a $10-a-acre crop insurance subsidy that would be paid to farmers who double-crop soybeans and wheat.

USDA estimates the incentives would help U.S. farmers make up for as much as half of the wheat typically exported by Ukrainian farmers, according to a summary of the plan provided to Agri-Pulse.

But, but, but: The crop insurance incentive would primarily benefit a relatively small number of farmers in Alabama, Kentucky, Michigan and Ohio who can double-crop soybeans and winter wheat, says Chandler Goule, CEO of the National Association of Wheat Growers. Plus, farmers would have to plant a short-maturing soybean crop this spring in order to follow it with winter wheat this fall.

Goule said NAWG “is appreciative of the out-of-the-box thinking” on the administration’s part but will work with Congress to modify the plan.

The American Soybean Association said it was awaiting public release of more details, noting “Congress will review the proposed legislative changes and determine next steps.” 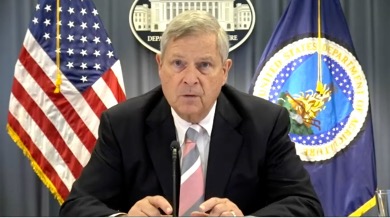 Agriculture Secretary Tom Vilsack told lawmakers USDA was successful in whittling down the cost of shipping a new tranche of food aid that was announced this week. But Vilsack said he’s still concerned that it will cost more to ship the food than it costs the government to buy it.

USDA will spend $282 million to buy commodities and another $388 million to get it to areas in Yemen and five African countries. The shipping costs are high in part because of cargo preference requirements that the food move on U.S. carriers.

“I'm not sure that I have the authority as secretary to waive those provisions,” Vilsack told the House Agriculture Appropriations Subcommittee.

Nominees nearing for USTR and USDA

Vilsack said USTR Katherine Tai recently interviewed three people for the position in her office. “I know two of the three people that she interviewed, and I can assure you that both of those individuals are highly qualified for that job,” Vilsack told Rep. David Valadao, R-Calif.

Vilsack said the White House was also “in the final stages getting a nominee” for the USDA position.

DeLauro, D-Conn., says FDA waited two months after receiving a “damning” whistleblower report about an Abbott production facility before interviewing the person who sent it to the agency.

The former employee at Abbott Laboratories’ Sturgis, Mich., plant alleged falsification of records, the release of untested infant formula, and the hiding of information during a 2019 FDA audit. The contamination led to the deaths of two infants.

FDA says: “We know there have been questions about the timeline related to the Abbott Nutrition infant formula recall. However, this remains an open investigation with many moving parts. Our top priority is ensuring that any recalled product produced at the Sturgis, Mich. facility has been removed from the market.” Abbott Labs didn’t respond to a request for comment.

EPA moves to end most uses of weedkiller

EPA is proposing to ban the use of the herbicide diuron on all food and feed crops because of human health concerns. All food and feed tolerances would also be revoked except to support the continued use of the chemical as a harvest-time defoliant in cotton.

In a proposed interim decision, the agency says there are many alternative herbicides available for crops such as asparagus, blueberry and citrus.

House Dems said to be holdup on shipping reforms

Speaking on this week’s Agri-Pulse Newsmakers, Rep. Dusty Johnson, R-S.D., says “there are more areas of agreement between the House and Senate than there are areas of discrepancy,” but that several Democrats believe “the Senate bill doesn’t do enough.”

That makes it likely OSRA will be negotiated as part of a much larger China competition bill rather than passed as a standalone bill, said Johnson. He was the lead GOP sponsor of the House version of OSRA.

By the way: Johnson indicated it’s unclear what the House will do on cattle market reforms this year, and he'd like to see the Senate take action on a House-passed bill to create a cattle contract library.

“We really need the Senate to be willing to take this first step with us, and then let's talk about what the second step looks like,” Johnson said.

Newsmakers posts at noon at Agri-Pulse.com.

Chemicals cast off by Russia’s military are polluting the soil while bombs are destroying billions of dollars of ag storage, processing facilities, tractors and other machinery – not to mention livestock and crops – a Ukrainian representative told members of the World Trade Organization’s agriculture committee this week, according to a Geneva trade official.

Some $6.4 billion worth of Ukrainian ag infrastructure and resources has been destroyed so far, the Ukraine representative said.

Russian WTO representatives at the session raised repeated objections, complaining that the WTO was not the proper venue for such concerns, the Geneva official said.

He said it. “This is a marathon. If we don't ever take that first step, we're never going to cross the finish line.” - Rep. Dusty Johnson, R-S.D., on the need for the Senate action on cattle policies.

Clarification: A previous version of this article reported Rep. Dusty Johnson, R-S.D., was calling on the Senate to move forward with consideration of the Cattle Price Discovery and Transparency Act. Johnson's staff has clarified that he was referring to desires for the chamber to advance the Cattle Contract Library Act.