The Agriculture Department is considering possible changes to the Whole Farm Revenue Protection program to increase the appeal of a product that allows farmers to insure their entire operation under a single policy.

WFRP has seen a decline in enrollment in recent years after being formally authorized in the 2014 farm bill. It grew out of the former Adjusted Growth Revenue and AGR-lite pilot programs that date back to 2008.

Sales of WFRP have fallen every year since peaking in 2017 with 2,833 policies. This year, some 1,815 have been sold, 712 of which were purchased in a single state, Washington, according to the latest weekly report posted by USDA’s Risk Management Agency.

“We really believe that it is a concept that has the potential to incentivize broader diversification across the food system, across the farming landscape,” said Billy Hackett, the crop insurance specialist for the National Sustainable Agriculture Coalition, one of WFRP’s strongest advocates.

NSAC viewed the program as a tool that would appeal to small and mid-size diverse farms and also hoped it would encourage other farms to add additional crops or livestock in ways that might seem too risky without insurance. 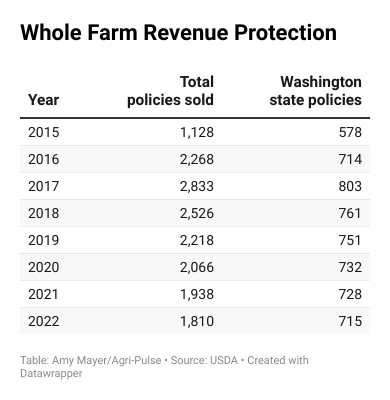 But the program is complicated, many farmers remain unaware of it, and those who might be interested often have a hard time finding an agent who is willing and able to write a policy, Hackett said.

He said NSAC has had an ongoing and constructive dialogue with RMA, tapping information each has received from both producers and insurers, with the shared goal of improving the program.

“I have listened to feedback from agents and producers alike that some of the reporting requirements for Whole Farm are cumbersome,” RMA Administrator Marcia Bunger said in an interview with Agri-Pulse.

She said RMA is looking at ways to reduce that “pain point,” which can be a hurdle both for producers and insurance providers.

RMA has instituted some changes in response to farmer and insurance provider feedback, including increasing the policy limits for aquaculture, livestock and nurseries and adding a microfarm option that doesn’t “have the same reporting requirements as we do with our Whole Farm policy," Bunger said. "The coverage levels will be attractive. We allow them to purchase at 85% without providing additional paperwork."

She’s already heard that the $100,000 cap for microfarm is too low and said RMA will look at increasing that and other ways of improving upon the pilot.

A recent study posted by RMA shows WFRP is difficult for many small farmers to use because of the record-keeping requirements and the fact that it relies on wholesale pricing that is often much less that prices in direct-to-consumer markets, Dean Strasser, director of field services for National Crop Insurance Services, wrote in the analysis.

Washington state has led the way in WFRP largely because it is the only real insurance option for apple growers, said Hackett.

In reviewing data about the WFRP program, Hackett found that Washington apple growers’ recent challenges have meant the state has had high indemnities, often leading the program to a loss ratio greater than one — meaning premiums did not exceed payouts. WFRP could be deemed actuarily sound, if Washington were removed from national loss ratio calculations, Hackett said.

Washington apple growers have faced a number of financial challenges in recent years, including retaliatory tariffs in key export markets, supply chain disruptions and some losses from heat damage in 2021, according to the Washington State Tree Fruit Association.

RMA regularly evaluates whether insurance products are actuarily sound and can make adjustments in one region while leaving the others unchanged.

Actuarial soundness “is evaluated based on long-term performance, considering program improvements and actuarial updates that have occurred since the program’s inception, not just historical loss ratios reported in summary of business data,” RMA said in a statement.

“Experience in a given area is evaluated in the context of that area and does not impact other areas.”

Paperwork requirements remain a barrier to participation for WFRP.

On the underwriting side, an insurance agent likely will spend more time developing a WFRP policy than a conventional one. Sometimes, agents “just don’t have an interest in selling the policies because the compensation structure is based on total value of the policy sold rather than time spent writing said policies,” Hackett said. 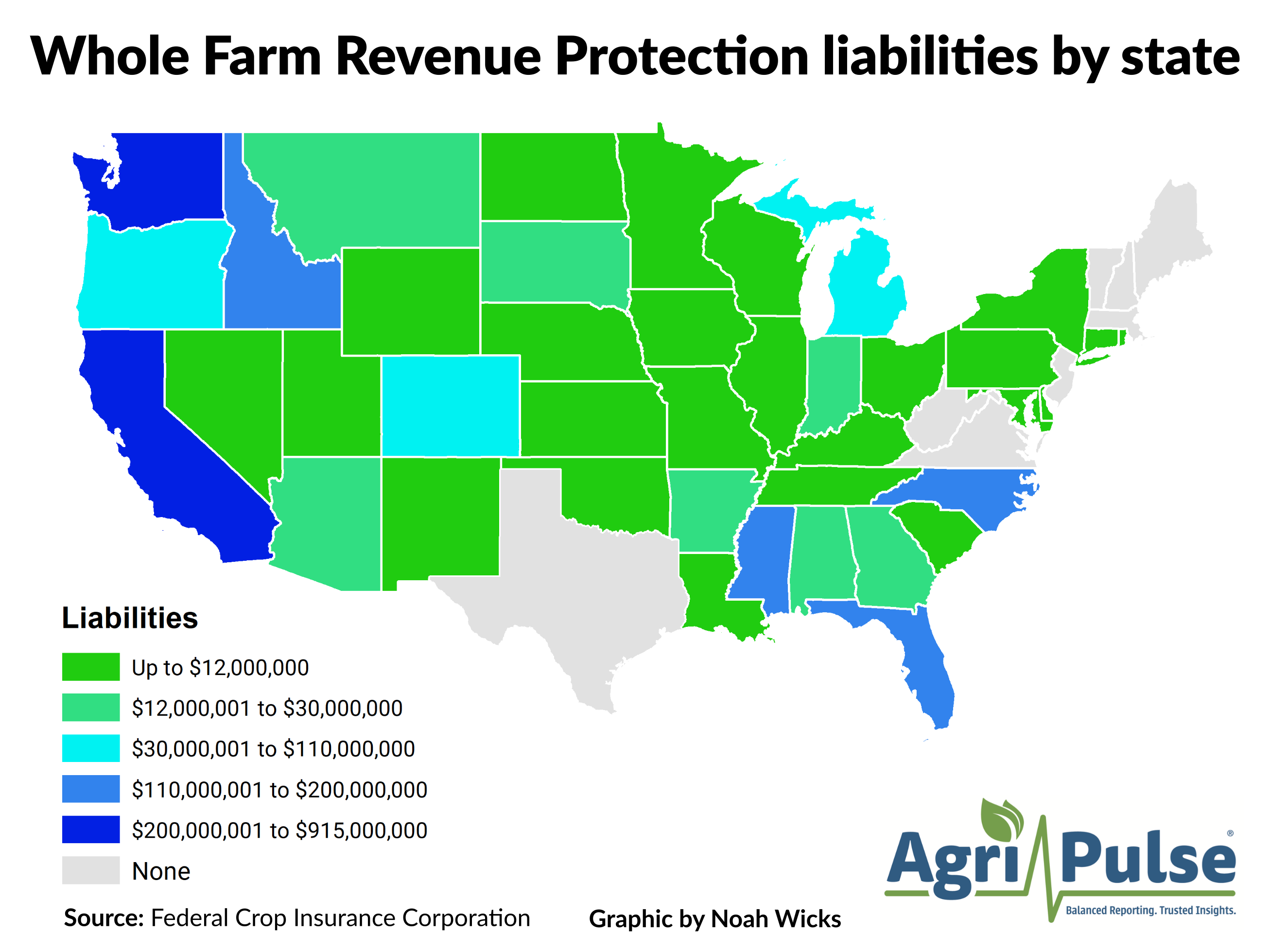 A $8.5 million cap on the amount of revenue that can be insured under a WFRP policy can limit its attractiveness for large, diversified specialty crop producers who otherwise might benefit from the product because of the number of crops that can be covered.

Bunger sees WFRP as an entry point into the crop insurance system for some small to mid-size farms.

“It’s a good way for those producers to get introduced (to crop insurance), and at the same time have a meaningful type of coverage for their operations,” Bunger said. As they grow, “some of the other policies that are available then become a better fit.”

If that leads to a reduction in WFRP policies, Bunger said, she’d still consider WFRP to be a success because RMA’s goal is to provide risk management to as many farmers as possible, regardless of which products they choose.

The administrative and operating subsidy for WFRP already is the highest rate allowed under the Standard Reinsurance Agreement, RMA said in a follow-up email. That could be changed if the SRA is renegotiated or if Congress requested it. WFRP also receives some of the highest premium subsidies.

Hackett says NSAC remains hopeful WFRP can become a more widely used and beneficial tool, in particular for farms trying to diversify. That has always been the goal, he said, and WFRP approaches it in a way that is responsible to taxpayers. “Tying diversification to the program is a way to guarantee farms are becoming less risky,” he said.