Daybreak May 11: Fertilizer funding to double

President Biden is announcing new measures today to address food price increases and the war in Ukraine. The measures include doubling the amount of funding for domestic fertilizer production to $500 million and increasing technical assistance for adoption of precision agriculture methods.

USDA also will start insuring double cropping in up to 681 more counties, bringing the total eligible counties to 1,935.

"As the world’s second largest exporter of wheat and soybeans, these actions will help grow new markets for American-grown food, supporting jobs in rural communities across America,” according to a USDA fact sheet.

Biden is visiting an Illinois farm today to draw attention to the impact the war is having on global food supplies.

Keep in mind: Tuesday night, the House approved a $40 billion aid package for the Ukraine war that omits key agricultural provisions the president had sought.

Lawmakers rejected proposals the White House made to increase marketing loan rates and pay farmers to double-crop soybeans and wheat. A third idea, floated by House Ag Democrats to encourage cropping of prevented planting acres, also failed to get enough support to make it in the spending bill.

For more on what what’s in the bill, read this week’s Agri-Pulse newsletter. We also have a report on how Ukraine’s farmers are responding during wartime, and we look at enforcement of federal wage regulations and the EPA’s future approach to setting biofuel usage targets. 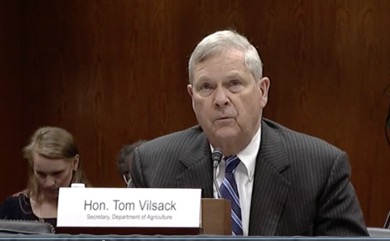 USDA has received more than 450 applications for funding under the $1 billion Partnerships for Climate-Smart Commodities program. Agriculture Secretary Tom Vilsack told the Senate Agriculture Appropriations Subcommittee that the applications are seeking a total of $3 billion to $4 billion.

Vilsack says USDA is gearing up to take applications for crop disaster aid, and that payments are expected to go out next month.

Vilsack told the senators that the department is using data from crop insurance and the Noninsured Crop Disaster Assistance Program (NAP) to automatically fill in most of the information that’s needed on farmer application forms for the WHIP-Plus program.

Vilsack says the government needs to determine the extent to which PFAS chemicals are contaminating farms and threatening the safety of food.

Daybreak May 12: Biden: G7 seeking to boost fertilizer supplies
Daybreak May 11: Key Dem: ‘Have to do more’ for farmers

“We're working with EPA to try to establish a national standard on what is an acceptable level or not of PFAS,” Vilsack told Sen. Susan Collins, R-Maine, during the Appropriations hearing. “And the reason for this is so that we can basically help to define the level of assistance and help that's required.”

Vilsack said PFAS contamination is pervasive, “because basically sludge was used to fertilize farm fields for many, many, many years without an understanding and appreciation of the challenge.”

By the way: Maine farmers struggling with PFAS contamination will be getting some help from a fundraising effort led by a restaurant, Maine Farmland Trust and the Maine Organic Farmers and Gardeners Association.

The $1 million fund will help pay for initial PFAS testing on farms, mental health resources, and also provide short-term income replacement for farms that the state’s agriculture department has identified as having high test results.

The Biden administration has made no moves so far to begin negotiating any new trade agreements, prompting 24 Republican senators to express their frustrations in a new letter to Vilsack and U.S. Trade Representative Katherine Tai.

“The lack of ambitious market-opening initiatives not only disadvantages U.S. workers, farmers, ranchers, and businesses today, it jeopardizes America’s competitiveness, resilience, and security in the long-term,” the senators wrote in the letter. “America cannot afford to sit on the sidelines in trade … Opening new markets for customers, reducing barriers for business, and enforcing robust trade agreements are cornerstones of our national prosperity.”

The senators stress in the letter that the Biden administration could do a great deal to increase international trade by adding market access provisions to its wide-ranging Indo-Pacific Economic Framework, or IPEF.

“The failure to include such commitments puts American exporters, including agricultural producers, at a competitive disadvantage in the global market,” the senators say in the letter. “It also signals to the world that the United States is not committed to fully engaging commercially or strategically in the region.”

The Russian military has stolen about $125 million worth of Ukrainian grain in territories held by invading forces, according to the Ukrainian Agriculture Ministry. Much of that stolen grain is being exported after it was sent to the Russian port of Sevastopol, and the Ukrainian government is asking Western nations to help reacquire it.

Government and ag industry officials in Ukraine tell Agri-Pulse that one ship full of pilfered Ukrainian wheat was shipped to Egypt, but authorities there rejected it after being alerted to the situation. It’s unclear where that ship went next. Spokespersons for the Egyptian government did not return calls for comment.

She said it. “My concern about fire in the last 10 years has just gone straight up. I see these fires, and I see what can happen.” - Sen. Dianne Feinstein, D-Calif., questioning Ag Secretary Tom Vilsack about funding for wildfire issues.