Farmers are catching up fast on planting, although there continue to be significant delays in North Dakota and Minnesota affecting both corn and spring wheat.

As of Sunday, 72% of the U.S. corn crop had been planted, according to USDA’s weekly Crop Progress report.  The average rate at this point is 79%. A week ago, farmers had planted just 49% of the 2022 crop.

Farmers who haven’t been able to plant because of the wet weather in the northern Plains could soon start filing prevent-claims on their crop insurance if they think it’s a better deal than planting a late crop that is likely to have lower yields.

Just 49% of the spring wheat is planted, compared to the normal rate of 83%. Just 27% of the crop has been planted in North Dakota and only 11% in Minnesota.

At the same time, much of the nation’s winter wheat crop continues to be in bad shape. Some 24% of the crop is rated very poor and 17% as poor. In parts of the southern and central Plains, the numbers are even worse. Some 79% of the Texas winter wheat crop, 54% of the Colorado crop and 46% of the Oklahoma crop is in poor to very poor condition.

About 40% of the Kansas crop is in poor or very poor condition. 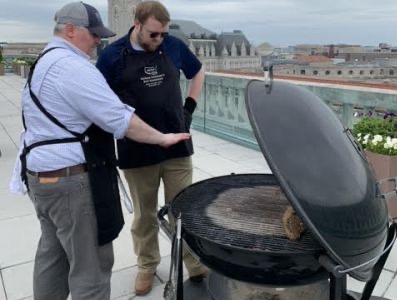 National Cattlemen’s Beef Association lobbyist Kent Bacus and Agri-Pulse Managing Editor Spencer Chase at an NCBA event Monday for a group of veterans from California in Washington, D.C., for an Honor Flight trip.

The National Grain and Feed Association and Renewable Fuels Association are backing a proposal by the Surface Transportation Board to address acute service emergencies, but would like to see some changes.

NGFA said in a news release that it is supporting the proposal’s provision to shorten the process for petitions for emergency service orders “but suggested that the board make it mandatory for an identified alternative carrier to reply to the petition.”

RFA also said it’s supportive of the proposal but said the newly proposed timeline for petitions is still too long.

“On-site storage for ethanol at a typical ethanol plant is less than one week’s production,” RFA President and CEO Geoff Cooper wrote to the board. “Thus, trimming only a few days off of the petition process does not fully address emergency issues at facilities that could still be forced to shut down due to the lack of power to pull full cars or return empties.”

Reply comments on the proposal are due by June 6.

Japanese Prime Minister Fumio Kishida on Monday took the opportunity during a joint press conference with President Joe Biden to ask him to bring the U.S. back into the Trans-Pacific Partnership trade pact. That’s something that a lot of U.S. ag exporters would like to see happen, but Biden administration officials continue to throw cold water on the idea.

When asked by reporters why the U.S. isn’t considering joining the Pacific Rim trade pact, U.S. Trade Representative Katherine Tai called it too “fragile.” She stressed that the Biden administration’s Indo-Pacific Economic Framework, by contrast, “will link major economies and emerging ones to tackle 21st century challenges and promote fair and resilient trade for years to come.”

Tai has called traditional free trade agreements like the TPP “20th century” trade tools and on Monday said that trade pacts which focus on tariff reduction “are very much a part of the practice that has brought us to where we are, both in terms of the fragility of where that trajectory has taken us.”

U.S. farm groups issued statements Monday in praise of President Joe Biden’s announcement that 12 countries have signed up to be part of the U.S.-led Indo-Pacific Economic Framework, but ag exporters need to know a lot more about how the effort will help increase trade to some of the fastest-growing international markets, according to Farmers for Free Trade.

“The Indo-Pacific Economic Framework is a laudable first step to reengaging in the region,” says Brian Kuehl, the group’s executive director. “However, it will be essential that the administration articulate how an agreement that does not currently include tariff reduction will provide new market access and economic opportunities for farmers. As negotiations progress, we encourage the administration to speak directly to farmers, food producers, and rural Americans about how IPEF can directly benefit them.”

Farmers, Kuehl said, are still sore from losing out when the U.S. removed itself from the Trans-Pacific Partnership trade pact.

The second EPA/Army Corps of Engineers roundtable on how to define “waters of the U.S.” under the Clean Water Act included clashing viewpoints from a diverse set of stakeholders.

Ray Gaesser, an Iowa farmer and member of the Iowa Soybean Association and Solutions from the Land, joined with Illinois corn growers and a representative of the Home Builders Association of Kansas City in opposing a WOTUS definition including ephemeral and intermittent streams. Environmental reps, however, including a North Dakota farmer representing a local Sierra Club chapter, contended that all waters are connected and advocated protection for isolated wetlands as well as all streams, even if they do not flow year-round.

Lilias Jarding, however, of the Black Hills Clean Water Alliance in South Dakota, said the ever-changing definitions of WOTUS have made it difficult to protect ephemeral and intermittent waterways.

Monday’s roundtable, which focused on the Midwest, can be viewed here. The schedule for the remaining roundtables is here.

They said it: “The U.S. EPA has consistently found that glyphosate-based herbicides can be used safely and are not carcinogenic, in line with leading regulators worldwide. If the Ninth Circuit Court of Appeals’ decision in Hardeman is left standing, it would undermine the ability of companies to rely on official actions taken by expert regulatory agencies and to meet today’s pressing food security and environmental challenges” – Bayer, parent company of Monsanto, in a statement Monday on the filing of its final brief seeking review of a Ninth Circuit decision that upheld a damages award for Roundup exposure.

The filing came the same day that ag groups called on President Biden to withdraw a Solicitor General brief recommending denial of the petition.
.
Philip Brasher and Bill Tomson contributed to this report.