Heavy precipitation over portions of the Plains and Northwest have provided some relief from the ongoing drought. But the Texas panhandle and much of the West remain very dry, according to the latest U.S. Drought Monitor. 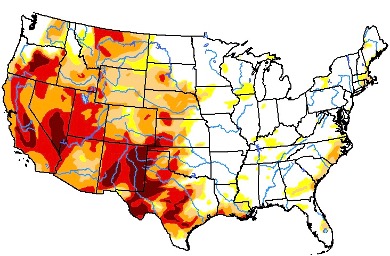 Central Kansas was one of the regions to see the most improvement. About 33% of the state is now classified in severe to exceptional drought; more than 44% of the state was rated that way last week.

Take note: California has seen no improvement at all: Nearly 98% of the state remains in severe to exceptional drought, the same share as last week. At this time last year, 95% of the state was in that condition.

By the numbers: 63%. That’s the average cost share the federal government will pay for crop insurance premiums from 2023 through 2032, according to the latest cost estimates from the Congressional Budget Office. Farmers are expected to pay about $3.7 billion a year in premiums.

The total federal cost of the program over 10 years is projected at $80 billion, down $15 billion from CBO’s July 2021 forecast, accordion to an internal analysis of the latest CBO baseline by the Senate Ag Committee’s GOP staff. The reduction is due to an expected decline in insured corn and wheat acres.

In North Dakota and northern Minnesota, the problem is too much, not too little rain. And Sen. John Hoeven, R-N.D., continues to push USDA to offer payments to farmers to offset the reduction in crop guarantees farmers face due to late planting.

In an Agri-Pulse Newsmakers interview, Hoeven confirmed what we reported earlier this week that the idea is under “serious consideration” at the department.

“Right now, with the problem that we have with inflation across the board, and of course food inflation, we need our farmers putting those crops in the ground,” said Hoeven.

This week’s edition of Newsmakers will post today at Agri-Pulse.com.

USDA’s announcement of a substantial sale of new crop soybeans to Pakistan is a good sign for international demand ahead of this year’s harvest, says Mac Marshall, vice president of market intelligence at the United Soybean Board and U.S. Soybean Export Council.

USDA reported sales of 352,000 metric tons of U.S. soybeans to Pakistan, 297,000 tons of which is for delivery in the 2022-23 marketing year. It’s the largest single-day sale to Pakistan announced at this time of year for new crop soybeans in the past decade, said Marshall.

The sale is “reflective of both overall demand strength for U.S. soybeans and the considerable growth of Pakistan as a buyer,” he said. 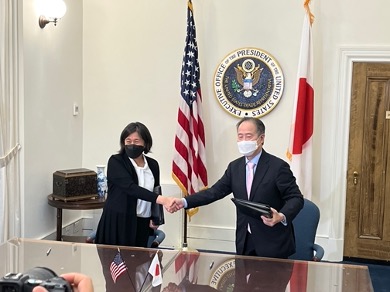 US and Japan hold ceremony for beef trade agreement

U.S. Trade Representative Katherine Tai and Japanese Ambassador Koji Tomita have signed a deal struck in March to reduce the threat of interruptions of U.S. beef exports. The agreement inked Thursday makes it less likely that Japanese safeguard measures will kick into place and raise tariffs on U.S. beef.

The agreement adds two additional measures that could prevent Japan’s trade-volume trigger from being activated by high levels of U.S. beef shipments.

Under the current and emergency regulations, when temperatures are above 89 degrees, employers must give workers access to shade and provide enough cool water for each employee to drink at least a quart an hour.

The Arizona Farm Bureau and other groups and government agencies in the Southwest are pleading for clarity from EPA and Army Corps of Engineers on a new “waters of the U.S.” definition under the Clean Water Act.

AZFB President Stefanie Smallhouse and others participating in the latest WOTUS regional roundtable on Thursday said the agencies’ December proposal was overbroad, and she said Arizona should have the lead on protecting non-navigable waters such as ephemeral and intermittent streams.

Smallhouse said the input the agencies are getting at the roundtables should be “seriously considered in a meaningful way” when that rule is implemented.

An EPA official emphasized that the comment period is closed on the latest proposal.

Another ag voice: “We can't continue to operate farms and ranches if we're constantly having to try to get permits and what-not for what we do,” said Carlyle Currier, a rancher in western Colorado representing the Colorado Ag Water Alliance, which includes most of the state’s big farm groups.

She said it. "If we want to make these markets flourish, there can be no room for greenwashing or double counting of credits. In other words, there should be no room for fraud.”- Bella Rozenberg, senior counsel and head of regulatory and legal practice group for the International Swaps and Derivatives Association, on voluntary carbon markets.

She was speaking during a Commodity Futures Trading Commission hearing on the issue.