The California Air Resources Board is proposing its most ambitious regulation yet with a ban on new gas-powered cars by 2035, implementing a controversial executive order from Gov. Gavin Newsom. If adopted, California would once again lead the nation in emissions standards, modeling a policy approach that several other progressive states are watching closely—a combined market that covers about 40% of all U.S. vehicle sales.

A nine-hour hearing on the rulemaking last week drew excitement and moderate skepticism from board members as well as a range of responses from more than 100 public commenters. Environmentalists pushed the board to go further, requiring 75% of sales to be zero-emission by 2030, while agricultural groups offered other approaches that would protect farm revenues in other states.

“Even as alternative technologies flourish, liquid fuels will continue to play an important role in the transportation sector for decades to come,” said Chris Bliley, senior vice president of regulatory affairs at Growth Energy. “It's imperative to consider the vital role that environmentally sustainable fuel options, such as bioethanol, will play in reducing greenhouse gas and air toxic emissions.” 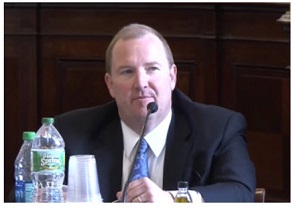 Bioethanol blends like E15 and E85 reduce consumer costs at the pump, since E15 is consistently less expensive than regular gasoline and E85 is currently selling for $2 per gallon less than gas, according to Bliley.

Kathy Bergren, director of public policy for the National Corn Growers Association, said the state would see further benefits with ethanol if CARB allows for sales of plug-in electric hybrid vehicles to continue after 2035.

She argued that E85 would also support the agency’s environmental justice goals by lowering local air pollution while avoiding added costs to the purchase of a vehicle—a major criticism CARB has faced when attempting to incentivize low-income residents to purchase clean vehicles.

In presenting the proposal to the board, CARB staff noted that it would substantially reduce the statewide consumption of ethanol fuels.

California farmers and ranchers, meanwhile, worried about adding more costs to energy rates that are already much higher than their competitors’ and questioned whether the state’s electric grid could keep up with the demand. The average retail price for electricity in California is 18 cents/kWh, substantially higher than the 10.44 cents/kWh in Arizona and 8.36 cents/kWh in Texas, according to the Energy Information Administration.

“Currently, our members and their employees already face interconnection hurdles, without this added burden,” said Katie Little, a policy advocate for the California Farm Bureau. “If there is not enough grid capacity to operate water pumps and basic farm equipment, how can we expect enough additional capacity for electric charging vehicles for on-farm and employee transportation?”

Little argued the proposed regulation has not addressed rural utility availability and capacity.

“Without a massive investment in rural California, we will be left quite literally in the dark,” she said.

Farm employees who travel long distances for work may not be able to charge their electric cars for the return trip, especially in remote regions prone to power outages, rolling blackouts and public safety power shutoffs during dangerous fire weather. Little went on to say that pickups and other passenger vehicles on farms must traverse rugged terrain on a regular basis and last the whole work shift. The majority of electric vehicles can travel between 250-350 miles before they need a recharge.

“Taking these vehicles out of use to charge is impractical and will cut into productivity,” said Little, adding that rural regions also lack qualified mechanics for such advanced technology.

She charged the regulation would raise food prices further and impact food security in the Golden State—a widely shared concern among farm groups.

“We cannot accept false solutions that ignore and leave behind California’s agricultural industry,” wrote Manuel Cunha, president of the Nisei Farmers League, in a letter to the board on ACC II. “We want to be a part of the solution—but we can’t be a part of that solution if we can’t get to work.”

Cunha, who has collaborated with CARB and local air districts for several decades on reducing emissions in farming regions, called the regulation “a misguided, rushed attempt to oversimplify a solution” that does not consider impacts outside of the state’s largest cities. He argued it would cause economic pain to growers and farmworkers alike.

“I have not spoken to one farmworker who is actually for it,” said Jeff Gonzalez, an advocate for the Fresno-based labor group. “More than anything, they want to be able to afford to buy food, have appropriate housing, adequate health care and transportation.”

Tulare County resident Sherry Chavarria, who works for the local Democratic party, struggled to hold back tears when describing conditions in Dinuba, a city with more than a quarter of its 25,000 residents in poverty, and the financial impacts the regulation could carry.

Equity was a primary concern for board members, who probed staff for more than an hour over a provision that would mandate the cars maintain at least 75% of their range for the life of the vehicle. This would help to build confidence in consumers for their purchases and also stimulate a second-hand sales market for lower-income Californians. But ensuring longer-lasting, higher-quality batteries would likely raise the price tag, excluding many of those communities from the marketplace, though the proposal does include a complex crediting system for dealers selling cars through community-based organizations. The regulation would also require electric vehicles to have a range of at least 150 miles for a single charge.

Board Chair Liane Randolph acknowledged the regulation could not completely address these issues and more work will be needed after CARB approves the final draft in August.

“This regulation, in and of itself, is not sufficient to get us to where we need to go,” said Randolph.

In response to a slew of concerns raised by various industries, board member Daniel Sperling, an engineering professor at the University of California, Davis, said he supported the overall goals and trajectory of the proposal but acknowledged he was sensitive to the rapid transformation called for in the regulation.

“It's going to be disruptive across many industries—not just the auto industry, not just the oil industry,” said Sperling, while calling it the most important action the board will ever take.

To that end, Kevin Abernathy, who directs regulatory affairs at the Milk Producers Council, delivered a cautionary tale to the board for the cost challenges to come.

Abernathy has worked closely with the San Joaquin Valley Air Pollution Control District, a quasi-independent branch of CARB that governs nontransportation emissions in California’s rich agricultural region. Dairy farms have been investing in technologies like anaerobic digesters to reduce methane emissions and add new revenues through biogas production. This has led many farmers to invest in trucks running on compressed natural gas, which helps them comply with CARB’s heavy-duty truck rule.

“We have the want, but the reality is the technology and supply chain constraints are very daunting,” said Abernathy. “The price quotes that we're receiving are unbelievably outrageous.”

Diesel-powered Class 8 trucks costing $130,000 now come with a $59,000 premium for those who are able find a build slot—a fee manufacturers have added to offset supply chain constraints. Meanwhile, a truck running on “renewable cow gas” costs $236,000, while an electric truck runs more than $300,000 higher than a standard diesel version. And constructing a fuel cell project to generate electricity for that truck costs $491,000.

With both electric and natural gas, “we do not have fueling infrastructure in rural California to bring these to fruition,” said Abernathy. “The unintended consequences of the inflexible deadlines with a one-size-fits all approach will be catastrophic to the vast majority of rural California and Central Valley folks in the communities that provide the food security for our world.”