Speaking at the California Dairy Sustainability Summit on Friday, Isom said energy costs, combined with other regulatory expenses, have led tree nut processors to move operations out of state to remain competitive, going as far as Texas. Many are saving money by hauling California-grown almonds over the mountains to process in Nevada and then trucking them back to the Port of Oakland for exporting.

He pointed out that Pacific Gas & Electric (PG&E) and Southern California Edison are considering “even more dramatic” rate increases. PG&E held public hearings on Friday to consider an increase for agricultural customers ranging from 2.5% to 10%, or even higher, according to the California Farm Bureau Federation.

“We're going to see that probably for the next 10 years at least,” said Isom. “We’ll see huge increases in electric rates.”

Utilities are racing to upgrade the system to prepare for more intense wildfires, spending billions to replace wire transmission lines and towers and install microgrids to maintain power in communities during public safety power shutoffs (PSPS).

“We're going to bear the brunt of all that cost,” said Isom. “That's probably the biggest driver right now.” 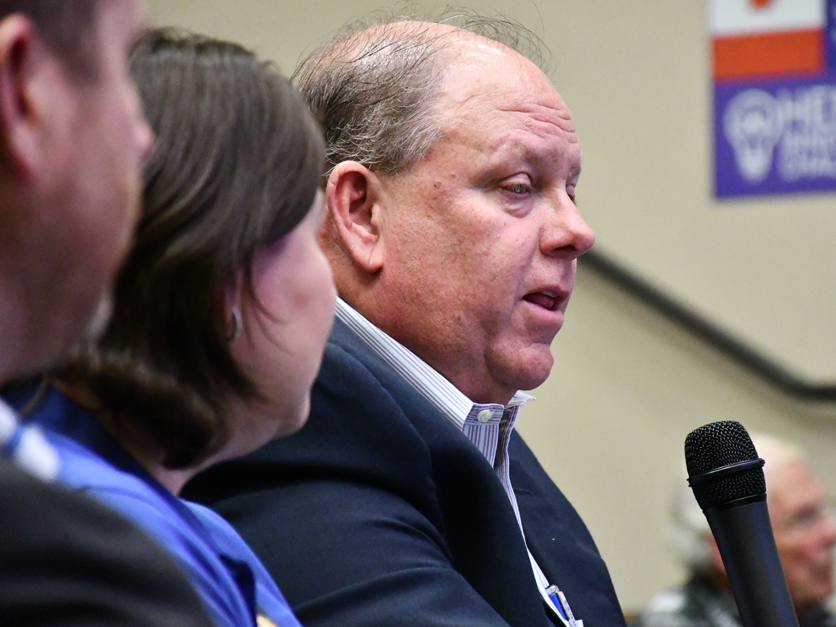 California’s push for solar and wind power has contributed to the rising costs, since these replace cheaper sources, like natural gas, coal and even nuclear power. Utilities have their own regulatory costs to account for as well, added Isom.

“We are talking about California, and there isn't anybody here that isn't regulated in some form or fashion,” he said. “Utilities are no exception.”

The energy companies have had to purchase carbon offsets in the state’s cap-and-trade market, which could come at a higher price if the Newsom administration and Legislature agree to reopen rulemaking for the program.

When asked what processors and farmers should be doing to prepare, Isom had one word: “Move.”

For others, he recommended investing in solar generation.

“I don't know that I've got a huller member that hasn't either installed solar or is in the process of putting solar in,” he said. “I would encourage anybody and everybody to at least look at it, at least run the numbers.”

Solar cuts costs for agricultural ratepayers by about 80%, according to Glenn Bland, a founder and board member for CalCom Solar, which specializes in solar energy for farms. Rates drop from 15 cents per kilowatt-hour to about three cents and maintain that level as utility rates continue to rise, he said. Tax credits and reductions in sales taxes add more incentives.

Solar adds more reliability during PSPS events, which threaten to destroy entire loads for processors and damage crops when irrigating, said Isom. Mike Newland, an agricultural director at the Propane Education & Research Council, added that agriculture in the Golden State is at particularly high risk during these events.

“California is not dealing with corn and soybeans. They're dealing with high-value crops,” he said. “If something does go down, it's a bigger deal in California.”

Installing emergency generators is not a long-term solution, since the Air Resources Board (CARB) has strict limits on run times for generators. Newland said one cost-effective solution that does not rely on a grid is propane. His organization has been working with equipment manufacturers to develop propane engines.

“Propane burns incredibly clean, to the point where we see maintenance intervals on engines double and triple, because we're just not getting deposits built up,” he said.

Newland explained how a biofuel blend of propane known as DME has been gaining traction in California, since it is derived from feedstock and considered renewable. Isom, meanwhile, noted that some smaller processors have found success with pyrolysis, a processing for converting feedstocks into fuel to power facilities, though it is often expensive and complicated.

While Bland predicted that all of these solutions will play a role going forward, Isom questioned the future of any renewable fuels in California now that the governor is setting “impossible goals” like banning combustion engines. The widening disconnect between the state’s elected leaders and agriculture, Isom said, is further strained by a new disconnect between the administration and the energy industry.

“I've been doing this for over 35 years now in California, and specialize in environmental and resource and energy issues,” he said, “and I'm not sure where this state is headed these days.”