Air board races to keep pace with emerging agtech trends

Along with new technologies like electric tractors, agriculture is generating creative ways of squeezing more efficiency and cost-effectiveness out of combustion engines. This is posing new obstacles for the California Air Resources Board (CARB) as it updates criteria for replacing older agricultural equipment with lower-emission models through a grant program known as FARMER. But a proposal to subsidize expensive new tractors is sparking fears over costs, reliability and a rise in equipment thefts.

CARB launched FARMER, or Funding Agricultural Replacement Measures for Emission Reductions, in 2018 with $135 million from the state budget to support local air districts in replacing harvesting equipment, heavy-duty trucks, agricultural pump engines, tractors and other equipment. The region benefiting the most from the program has been the San Joaquin Valley, which must reduce agricultural emissions by 2024 to meet federal air quality standards.

The program has replaced about 8,000 tractors since its inception and the nonpartisan Legislative Analyst’s Office estimates FARMER is among the state’s most cost-effective programs for reducing near-term criteria air pollutants. At a cost of about $9,000 for every ton of pollution that would otherwise be emitted, FARMER is far below the hundreds of thousands of dollars per ton for most other programs.

FARMER is set to receive $150 million this year as part of a 2021 budget agreement. And Gov. Gavin Newsom is proposing a $6.1 billion package to support zero-emission vehicles and infrastructure, which could boost funding for the program further.

Staff have routinely modified project categories to better reflect the needs of farmers and are now proposing to incorporate zero-emission off-road equipment and a local pilot program aimed at supporting small farmers. While the districts would still have discretion to choose which projects to fund, this would broaden their options. 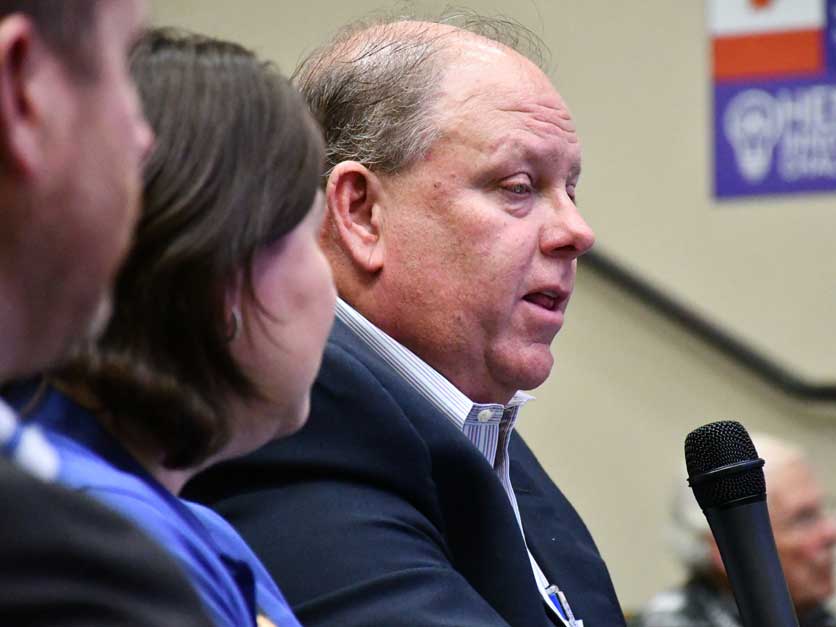 The category for zero-emission technologies would likely include forklifts, tractors and other equipment with about 25 to 50 horsepower, along with Level 2 chargers and battery packs, since they are critical for operating the equipment. CARB staff have noticed that some farmers in the program have been willing to scrap larger equipment and downgrade to ones with less horsepower.

The state would fund $66,000 per ton of emission reductions and up to 80% of the total cost, while farmers could access more funding through other local, state and federal programs.

During a hearing last week on the proposal, Roger Isom, the president and CEO of both the California Cotton Ginners and Growers Association and the Western Agricultural Processors Association, noticed that the proposal represents a significant change in the state’s suite of incentive programs. FARMER has traditionally been limited to replacing diesel engines, but this would expand that to propane forklifts. The move would support CARB’s effort to draft regulations for accelerating the deployment of zero-emission forklifts throughout California.

“There is very limited funding available for the conversion of propane to electric forklifts,” said Isom during a February stakeholder workshop on the forklift proposal. “Incentive programs need to be an integral part of this process.”

Rakesh Koneru was also excited about the new direction of the FARMER program. Koneru is the COO of Hummingbird EV, a company that manufactures electric tractors and recently introduced an electric truck that can charge the tractors in the field.

“Given the size of the farms themselves, you have to be a little bit innovative in how you charge them,” said Koneru during the FARMER meeting.

He wondered if the tender truck would qualify for grants, since it would help to replace the diesel engines for both tractors and trucks. Staff, however, worried it would be “too many moving parts” for the local air districts to track. Others asked if the category would include hydrogen fuel cell tractors, since New Holland has been developing such a model.

Koneru also shared concerns from the farmers he’s engaged with that the high initial costs for electric tractors would lead to “quite sizable” increases in insurance premiums, especially when scaling up to a fleet of 40 tractors. Another barrier stopping farmers from taking the plunge, he said, was the potential for equipment theft in the field.

State Ag board to discuss carbon markets and agtech
With climate bills, ag races to tone down and clarify language
Air board calls for bold climate action, more funding and more science on dairy digesters

Jumping into the discussion, Manuel Cunha, president of the Nisei Farmers League, immediately shot down Koneru’s proposal for a tender truck.

“Our farmers aren't going to go buy another truck and electric vehicle and have to worry about that truck and all of the other vehicles,” said Cunha, who has spent decades working with local air districts to reduce agricultural emissions.

But Cunha agreed that insurance premiums would likely rise with electric tractors and added that the additional weight of Hummingbird’s electric trucks and others for hauling agricultural products would exceed truck weight limits for roads and bridges while adding more wear on tires. Cunha also raised the issue of warranties, which has become “a very big item of discussion on all fronts.”

As Daniel Langmaid, a specialist with the Bay Area Air Quality Management District, explained, farmers could be shy about investing in an electric tractor for 10 years if the warranty only covers one or two years. He noted the technology is still evolving, which presents other issues.

“We wouldn't want to have a situation where we contract these for 10 years, and then after five years, there's a significant advancement and no one wants theirs,” said Langmaid.

Cunha explained that the greatest cost for electric vehicles is the batteries. If those batteries cannot last 10 years and require a warranty, then the technology is not ready for deployment in the agriculture sector anyway, he argued, adding that diesel tractors last as long as 60 years.

“The business sector—and the farming sector especially—can't be waiting and figuring out if it is going to make it five years or not,” he said, before raising yet another concern: With more farmers selling their land due to water scarcity and rising land values, “what happens to that electric vehicle that was funded from an air district?”

Cunha nevertheless praised the CARB team for thinking outside the box with FARMER and for recognizing the needs of small farmers, who may not have the means to purchase new equipment.

According to a CARB inventory, smaller farms tend to have older equipment than larger farms, leading to higher emissions per acre. The second category under consideration as a pilot project for FARMER would help those growers purchase used lower-emission Tier 3 equipment, replacing tractors ranked as Tier 0 or 1. The category would require a comprehensive checklist of components that dealers must inspect before the purchase, offering some assurance the farmers are getting equipment in relatively good condition.

Cunha said the opportunity to acquire a used tractor with fewer than 10,000 operating hours would lead to “a huge reduction” in emissions.