“My concern is that the USDA is using the CCC as a slush fund to circumvent congressional decisions and fund activities that have not been authorized. This is not the purpose of CCC authorities and funding,” Harris said.

He added he would be watching what Vilsack does and that it may be “time to reconsider” the CCC authority.

Why it matters: Republicans restricted Vilsack’s use of the CCC after the 2010 mid-term elections, but restored the authority to the Trump administration in time for the account to be used to compensate farmers for the impact of the trade war with China.

By the way: The Appropriations subcommittee advanced the fiscal 2023 spending bill for USDA and FDA on a voice vote Wednesday, despite GOP complaints that spending levels were too high. The bill is expected to be on the House floor in July. 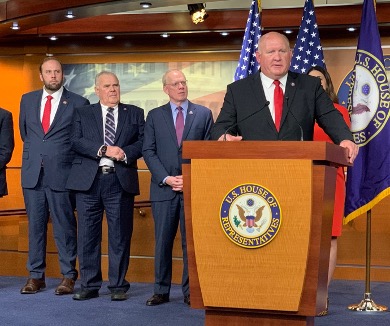 Lawmakers spar over inflation ahead of vote

House Democrats hope to show voters today that they’re trying to do something about soaring food and fuel prices. The House votes on a package of bills called the Lower Food and Fuel Costs Act that would — among other things — allow the year-round sale of E15 and promote the use of precision ag practices.

Lawmakers “have received hundreds of thousands of communications from Americans about inflation, about how it's affecting them, their families (and) their inability to accommodate their food needs or fuel needs,” Rep. Dean Phillips, D-Minn., told reporters.

At an earlier press conference Wednesday, Republicans talked up a rival bill they introduced to roll back a number of regulatory measures that they say are hurting farmers and driving up the costs of inputs and energy. The provisions address issues ranging from the administration’s rewrite of the “waters of the U.S.” rule to a climate disclosure rule pending at the Securities and Exchange Commission. 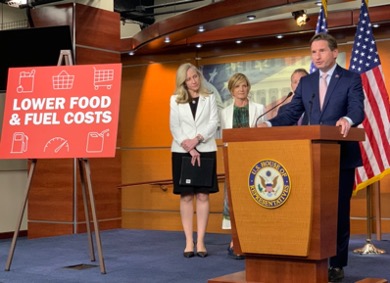 Rep. Dean Phillips, D-Minn. at the White House. “Why don't we work together on some common-sense solutions, since he's going to blame us anyways?

U.S. ag is expected to be one of the sectors that gains the most from the Ocean Shipping and Reform Act that passed by a wide margin in the House of Representatives this week, so leaders of some of the biggest ag groups will be at the White House signing ceremony today.

“This legislation empowers the Federal Maritime Commission to broadly regulate ocean shipping and ensure the timely delivery of perishable goods at all levels of the fresh produce supply chain,” the International Fresh Produce Association said after the bill cleared Congress.

NCGA to argue against duties on fertilizer imports at hearing

The U.S. International Trade Commission is holding a hearing today as part of the final phase of its investigation into fertilizer imports from Russia and Trinidad and Tobago. The National Corn Growers Association will be arguing against U.S. duties on the costly input.

Nebraska Corn Growers Association President Andy Jobman will tell the ITC that Urea Ammonium Nitrate costs had increased more than 300% year over year even before the tariffs took effect.

The Commerce Department issued separate preliminary rulings in November and then February that Russia and Trinidad and Tobago were unfairly subsidizing UAN exports as well as selling the UAN into the U.S. at below market prices.

Lots of data but too little advice on using it, panel hears

Data on U.S. farming practices is plentiful, but more resources are needed to transform it into on-farm, climate-smart recommendations for growers, witnesses told members of the House Agriculture Committee Wednesday.

“Significant quantities of relevant research already exist,” but adoption of new conservation practices has been slow, Sylvie Brouder, past president of the Agronomy Society of America, told the committee.

EPA isn’t doing enough to identify and curb harmful algal blooms in inland waters, according to a report from the Government Accountability Office. The agency “has taken limited actions to forecast inland freshwater events,” the report says.

In particular, officials from seven states told GAO that EPA needs to issue advisory thresholds for more than just the two algal bloom toxins for which it has issued guidance. EPA and the National Oceanic and Atmospheric Administration agreed with the recommendations.

He said it. “Maybe I’m a prophet, I don’t know.” - Rep. Glenn “GT” Thompson, the top Republican on the House Ag Committee, after he mistakenly referred to Rep. David Rouzer, R-N.C., as the chairman of a House Transportation and Infrastructure subcommittee.

Rouzer, like Thompson, is the ranking member, not chairman, since Democrats control the House. Rouzer quipped to Thompson, “Thank you, Mr. Chairman.”