It’s shaping up to be another very important day for the Supreme Court: In the final day of their term, the justices are set to rule in a case that could have sweeping ramifications for the federal government’s regulatory authority.

At issue in the case is the Environmental Protection Agency’s authority to regulate greenhouse gases from power plants.

The Clean Power Plan, which coal companies and 20 states are challenging, was never actually implemented. But the court could nonetheless decide that giving EPA authority to regulate “outside the fenceline” emissions would violate what’s known as the “major questions” doctrine. If so, the impact of the decision could reach beyond the ability of environmental regulators to address climate change, but other threats.

Also on tap today: USDA releases its annual survey of U.S. crop plantings. Analysts are expecting the annual acreage report, based on a survey conducted earlier this month, to show higher corn acreage and fewer soybean and wheat plantings than USDA forecast in March.

Iowa farm groups to parties: Keep us first in nation

Major Iowa farm groups are appealing to the Democratic and Republican national committees to keep Iowa’s first-in-the-nation status in the presidential nominating process.

“If Iowa’s first-in-the-nation status is taken away, we risk candidates focusing on the larger population centers of our country,” the groups say in their letter. “They might once again forget about states that are critical in providing affordable food, fuel, and fiber grown right here in the United States.”

In it, they also say, “At a time when hunger is on the rise, and food prices are at all-time highs, we need to make sure agriculture, and the people who grow our food, are not forgotten by the aspiring leaders of our nation.” 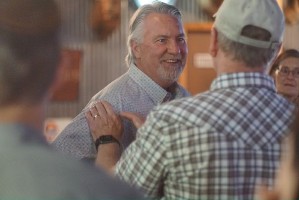 We’ve got some new clarity on races for House and Senate Ag Committee members after this week’s primaries.

In Illinois, Donald Trump-supported Mary Miller, a newcomer to the House Ag committee, easily defeated committee veteran Rodney Davis in the GOP primary. Miller says in a Facebook post that her win is “a victory for the America First movement” and “shows the strength and power of President Trump’s endorsement.”

Davis, who was first elected in 2012, notably congratulated Trump as well as Miller. Trump was in the district Saturday to campaign for Miller.

In Colorado, businessman Joe O’Dea won the GOP nomination to take on Senate Ag Committee member Michael Bennet in November. O’Dea, who says he would be a “Republican Joe Manchin,” referring to the centrist Democrat, defeated the more conservative Ron Hanks.

Democratic donors had poured money into Hanks’ race, figuring he would be much easier for Bennet to beat.

By the way: Illinois farmer and legislator Darren Bailey, who also has Trump’s backing, won the GOP nomination for governor.

The impact of rising grain prices hits hardest for the poorest

War-torn countries where hunger was already a major issue are some of the hardest hit by rising grain prices caused by the Russian invasion of Ukraine, according to a new analysis by the aid group Mercy Corps.

The cost of wheat flour in Yemen shot up 42% in the first five months of 2022, while the cost of a loaf of bread jumped 25%, and prices for cooking oil skyrocketed by 63%.

“The war in Ukraine is pushing people deeper into hunger, poverty and reliance on aid, and humanitarian organizations will be unable to address soaring needs without significant financial commitments from the international community,” says Mercy Corps.

Yara Marine Technologies, a division of the Norwegian fertilizer giant Yara International, is teaming up with the ocean carrier Berge Bulk to install massive, 50-meter-high sails on ships that are expected to reduce carbon dioxide emissions on ocean-going vessels by as much as 30%.

Yara International shipped 28.4 million metric tons of fertilizer to customers around the globe in 2021, according to the company.

“Wind has been the most evident ship propulsion for centuries,” Yara Marine CEO Thomas Koniordos said. “We are excited that industry-leading companies like Berge Bulk have the vision and commitment to equip their vessels with wind-assisted propulsion technologies.”

Check out a video of a ship raising the sails here: Berge Bulk to sail with BARTech WindWings by Yara Marine Technologies in 2023 - YouTube

USDA has now paid farmers and ranchers more than $4 billion under the new Emergency Relief Program, compensating producers for disaster losses in 2020 and 2021. Producers have until July 22 to complete applications during this first phase, during which USDA expects to pay out more than $6 billion.

What’s next: In mid-July, the Farm Service Agency will be sending pre-filled applications to about 9,000 eligible producers who had coverage under the Noninsured Crop Disaster Assistance Program (NAP).

He said it. “A farm is not a smokestack" - Rep. Ben Cline, R-Va., introducing an amendment to the FY23 House Interior-Environment spending bill to prohibit EPA from spending any money requiring livestock operators to report their emissions. The amendment failed on a voice vote.

Brought to you by Edge Dairy Farmer Cooperative