Farmers are growing frustrated that public workshops on a new pesticide proposal have devolved into aggressive shouting and personal attacks in recent weeks. The Newsom administration has been corralling stakeholders in an attempt to gather feedback for a statewide system that would alert residents of pending pesticide applications.

The Department of Pesticide Regulation sparked the contentious pesticide battle in 2020, when then-Director Val Dolcini acquiesced to calls from environmental activists in Kern County for a local notification system. After reprimanding a county agriculture commissioner over the issue, the department scaled the proposal to a statewide initiative—encompassing all applications throughout California of agricultural pesticides labeled as restricted materials. The Legislature last year agreed to spend $10 million to examine the feasibility of such an unprecedented endeavor.

DPR held focus groups and solicited ideas through public webinars before releasing the rough draft of a proposal last month and hosting three workshops to solicit feedback on the system’s design.

Under the plan, anyone could anonymously submit any address to receive alerts. DPR would issue a notification when a grower’s notice of intent (NOI) for an application falls within a square-mile block containing the address. The public would not have access to exact addresses for either the resident or the grower.

The proposal would require growers to submit an NOI at least 24 hours prior to an application, earlier than the state currently requires, triggering DPR to initiate a rulemaking process to revise the regulations. DPR Acting Chief Deputy Director Karen Morrison told stakeholders during one June workshop that this timeframe has not been finalized but could extend up to 48 hours in advance of an application.

The administration drew sharp rebuke from trade groups for placing activists alongside farmers in the same workshop sessions. It rekindled frustrations with the administration born from the cancellation of the pesticide chlorpyrifos in 2019, when DPR elevated the voices of activists among those of pesticide manufacturers, applicators and growers. The department had asked the parties to brainstorm sustainable alternatives to the organophosphate, laying the groundwork for the administration’s effort to transition agriculture away from the use of conventional pesticides. 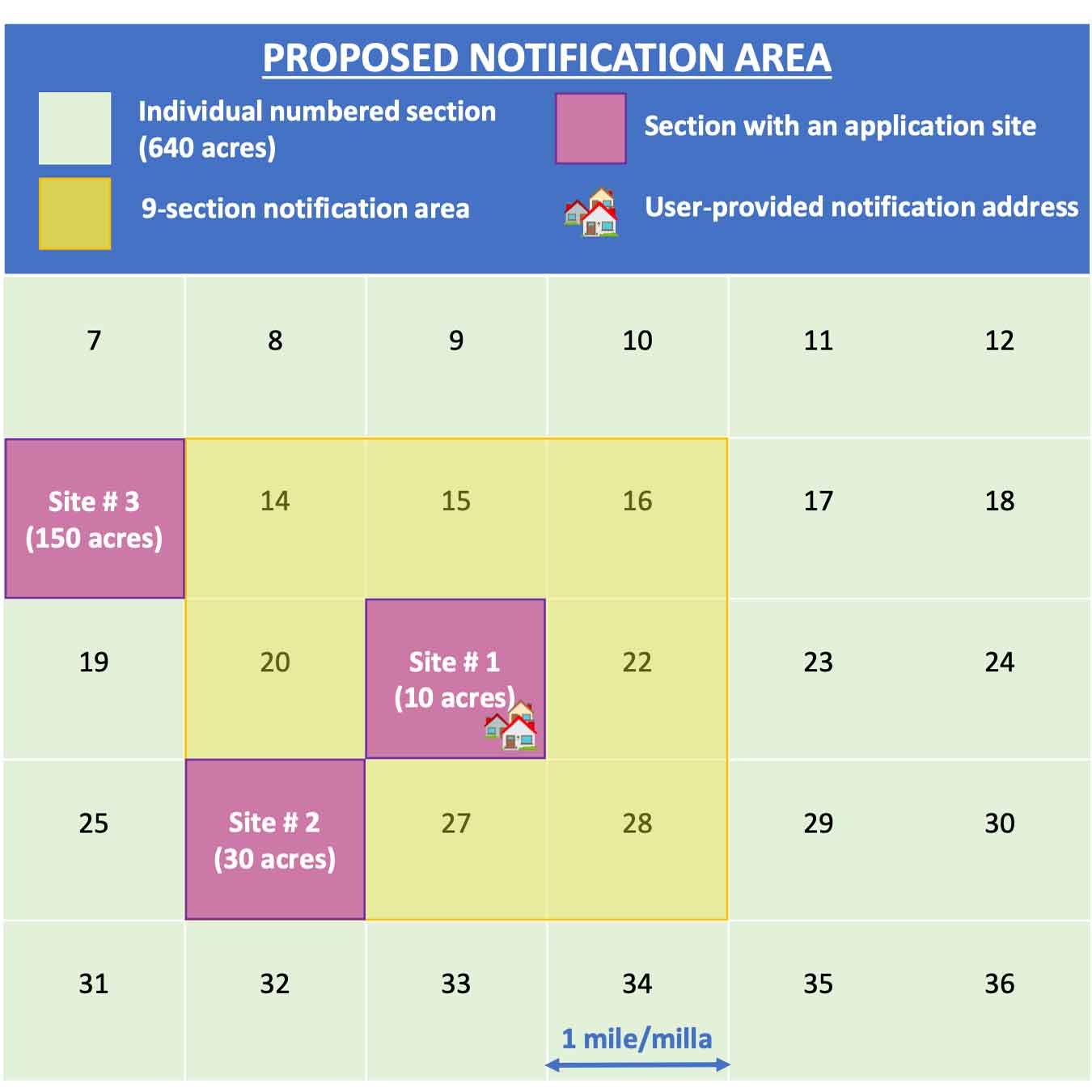 The proposed grid system would alert residents living within a square-mile block of a pesticide application. (image: DPR)

Farm groups had blasted the chlorpyrifos workshops for allowing activists to disparage growers—and leveled the same criticism on the recent workshops for pesticide notifications.

State lawmakers have taken notice as well. Julie Henderson fielded several questions on the proposal during a recent Senate confirmation hearing for her nomination as DPR director. Republican Senator Shannon Grove of Bakersfield relayed concerns from her agricultural constituents that activists were “drowning out their voices” with persistent yelling during the workshops.

Henderson replied that the system is still new and evolving and presents a significant change from the past, causing a lot of concerns and interest on multiple sides of the debate.

“Emotions are running high and it’s a very challenging issue,” said Henderson, stressing that she was actively trying to create a space with better communication between the groups.

Agricultural associations have called for the same, describing the workshops as an unsafe place for farmers and applicators to express opinions, since their comments drew personal attacks from anti-pesticide advocates. The groups are asking officials in CalEPA and DPR to develop other avenues for soliciting farmer input.

“Unfortunately, I feel like I can't recommend to my growers to engage in this process,” said Maureen McGuire, CEO of the Ventura County Farm Bureau, who described the workshop discussions as a debate on the merits of pesticides rather than about the design of a notification system. “Let's make it so that the stakeholders can participate in a way that is safe and doesn't threaten their livelihoods or their businesses.”

McGuire pushed for a more democratic process that ensures each stakeholder can contribute and feel safe. She recognized by name several of the activists in the workshops and cited a long history of conflict around the issue, adding that many of her farmers felt they were unable to participate as a result.

“There was an incident here in Ventura County at a public meeting that nearly came to blows between residents and environmental justice activists,” she said. “I personally cannot recommend that any growers in my membership go to a public meeting.”

To facilitate the workshops and survey stakeholders, DPR hired consultants at the UC Davis Center for Regional Change. The role was contracted to a private consulting firm during the chlorpyrifos workshops. McGuire hoped the center would connect directly with the farmers involved in four pilot projects that have been experimenting with early notification systems—and without DPR in the room.

Morrison shared that DPR has been engaging with agricultural interests outside of the workshops on the issue, but asserted that all stakeholders have a right to take part in the discussion.

“Part of our goal is to make sure that we are having open dialogue about concerns in a way that our entire set of stakeholders can hear some of the concerns that are being raised,” responded Morrison.

Byanka Santoyo, a community organizer for the Center on Race, Poverty & the Environment, redirected the same criticism to McGuire, arguing community members refused to participate in the sessions because they believed “farmers are just here to defend their position about how pesticides are good for them and for the economy and that we feed the world, which is not true.” A resident of Stanislaus County claimed that farmworkers have not enrolled in a pilot program in that county over fears of retribution from their employers.

Santoyo echoed Morrison’s comment that stakeholders should hear each other’s perspectives and added that this also serves as an opportunity to debunk myths. 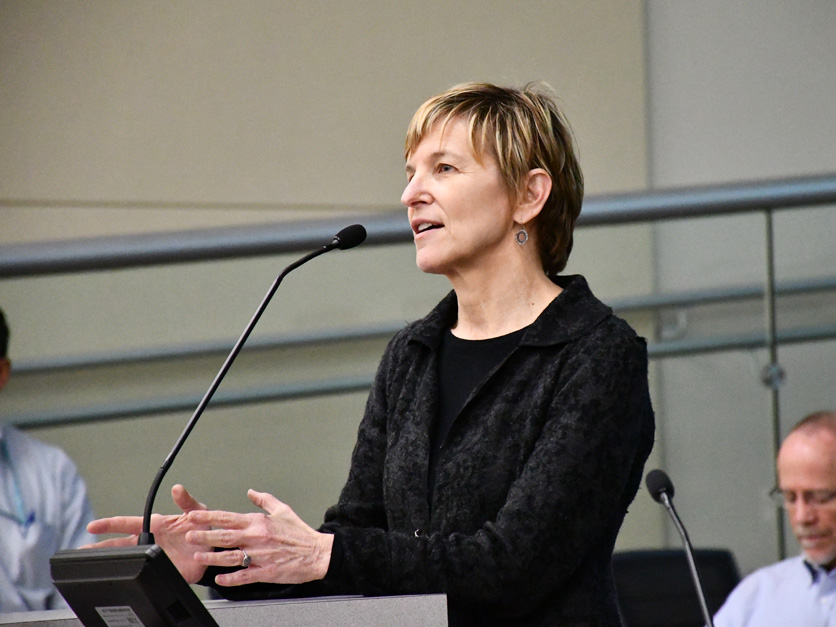 “It does not feel good for industry, which is fine,” said Santoyo. “You should feel uncomfortable in the shoes that you wear.”

Unprompted, she called for racist practices to stop.

Bernadette Austin, executive director of the Center for Regional Change, reprimanded some of the activists for blocking other commenters from speaking and for personal attacks, saying this should be a safe and respectful dialogue.

Another environmentalist took aim at Roger Isom, CEO and president of the Western Agricultural Processors Association (WAPA), and comments he had made about activists protesting a fungicide application in Monterey County. The county launched its own online notification program in 2016. According to WAPA, 60% of the people notified about the county’s fumigation applications live outside of California.

The association worried DPR’s proposal would not limit notifications strictly to residents near application sites and would create an opportunity for outside activists to attempt to halt the applications.

Morrison responded to this widely shared concern during one workshop: “We want to be really clear that the intent is not for people to go out to fields.”

Several agricultural commenters called for educating the public on the use of pesticides and for DPR to explain to them that notifications do not mean an immediate risk of exposure and that the state already has safeguards in place.

One farmer worried about having to wait 24 hours for an application when dealing with a sudden mite infestation and potential crop loss. Morrison responded that the pesticide reporting system already allows for emergency approvals and that would not change.

DPR plans to gather more feedback through public workshops in the fall, focusing on the pilot projects in Riverside, Santa Cruz, Stanislaus and Ventura counties. Next year the department will hold rulemaking hearings and workshops on the regulatory changes and hopes to launch the system in 2024 alongside a series of public outreach events.