The Legislature could soon approve a measure that would expand on California’s climate plan by adding a more aggressive carbon sequestration goal for natural and working lands. A coalition of agriculture groups are pushing back, arguing it goes too far and would undermine the state’s own regulatory process.

The legislation has gained the backing of more than 80 environmental groups, along with American Farmland Trust, the California Climate and Agriculture Network and the California Association of Resource Conservation Districts. About 15 agricultural organizations stand in opposition.

“This is an ambitious—yet achievable—target, akin to our climate goal in the energy and transportation sector [to achieve carbon neutrality by 2045],” said Garcia during a June hearing on her bill in the Senate Environmental Quality Committee. “Our natural and working lands are one of the pillars of the state's climate strategies.” 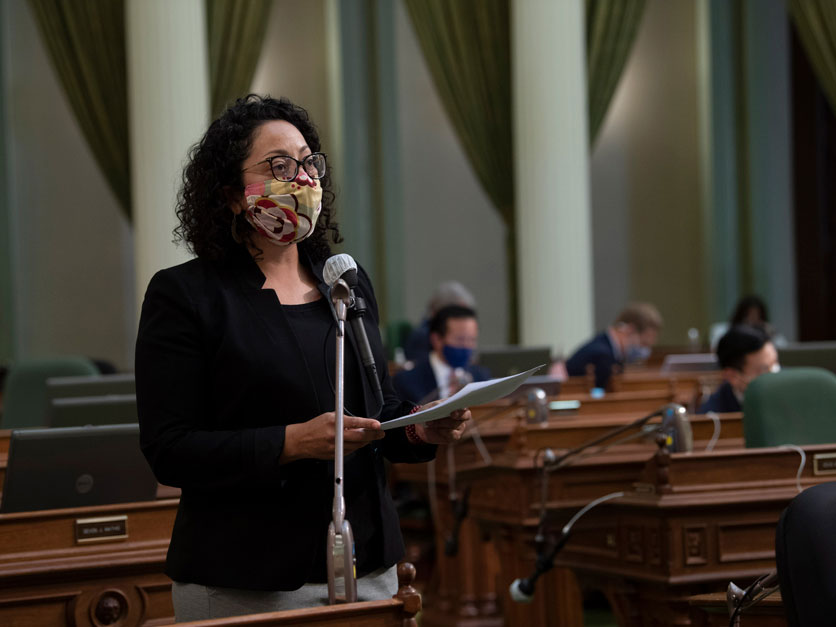 “When the microorganisms in the soil that sequester carbon are thriving, they also are much better for ag production. They produce far more yield,” said Senate Budget Chair Nancy Skinner of Berkeley, stressing that soils have been so mismanaged they no longer sequester carbon well. “So this makes sense for ag.”

The state is racing to invest in practices and technologies to capture more carbon from the atmosphere following a dire policy report in April from the United Nations Intergovernmental Panel on Climate Change. While UN Secretary-General António Guterres drew headlines for describing the findings as a code red alert for humanity, the report drew optimism for agriculture and forestry to play meaningful roles in reducing greenhouse gas emissions.

The researchers estimated that restoring and better managing forests could prevent as much as 7.4 billion tons of global emissions. Adjusting farming and livestock practices and establishing carbon sequestration efforts on agricultural lands could reduce emissions by 1.8 billion to 4.1 billion tons a year.

“The window of opportunity to secure a livable future is quickly closing,” said Vincent Wiraatmadja, the center’s government affairs manager, in testifying in support of AB 2649. “To remove that legacy climate pollution, the state must rapidly scale up proven, cost-effective practices for natural carbon sequestration.”

Wiraatmadja referenced the struggles of the Legislature and the Air Resources Board (CARB) with investing in emerging and expensive technologies to directly capture carbon emissions from the air at oil refineries and other industrial facilities. Gov. Gavin Newsom has proposed $100 million in the state budget for matching grants to support such carbon removal projects.

“We rose to the challenge of the Dust Bowl by creating the soil conservation service and civilian conservation corps and the county conservation districts,” testified Jeff Creque, who directs rangeland and agroecosystem management at the Carbon Cycle Institute, a co-sponsor on the measure. “That infrastructure still exists.”

Yet Taylor Roschen, a policy advocate for the California Farm Bureau, sought to find a compromise with the bill’s 2030 goal that would be more realistically achievable. Roschen agreed that the state and federal governments have undervalued the potential to sequester carbon on natural and working lands, even in the proposed update for California’s Climate Scoping Plan, which is under development.

“We're concerned the goals in the bill reflect the pendulum swinging too far in the opposite direction,” she said.

A committee analysis of the measure noted that mitigation estimates from The Climate Center and other organizations come with a high degree of uncertainty and vary dramatically. The health of the state’s lands is declining under the stress of climate change, creating a negative feedback loop that leads to less sequestration and more emissions from the sector.

“With more frequent and intense drought, wildfire, pest outbreaks and other impacts, it will only become more challenging to achieve climate change mitigation goals,” according to the report.

Roschen listed even more hurdles for widespread adoption of these practices, such as already high production costs, steep prices for the necessary inputs and the loss of prime agricultural land from new groundwater laws and urban development. She argued that studies supporting the most ambitious sequestration targets are based on assumptions and optimistic scenarios, while “we are not anywhere near a best-case scenario.”

“It's uncomfortable for me to be in a position to defend the Scoping Plan,” she said, adding that CARB, on the other hand, engages with stakeholders and evaluates the economic and technological feasibility for such practices as part of its regulatory process.

Setting two separate approaches to sequestration—through the Scoping Plan and the legislation—would create confusion in the sector, forcing farmers to decide which system would best account for their practices and what the potential tradeoffs would be, she argued. Another concern was whether Garcia’s plan would incentivize voluntary carbon markets.

The agriculture coalition worried this uncertainty would undermine the state’s efforts to establish a clearinghouse of shovel-ready projects and stymy private investments by muddying the market signals. Legislation passed in 2021 established a registry to catalogue projects that drive climate action in the sector and use that database to fund projects and track their benefits. Senator Bob Wieckowski sympathized with the concerns and questioned whether Garcia could include more incentives to go beyond a simple mandate. In a Senate Appropriations Committee hearing last week, Wieckowski criticized the bill for excluding market-based or alternative compliance mechanisms, arguing the text is vague on the type of agricultural practices to credit, potentially counting sheep and goat grazing to maintain forest health as mechanical work rather than a natural solution. He noted that it can take hundreds of years for some forests to grow healthy enough to substantially reduce emissions—well beyond the seven years allowed in the bill.

As a farmer, Republican Sen. Brian Dahle of Bieber shared deep frustrations that California continues to set such ambitious climate goals without first having an achievable way to reach them, making it harder for farmers to compete with those in other states.

“We have to stay in business. We have to be able to compete with other countries,” said Dahle, noting the state has already come far with its sustainability goals. “When it comes to producing food and fiber, we do it in the most safe, environmentally friendly way.”

In response, Garcia referred to California’s landmark AB 32 climate policy, which set the state’s first emissions goals, and argued policymakers must establish the course and rely on regulatory agencies to determine the best path forward.

“We have a problem now already, and our food supply is in danger,” said Garcia, reasoning that getting ahead of the climate problem will benefit agriculture in the long run. “I’m hoping that, through this work, we also get better management of our waters and our soils. That will produce not just a better quality, but a better business for you and for other folks.”

AB 2649 has advanced through several committees and awaits a critical vote in appropriations on Thursday. According to the California Department of Finance, signing the bill into law would result in significant ongoing costs to the state. The California Natural Resources Agency estimates it would pay $5 million annually for consultation services and to support new staff in setting a statewide strategy, while CARB would pay about $4 million annually.

The administration has not shared any support or opposition to the measure. Newsom, however, signed a measure into law last month to add whole orchard recycling to a state inventory of carbon sequestration projects.

The governor also directed CARB to set more ambitious actions in the Scoping Plan. He pushed for removing 20 million metric tons of carbon by 2030 and 100 million by 2045, which would include engineered carbon removal. In the draft plan, CARB proposed nine million for natural and working lands by 2030.