California has more than five million head of cattle, a small share of the 94 million nationwide. And with just 350 cows, and a couple dozen hogs and sheep, Tom Richards is struggling to compete.

“There's an enormous number of challenges,” Richards explained to the Assembly Agriculture Committee during a hearing on California’s competitiveness earlier this month. “If we want regenerative agriculture — if you want all of these things that are going to help climate change — we're the ones doing that work.”

Eight years ago his family pinned the survival of their operation on the rising value of regenerative agriculture among California’s consumers. Richards shared his story with the lawmakers as he sat at a conference table still glossy after an animal rights activist months earlier glued her hand to its surface in protest of large feeding operations.

The dated walls of the narrow hearing room, its high Victorian ceiling and the Capitol building altogether rose to construction in 1874, more than 20 years after Richards’ ancestors drove a wagon train and 300 head of cattle over snowy Carson Pass and down into the floodplains and rolling hills of Yolo County months after leaving Missouri. Decades later his great -grandfather took the helm of one of the nation’s largest wartime canneries, just a mile from the Capitol, along a street still known as Richards Boulevard and footsteps from a great railroad that for the first time connected California agriculture to the rest of the nation.

“We love this state. We were born and raised here. Our family is very deeply rooted here. And we love California agriculture — we want to see it be successful,” said Richards. “But in terms of operating a business in this state, we have found it extremely difficult.”

CDFA Secretary Karen Ross has heard the struggles of small operations countless times. And first partner Jennifer Siebel Newsom knows them as well, having visited Richards Grassfed Beef weeks earlier to hear the challenges of connecting to school meals programs. In Ross’ presentation to the committee, she pointed out that California’s 70,000 farms and ranches all started small. About 95% are family owned and their average size spans just 350 acres. 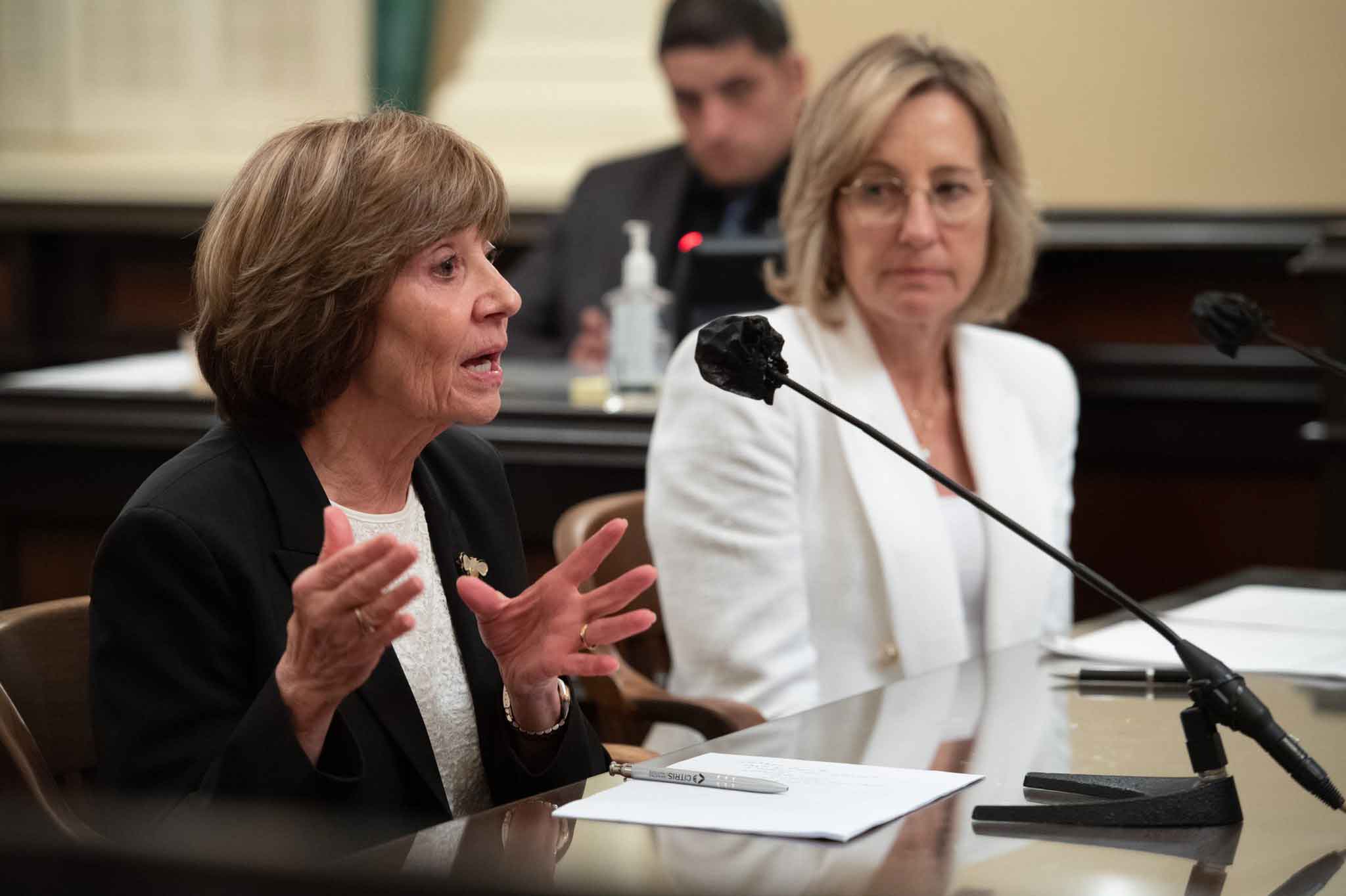 “How do we support what makes up the vast majority of California farms?” she asked. “How do we focus on the diversity of not just our crops — all 400 of them — but the farm sizes we have?”

According to Jamie Johansson, president of the California Farm Bureau, there is no silver bullet and the state must tackle one issue at a time.

California has long held a reputation as the most expensive state to run a business. Farm expenditures exceed $600,000 on average for each operation, totaling $42 billion in all —nearly as much as the state’s annual farm gate sales, according to USDA's National Agricultural Statistics Service. More than 7,000 farms permanently closed between 2016 and 2020, a sign that “more and more farms are struggling to stay afloat,” said Johansson.

Infrastructure was top of mind for Ross, as she stressed that the state must do all it can to shorten supply chains for small farmers.

That issue hits home for Richards every time his family loads up cattle for processing. One of his customers, Sacramento Natural Foods Co-Op, is just 72 miles from their ranch. But those cattle first travel 193 miles to a processing plant.

The family has access to just six in Northern California. Two are unable to scale down to their needs, while one is 600 miles south in Barstow and another nearly in Oregon. So they often drive to Nevada, where processing costs are 66% less. Even with soaring fuel prices, they save money.

The trip to the distribution center tacks on 188 miles to the journey. Most cold storage facilities contain more than 100,000 square feet of space, catering to large companies over mid-level businesses, and the Richards resort to leasing space at additional cost. They often feel like a nuisance to the larger companies in the building.

“The infrastructure is set up for the major leaguers,” said Richards. “Our first storage facility that we worked with, we had to beg them. Everybody had said no. And there was this wonderful man who let us in with two pallets.”

The final trip to the retailer is 75 miles. Yet trucking companies will not deliver to certain customers when the delivery is too small and the price exceeds the value of the product. Richards has lost customers and built frustration among others as a result. Costs aside, the trucking companies often reject deliveries for those customers stationed outside primary delivery routes.

A heat-induced drought now, an ArkStorm next: Once-theoretical disasters are sending California farmers on a climate rollercoaster
When blazes sapped firefighters, farmers took over. Now they want state help to do more

Once it reaches the co-op, the product has traveled up to 800 miles—at a cost to both the ranch and to any hope for limiting tailpipe emissions. Purchasing new cattle adds another intensive capital investment for the ranch, and it brings more costs for the expensive inputs along with a lag time running as long as 45 days to get paid for those cattle, lamented Richards.

Each step in the supply chain brings another vendor, who factors in more profit margins and expenses for labor and insurance. When Richards discovered what larger companies were paying for processing, he was furious for spending “astronomically more” on the same services.

“Your bigger players — Harris Ranch, Cargill or JBS — are all in one place,” he said. “There's one truck and it comes out ready for the grocery store.”

The added labor costs trickling down to Richards and his ranch spread to farmers throughout the state.

Each farm spends on average $180,000 on labor each year, a statistic compounded by the fact that California employs three times more agricultural workers than any other state. California now requires overtime pay on farms and the minimum wage is surpassing $15 an hour, while farmers in Mexico are working for just $8 a day, explained Johansson.

Along with high wages, California employers could shoulder most of the burden for paying off a $20 billion deficit for unemployment insurance that ballooned during the pandemic, he worried. The state budget allocates less than $4 billion to tackling the debt.

The steep cost of fruits and vegetables at the grocery store is a stubborn issue for many consumers. But UC Davis Agricultural Economist Daniel Sumner could offer no simple solution, since the state has decided to pay its workers higher wages.

“It's a really tough nut to crack,” said Sumner. “And it's one more place where innovation is needed.”

He agreed with the long list of hurdles Johansson detailed, but countered that agriculture “in fact, is strong and resilient" because it has adapted to challenges. That flexibility is demonstrated in how growers have transitioned from low-value commodities like cotton to tree nut crops, and how dairy farmers have maintained their market dominance through science and innovation despite escalating regulatory costs.

Sumner warned the lawmakers to give agriculture the space to continue to innovate and not get in the way.

“If they're allowed to,” said Sumner, “California farmers and ranchers and the rest of the supply system will actually do better at supplying the world with food, fiber and other agricultural products than most other places that we compete against.”

Richards believed agriculture could enshrine California’s values if the state creates a level playing field for smaller producers, allowing them to try new things, grow ideas into better products, and seek loftier goals. He asked the lawmakers to support that effort through low-interest loans for constructing new processing plants and storage facilities and to accelerate the permitting processes.

“I believe the state and Sacramento should be the farm-to-fork capital,” he said, recalling the motto posted to the city’s water tank in 2017, which Richards eyes on his many commutes up I-5. “In order for us to really get there, we need your help.”