Daybreak Sept. 16: Hoeven: Disaster aid will have to wait

USDA has provided lawmakers with some estimates of what producers need in disaster assistance this year. But the top Republican on the Senate Agriculture Appropriations Subcommittee says Congress is unlikely to include the funding in the continuing resolution that Congress needs to pass by Sept. 30 to avert a government shutdown.

Sen. John Hoeven, R-N.D., tells Agri-Pulse the disaster aid is more likely to be folded into an omnibus spending bill that Congress considers in its lame duck session. Hoeven wouldn’t disclose the USDA estimate: “Yes, they've given me numbers. I don't think it's likely that it's going to be in the CR.”

Securities and Exchange Commission Chairman Gary Gensler has heard the concerns expressed by agricultural groups about the agency’s proposal to require public companies to disclose their greenhouse gas emissions.

But he hasn’t quite allayed those concerns yet. At a Senate Banking Committee hearing Thursday, Gensler said, “There’s no goal to touch farmers in any of the states you represent -- or ranchers.” But Matt Herrick of the International Dairy Foods Association calls that assertion “surprising,” given that the proposal “clearly impacts the full food supply chain from farm to table.” 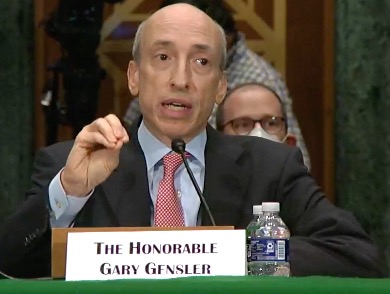 “If the SEC moves ahead with Scope 3 disclosure requirements, then they must provide adequate time for implementation and they must account for how the proposed rule allows producers to demonstrate to investors that they are making important reductions in greenhouse gas emissions,” said Herrick, an IDFA senior vice president.

The American Farm Bureau Federation said it was “encouraged” to hear Gensler’s testimony. The National Cattlemen’s Beef Association continues to call for limits in the proposal “to avoid unintentional impacts to farms and ranches.”

Going forward: The SEC will still require Scope 3 emission reporting but also will take pains to demonstrate it has heard the concerns of farm groups as it crafts a final rule. Whether that translates into substantial weakening of the proposed requirements remains to be seen.

No strike, but fertilizer may be delayed

Farm groups are applauding the Biden administration for working with labor unions to avert a strike of the nation’s major railroads. But there could be some lingering effects from the last-minute agreement announced early Thursday.

Shipments of anhydrous ammonia had been halted on Monday as a precautionary measure. The embargo was lifted Thursday, but there will likely "be some lag time as those delayed shipments move through the system and things ramp back up to full force again," said Chris Glen, a spokesman for The Fertilizer Institute.

A House GOP advocate for expanding the H-2A program for foreign farmworkers says it’s critical that lawmakers pass a bill in this Congress.

“This is our best chance politically to get it done,” Rep. Dan Newhouse, R-Wash., says in an interview with Agri-Pulse Newsmakers. With “a new Congress, we're going to bring in a whole lot of new faces in and basically have to start all over.” 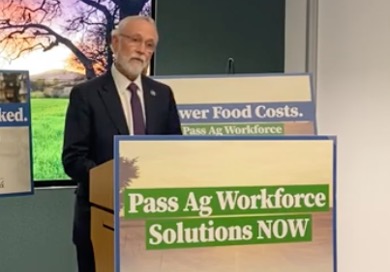 Newhouse insists negotiators are “getting close” to resolving the American Farm Bureau Federation’s concerns around the House-passed Farm Workforce Modernization Act. AFBF has long been worried about a provision that would allow H-2A workers to sue employers.

Representatives of the nation’s hog producers are warning that California’s animal housing law would lead to more of the industry consolidation that the Biden administration says it wants to stop.

National Pork Producers Council President Terry Wolters told reporters Thursday that retrofitting housing facilities will cost about $3,500 per sow to offer the kind of room required by California’s Proposition 12. That initiative, which NPPC and the American Farm Bureau Foundation are challenging in the Supreme Court, would ban the sale of pork produced from a pig birthed by a sow that had less than 24 square feet of space in its pen.

“The companies that are larger, they're going to be able to withstand the cost changes,” Wolters said. “So with that concern, you're going to drive consolidation, which is against what this administration in particular has been speaking against, right? So I'm concerned about individual independent family farmers, which is what keeps rural America alive.”

Keep in mind: Supreme Court arguments will be held Oct. 11.

Iowa Attorney General Tom Miller held meetings with Justice Department officials after he joined 11 other state AG’s in signing a letter expressing concerns about market concentration in the cattle industry and potential anticompetitive practices by beef processors, according to emails acquired by Agri-Pulse.

The Justice Department is currently engaged in an ongoing investigation into the nation’s four largest beef processors over potential price fixing. These emails — obtained by Agri-Pulse through an Iowa public records request — show DOJ consulted with Miller’s office, but don’t confirm Iowa's participation in the investigation.

By the way: David Shaw, a senior staffer in DOJ's antitrust division, also included an employee of the Montana attorney general’s office in one email. The subject line: “Beef question.”

China has been making large commitments to buy U.S. soybean since the new marketing year started Sept. 1, according to weekly reports released Thursday after the Foreign Agricultural Service resumed publishing them.

Report: Ukraine lost 16% of its grain storage to invasion

A State Department-backed organization that’s documenting the war in Ukraine says Russia has destroyed, damaged or seized about 16% of Ukraine’s crop storage facilities. That lost storage could hold about 58 million metric tons of grain.

The Conflict Observatory says the destruction of the ag storage facilities may be a war crime. The State Department is calling for an investigation.

Ukraine is still scrambling to erect temporary storage facilities, some of which were donated by the U.S.

He said it. “There are a handful of people in this room right now who really understand what we're talking about, and I've been to hours of seminars and read books.” - Sen. Tommy Tuberville, R-Ala., on the digital asset market and the need for tougher federal regulation to protect consumers.

The Senate Ag Committee held a hearing Thursday on a bill that would charge the Commodity Futures Trading Commission with regulating the market and allow it to impose user fees to fund the oversight. CFTC Chairman Rostin Behnam assured senators the bill wouldn’t allow the agency to impose fees on other markets.