Drought has spread into regions this fall essential to the Biden administration’s plans to boost wheat production through double cropping, but many farmers who follow the practice in their normal rotations haven’t strayed from their plans to sow winter wheat this fall.

Double cropping involves growing two crops one after another on the same field in the same year. It’s most commonly seen on soybean and sorghum fields in the southern Corn Belt and Southeast, where the climates allow for a longer growing season and the crops are eligible for federal crop insurance.

But farmers who double-crop still face tighter time constraints than they would growing one crop and often face reduced yields for both crops. USDA's Risk Management Agency previously only allowed farmers in 1,254 counties with growing seasons long enough to allow for some success with the practice to insure their double-cropped acres.

Earlier this year, however, RMA expanded that number of counties to more than 1,500, allowing producers in the northern Corn Belt and the western edge of the Great Plains to obtain written agreements to use the practice on their soybean acres. The agency also extended coverage to more counties in the Northeast.

These changes, which won’t take place until next year, aren’t necessarily going to spur a massive shift in the amount of acreage planted with double-cropping intentions, according to USDA Chief Economist Seth Meyer. But they do provide some producers with options that weren’t available to them before, which could lead to some additional wheat acres being planted. 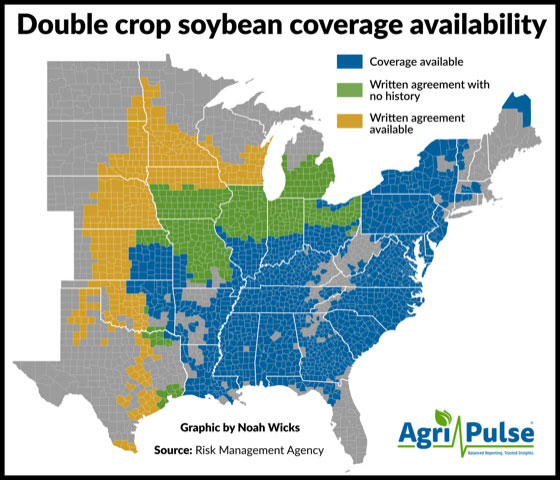 “I think the additional flexibility by the crop insurance at least throws another option out there for producers,” he said. “I don’t think it’s going to fundamentally change wheat acres, but you might get some folks who couldn’t get coverage before now say, ‘Hey, with this change in crop insurance, I might give it a try.’”

Several of the counties where the practice is insurable, particularly in Missouri, Arkansas, Oklahoma, Kansas and Nebraska, are now seeing moderate to exceptional drought conditions. Other southeastern states like Louisiana, Mississippi, Alabama, Georgia, Kentucky and Tennessee are faring better, but also seeing abnormally dry conditions.

It’s unclear exactly how many producers so far have planted winter wheat with the intention of pairing it with another crop next summer, but the National Agricultural Statistics Service estimates that 55% of the nation’s winter wheat producers had sown their acres as of Oct. 9.

Garrett Hawkins, president of the Missouri Farm Bureau, told Agri-Pulse that while the drought is a concern for winter wheat producers in his state, it hasn’t stopped many of them from planting next year’s crop.

Getting farmers to increase double cropping won't be easy for Biden administration to do
With crops destroyed, wheat growers make case for crop insurance
Winter wheat takes a hit in USDA forecast

“Drought certainly is the pervasive concern as harvest continues,” Hawkins said. “But I have been pleasantly surprised by the number of folks that are still planning to go ahead with the normal rotation and putting in and going ahead and sowing wheat.”

Dry weather actually does have some benefits for farmers in the fall. It provides the right conditions for harvesting corn and soybeans and it allows farmers to get into the fields to plant their winter wheat. But the wheat also needs moisture to germinate before the ground freezes, and USDA Meteorologist Brad Rippey doesn’t see a clear break from dry conditions in the next couple of weeks in regions currently facing drought, particularly in the Lower Plains and Midwest. 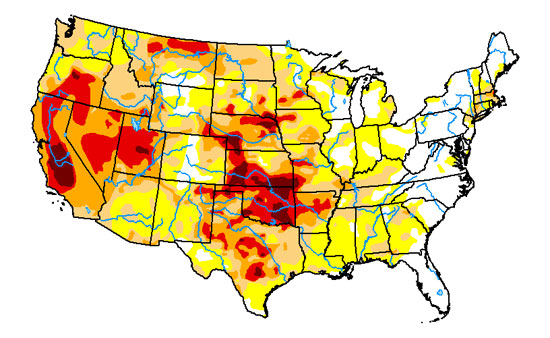 “The dry weather’s great for harvesting and planting activities,” Rippey said. “But unfortunately, with topsoil moisture so limited in many areas of the country, that quickly becomes a problem. You need to have that wheat pretty emerged and well established.”

Twenty-six percent of the winter wheat planted nationwide had emerged by Oct. 9, according to NASS estimates. Rippey did say that changes in the jet stream could bring moisture to the Pacific Northwest and Midwest in the winter or spring of next year, though he expects to see the central and southern great plains states remain relatively dry.

But Kansas producer Craig Meeker is going full speed ahead with his double-cropping plans. His rotation includes both double-cropped sorghum and soybeans, which he plants in the summer after a winter wheat crop.

“None of our wheat is going to sprout and emerge without a rainfall event of some sort,” Meeker said. “So, yeah, I have a lot of concern about where we go from here. But the Lord has always provided before and I expect that the Lord will always provide going forward.” 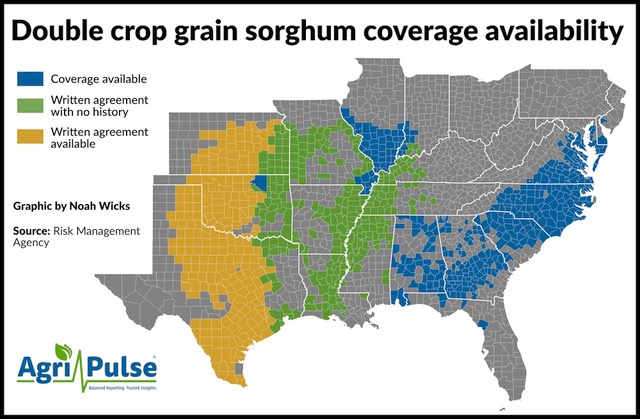 Scott Gerlt, the chief economist for the American Soybean Association, said he’s heard from some producers in Kansas and Oklahoma who are still waiting to plant until they get some rain, while others are planting and hoping to get some moisture before the soil freezes.

“I think there's very real potential in those drought-impacted areas that we do see reductions in the winter wheat area that may or may not translate into changes in soy area overall,” Gerlt said. “Farmers, if they don't plant winter wheat, can potentially still plant that ground into soy or something else in the spring.”

The crop insurance changes will begin to apply next year. So farmers who plant winter wheat now may choose to wait to determine whether they want to plant a second crop in the summer, Meyers said. He also noted that current high wheat and soybean prices may serve as an incentive for farmers to double-crop, despite the potential yield hits they could take.

“Prices remain pretty good, pretty strong,” Meyer said. “So I think there’s an incentive there that, if you have experience, and if it works for you, you may be interested.”