Agriculture has planted a new seed in the Central Valley with the nation’s first robotics and automation conference dedicated to specialty crops.

The French non-profit organization GOFAR partnered with UC Agriculture and Natural Resources (UC ANR), the Western Growers Association and the Fresno-Merced Future of Food (F3) Initiative to bring the global forum, FIRA USA, to the San Joaquin Valley this week.

They packed the agenda with panel discussions on the many challenges that growers hope automation and robotics will help to alleviate in California and other states. Lightning talks delved into the advanced imaging, data and engineering driving the latest startups and their products. The conference wraps up on Thursday with a full day of on-farm demonstrations from companies.

In its first year, FIRA has drawn more than 800 attendees, with about 40% representing startups and corporations, 20% farmers, 25% researchers and 10% students, according to UC ANR Chief Innovation Officer Gabe Youtsey.

“We want to bring together scientists and engineers, startups, corporates, farmers and farmworkers, students and product developers together to accelerate the development of ag robotics and automation solutions that are solving pressing challenges in agriculture,” said Youtsey in opening the conference on Tuesday. “But also to ensure that our farmers and farmworkers are working together with technologists and that we engage and capture the imagination of our students who are the future workforce of ag tech.”

Labor issues—both cost and availability—have long been steering agriculture toward automation. But water scarcity in the West is a growing concern as well, according to Walt Duflock, vice president of innovation at Western Growers. And with California adopting more ambitious environmental regulations each year, growers are looking to invest in precision technology to reduce inputs and maximize efficiency. 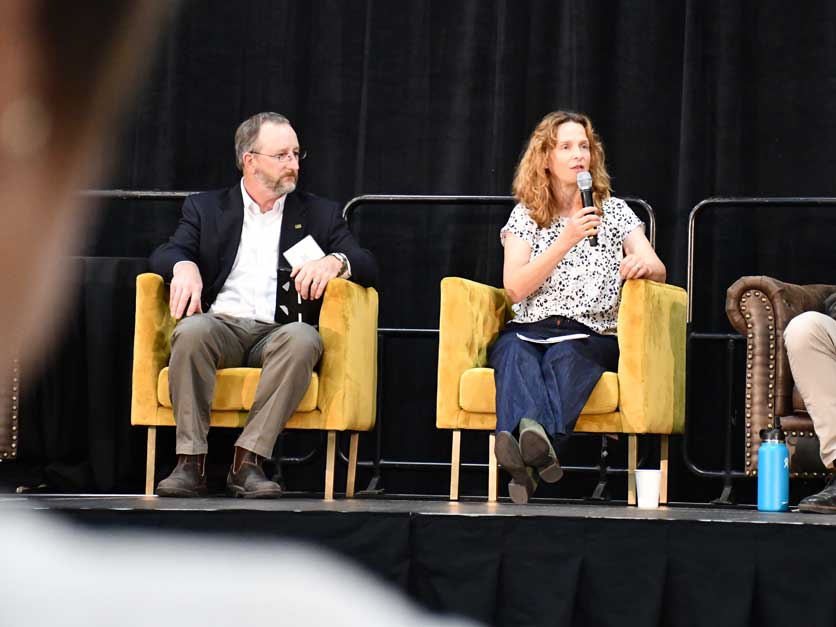 Despite the great need for innovation, ag-tech companies struggle to scale up for widespread adoption. A common concern shared in conference discussions was the trap of developing technology for one individual crop at a time—when California produces more than 400 commodities.

“One robot per crop is very unattractive for venture capital,” said Duflock. “We need to get more capital-efficient for those startups. We need more effective grower and startup interaction so we can get this stuff to market faster. What gets me up every morning is those interactions between growers and startups.”

Each speaker stressed the importance of collaboration in ag tech. The pitfalls of developing technology without broad partnerships early in the process have grown more evident than ever. In June, California’s workplace safety regulator, the standards board governing the Division of Occupational Safety and Health (Cal/OSHA), rejected a petition to allow driverless tractors on farms throughout the state. The board cited safety concerns for workers and criticized the petition organizers for not involving labor groups.

Disappointed in the decision, Edward Barnes, a senior research and development director at Cotton Inc., said the industry faced similar pushback when bringing out unmanned aerial vehicles for the first time.

“We had to make it clear that when you're using a UAV over a field, the probability that it is going to fall on somebody's head is very low,” said Barnes.

Duflock described the Cal/OSHA decision as a lost opportunity, with California falling behind in a competitive playing field with Arizona. Arizona has been welcoming business sectors, including ride-share companies, that California has aggressively targeted for workplace safety concerns, he said.

“We created a competitive dynamic where Arizona can now take the lead in autonomous,” said Duflock. “They know they're in a leadership position. They're only too happy to keep it. So there's more than just regulation in this case.”

Other speakers suggested agriculture could have collaborated earlier with the Cal/OSHA board and agency staff ahead of the petition.

On the note of uncommon collaborations, Hernan Hernandez, executive director of the California Farmworker Foundation, stressed the need to get workers involved and understand the challenges they face.

He talked to a Coachella Valley grower recently who bought a new harvester for row crops, brought it to the field and failed to get buy-in from his human resources department, which deemed it too dangerous to operate next to farmworkers. Another grower purchased a $500,000 machine and immediately dropped his workforce from 50 to just 10 employees.

Hernandez pushed for including farmworkers in the discussions to produce technology with safety in mind as well as critical insights from people who have spent decades in the field and know the terrain and the work intimately.

He and many others at the conference saw hope in the F3 Initiative for building the workforce to meet the next technology needs for California agriculture. Last month the coalition received a $65 million economic development grant with American Rescue Plan funding. The goal of the grant is to improve job quality, productivity and upward mobility for agricultural workers.

The Newsom administration has keyed in on such investments to grow emerging industries. CDFA Secretary Karen Ross, who just returned from a trip to New Zealand, said California must partner with other countries on innovative solutions to climate change.

“This seminar is a great first step in building the global cooperation that we know is necessary and brings us the greatest chance of success,” said Ross. “It's going to take that new approach in every country, working together across continents to really give the signals to the marketplace, host the integrators to see what the practical needs are on the ground and then together invest in, test out and prove out concepts for the solutions of tomorrow.”