Daybreak Nov. 2: Syngenta reaches out to dealers on FTC case

The inspections of ships hauling grain out of Odesa ports will stop today as United Nations officials scramble to try to convince Russia to resume participation in the Black Sea Grain Initiative. A UN spokesman said Tuesday the stop to inspections was planned to last just one day. But he also said it was unclear when inspections would resume.

There’s already a large queue of ships lined up to leave the Black Sea with Ukrainian grain, while other ships are heading to Odesa or loading at the ports there now. Russia suspended its participation in the initiative Saturday after it said its ships were attacked by Ukraine in the Black Sea.

“We are at the moment verily actively engaged with Russian Joint Coordination Canter members … on the issues to bring them back to full participation as soon as possible,” said UN Under Secretary General for Humanitarian Affairs Martin Griffiths.

For more on the Black Sea situation, plus a look at the impact rural areas could have on the mid-term elections, read our weekly Agri-Pulse newsletter.

Syngenta reaches out to dealers on FTC case

Crop protection giant Syngenta is reaching out to its distributors and retailer customers to defend the company’s Key AI discount program that’s now under scrutiny following the Sept. 29 lawsuit filed by the Federal Trade Commission and 10 state attorneys general.

The complaint, filed in U.S. District Court in the Middle District of North Carolina, accused Syngenta and Corteva of using “loyalty programs” with pesticide distributors to discourage generic competitors from the market.

Vern Hawkins, president of Syngenta Crop Protection, says in a letter to distributors and retailers that Syngenta needed to defend the program because the FTC is making false claims about it.

“The FTC continued to engage in a misleading media campaign to influence public opinion. Among the many misstatements made, the FTC has attempted to link rising food prices of this past year to this program – this is preposterous,” the letter says. “Optional discount programs are standard in the crop protection industry (and other industries) and have been around for many decades.”

Hawkins says the discount program will remain active and available while the challenge is resolved. He is encouraging retailers to share the letter with customers.

“We are disappointed that the FTC has chosen to disregard the pro-competitive effects these discount programs provide to you, including greater choice and lower prices,” the letter says.

That Thanksgiving turkey is likely to be smaller this year – and more expensive – due to the avian flu outbreak.

“I don’t think you’re going to have to worry about whether or not you can carve your turkey on
Thanksgiving, it’s going to be there,” Agriculture Secretary Tom Vilsack told reporters. “It may be smaller, but it’ll be there.”

According to CoBank, the retail price for whole turkey has hovered around 90 cents to a dollar a pound over the last decade. But USDA’s Oct. 21 retail price report put the price of frozen turkeys at $1.58 a pound. That is 47% more than this time last year and means a 20-pound bird would cost $31.50 this year, a $10 increase.

Highly pathogenic avian influenza ripped through turkey farms across the country this year and has caused the depopulation of more than 8 million birds. As a result, the average slaughter weight has dropped by about a pound, according to CoBank. 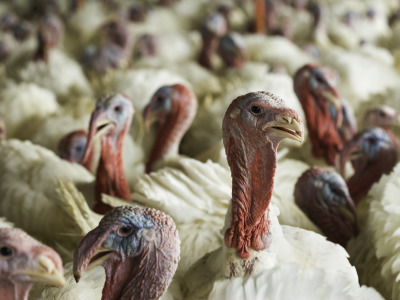 By the way: Vilsack also announced $223 million in grants and loans to expand meat processing
capacity. There’s more on that announcement in our story on Agri-Pulse.com.

Farmers remain bullish on farmland prices despite their concerns about the overall farm economy. Measures of farmers’ short-term and long-term views of farmland values both rose in October.
“Strength in both indices comes on the heels of reports from farmland auctions around the Corn Belt that land values are setting new record highs again this fall,” according to the Purdue University-CME Group’s report on farmer sentiment in October.
But it’s noteworthy that farmers now see inflation, not investor demand, as the main driver of rising land values.

Business is booming for the opium industry in Afghanistan. Farmers there harvested 233,000 hectares of poppies this year – a 32% increase from 2021 – according to a new United Nations report, but those producers are going to have to decide whether they want to risk planting a new crop after the Taliban government issued a decree in April making it illegal.

This year’s harvest was exempt from the decree, but now, opium producers are wondering how stringent the authorities will be in enforcing the production ban. It’s a difficult decision because heroin prices are soaring amid the economic crisis in Afghanistan.

Farmers don’t have long to decide because the 2023 crop has to be planted in November.

He said it. “If Russia doesn't allow this to go, they're going to be guilty of two things – starvation and malnutrition.” – Sen. Chuck Grassley, R-Iowa, on Russia’s announcement that it was pulling out of the Black Sea Grain Initiative that has assured a flow of food crops and fertilizer.