The Air Resources Board (CARB) has adopted the latest of a slew of hyperlocal environmental justice plans aiming to boost air quality by pouring millions into incentives grants. The plan is the second to cover low-income farmworker communities in Kern County and builds on earlier calls for the state to better track and report pesticide emissions to residents.

The Community Emissions Reduction Plan (CERP) focuses on a 43-square-mile radius around the towns of Arvin and Lamont, which collectively house more than 41,000 residents and sit at the base of a geographic bowl bordering foothills and some of the nation’s most productive farmland. Kern County accounts for more than $8 billion in annual farm sales, with tree nuts, milk and table grapes topping the list of commodities. But the landscape traps harmful air pollution from “large-scale agricultural practices, concentrated warehouse distribution centers, and oil and gas farm development,” according to a CARB report. The entire community is considered economically disadvantaged.

The local air district already implements the most stringent air regulations in the country, with nearly 650 rules on the books, according to staff from the San Joaquin Valley Air Pollution Control District.

“The air quality challenges faced and prioritized by this community include pesticides, heavy duty trucks, on- and off-road dust, agricultural operations, exposures at schools, and industrial sources,” explained CARB Executive Officer Steven Cliff, during a hearing last month on the $30 million CERP.

According to CARB staff, the AB 617 program overall has reduced NOx emissions by 16,000 tons and particulate matter emissions by 770 tons. Nearly all of the funding to date—more than $700 million in cap-and-trade revenues—has supported disadvantaged and low-income communities. A total of $180 million in incentives and matching funds has funneled into the San Joaquin Valley, leading to more than 8,000 tons in estimated emission reductions for the region.

In 2019 the first AB 617 plan, for the town of Shafter, came under fire from the agriculture community for lending support to calls from environmental advocates for a system to alert residents ahead of pesticide applications. It laid the groundwork for the Department of Pesticide Regulation (DPR) to set up a statewide notification system. The Arvin/Lamont CERP dovetails with that ongoing effort, as DPR holds more stakeholder workshops on Wednesday and Thursday to go over the revised proposal.

With environmental advocates leading the steering committees, the agriculture community has been largely silent in CARB hearings and CERP workshops hosted by the valley air district, which is tasked with implementing the plans. DPR’s strong support for environmentalists resulted in a tense relationship with Kern County Agriculture Commissioner Glenn Fankhauser, who has led a separate pilot project on pesticide notifications for 15 years. Fankhauser has attended dozens of workshops for the two steering committees, answering questions on enforcing pesticide laws and often defending the role of the commissioner. 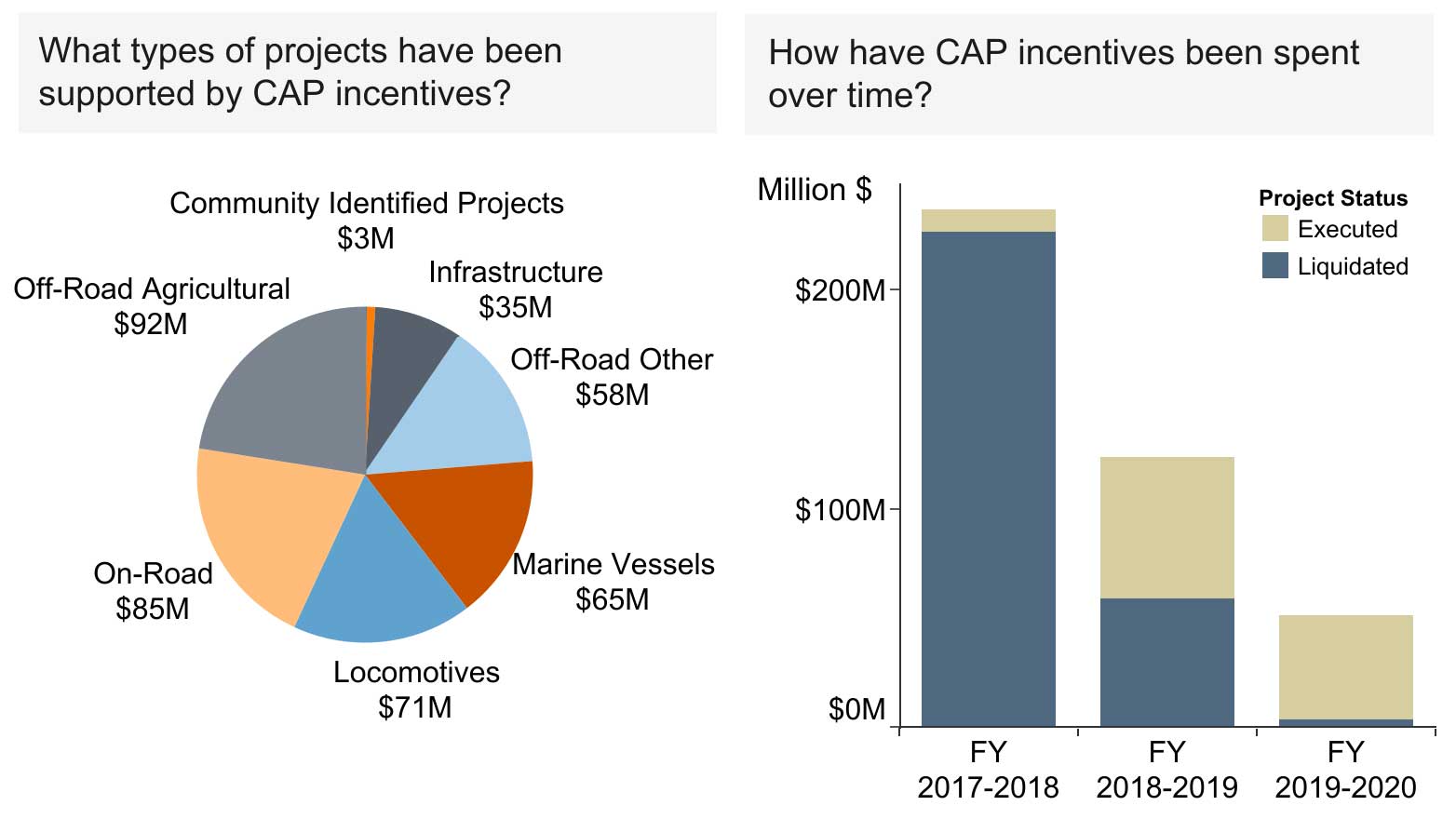 Cap-and-trade (CAP) revenues funded a range of air quality programs in the last budget cycle, including more than $150 million for AB 617. Executed projects have dedicated funding, while liquidated ones are operational. (image: CARB)

The Arvin/Lamont CERP lists more than 30 actions, including shifting highway traffic to avoid the area, building more sidewalks to reduce dust, cutting back on idling at drive-throughs, replacing gas lawnmowers and blowers with electric versions, and upgrading school buses to low-emission models. The plan also dedicates $6 million for replacing up to 30 heavy-duty diesel trucks with cleaner versions, $4.5 million for replacing up to 50 tractors or other agricultural equipment, $1.4 million for alternatives to open agricultural burning, and $500,000 for planting trees to serve as wind breaks.

Manuel Cunha, who is president of the Nisei Farmers League and has engaged on air quality issues in the valley for decades, told Agri-Pulse the most promising part of the plan is replacing almond harvesters, which leads to immediate reductions in dust pollution. The air district has been dedicating funding to that effort for nearly six years now, combining incentive dollars from California’s FARMER and Carl Moyer air quality programs and the USDA Natural Resources Conservation Service. Cunha has also found immediate gains in reducing NOx by replacing older tractors with newer models and is pushing Congress to dedicate another $15 million in the Farm Bill to turn over more tractors in the valley.

After awarding millions in grants, CARB begins to consider valley researchers
CARB passes ban on ag burning in valley
Big changes or a band-aid for the Valley’s air quality challenges?

Yet Cunha was skeptical of the vegetation buffers for cutting down the fierce valley winds blowing into the communities. The air district has had success with planting eucalyptus trees for this in Shafter. But with a severe drought and Kern County residing on a critically overdrafted aquifer, he questioned where the water would come from and speculated the trees could eventually die but at least serve a second life as a mulch blanket holding down the dust on fields, as many almond farmers have already done this year with older trees.

With the push against pesticide emissions, Cunha believed the implementation of the Sustainable Groundwater Management Act will play a key role as well. Researchers estimate up to a million acres of farmland will fall out of production as a result.

“That means no herbicides, no pesticides, nothing is going to be in those areas,” he said. “That includes down to Shafter. All along that whole west side is going to get hit hard.”

CARB also approved a set of regulatory commitments to back up the incentives in the CERP, such as increasing inspections for facilities that have had citations in the past for emission violations, some of those being biomass plants. DPR and CARB are working with other agencies and Fankhauser to increase the monitoring of pesticide use in the area and evaluate the potential health risks. This will involve installing more air monitors in the communities. 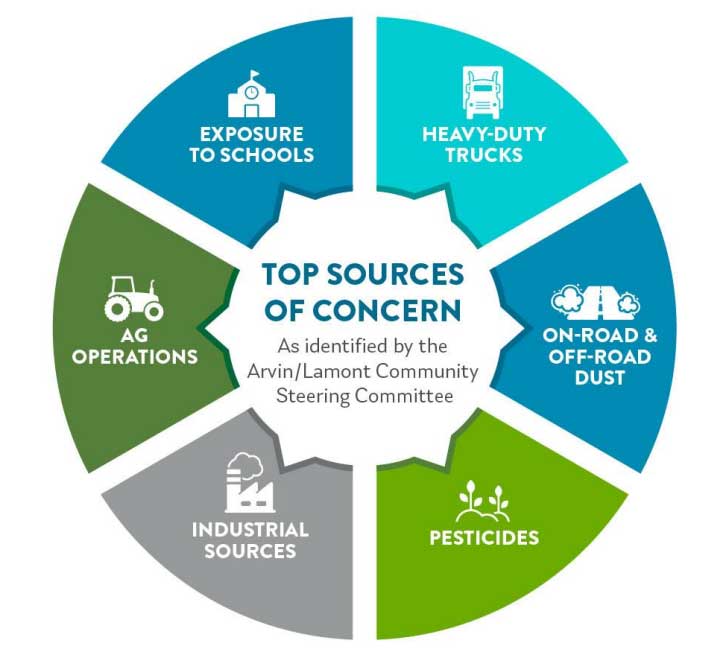 Gustavo Aguirre, who directs Kern County operations for the Central California Environmental Justice Network, explained how the advocacy group has been performing its own air sampling in the area to fill what it perceived as a gap in air monitoring by state agencies. The goal was to “really showcase that folks who live in frontline communities—and at the forefront of these emission sources—are more exposed than folks who live at greater distances,” according to Aguirre.

He collaborated with several environmental justice organizations throughout California to successfully encourage the state to impose 300-foot setbacks for oil and gas wells in Arvin. Those organizations, he said, “were happy to work in good standing with all the regulatory agencies they were once agitated with and would fight with—a healthy relationship, but an aggressive one.”

The Arvin/Lamont steering committee continues to flesh out more recommendations on notifications and buffer zones for pesticide applications, particularly around schools. Advocates called it “a huge disappointment” that the final CERP did not include prescriptive regulations on those efforts.

CARB board members nonetheless applauded the CERP and unanimously approved it.

“This, to my mind, is one of the best CERPs—if not the best—that has been presented to the board to date,” said board member John Balmes, who has studied the impacts of emissions to Central Valley communities as a UC San Francisco professor and has long advocated for CARB to take an active role in regulating pesticides. “It shows that over time we can get things right.”

Board member Hector De La Torre agreed, though he acknowledged it is still early to reap any meaningful results from the various CERPs.

“But we are seeing progress in terms of learning from one to the other, strengthening them,” he added.