San Luis Obispo (SLO) County has been restricting new groundwater wells in the Paso Robles subbasin for nearly a decade. Now county supervisors are hoping to go further by tacking on a carbon sequestration mandate for any new plantings.

The county is separately developing a revised groundwater sustainability plan (GSP) for the Salinas Valley basin—after the state rejected its initial plan and after agricultural leaders chastised the county for excluding farmers in the process.

The county is not connected to state and federal water projects, and farmers have turned to a shallow aquifer when local reservoir levels drop in dry years. Rising competition over water resources with urban development in the region spurred county leaders to enact the planting ordinance restricting new groundwater wells.

The action created a divide in agriculture between the landowners with existing wells, who capitalized on land values that soared about 17% in the subsequent years, and those without, whose property values froze in place at less than half the worth of the nearby “vested” lands.

Despite the ordinance, the region’s vineyard managers and strawberry growers have propelled the county’s agricultural economy above a billion dollars in annual revenues.

With the ordinance set to expire next year, the county is proposing an ambitious update. It would extend an annual pumping allowance for new plantings from 5 to 25 acre-feet per year, which won over about a dozen property owners but left the larger agricultural community scratching their heads over the complex policy adjustment and eventually opposing it due to the various strings attached to the water giveaway.

The board of supervisors have also been reeling from a rejection by the Department of Water Resources (DWR) in January, when the Sustainable Groundwater Management Act (SGMA) regulator ruled the county’s 1,100-page GSP was incomplete. According to DWR’s report, the GSP lacked details on the plan’s potential impacts to private wells if groundwater levels continue to drop. The county also failed to assess how groundwater depletion could hurt local rivers and creeks through subsurface connections.

In 2019 the county also drew the ire of the State Board of Food and Agriculture when drafting the plan. Farmers claimed the county made little effort to engage the agriculture community. In a letter to county supervisors, board chair Don Cameron charged that not including all stakeholders would violate one of the fundamental values of SGMA and that the GSP relied almost exclusively on groundwater pumping cutbacks.

“Every agriculturalist who has addressed the board acknowledges demand reductions must be a part of the plan, but not the sole option,” argued Cameron.

He and the board also warned the approach could harm the “extraordinary agri-culinary tourism industry the county has built.” 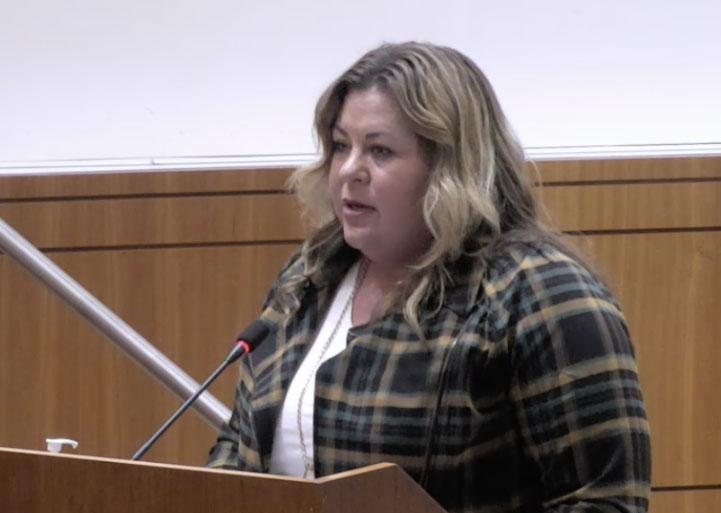 The supervisors “adamantly disagreed” with the board and defended their outreach efforts to stakeholders. An advisor to the county blamed agriculture for having “driven the bus over the cliff” by causing the groundwater overdrafting.

Supervisor Lynn Compton said this debate is simply election year politics. She surmised that farmers were not happy because “they're using the bulk of the water and they're going to be asked to cut back.”

Yet other supervisors criticized the GSP as “frankly weak” for excluding irrigated agriculture and worried the “action has led to serious dysfunction.”

After DWR denied the plan this year, NOAA’s National Marine Fisheries Service stepped in to evaluate the connection between groundwater and streamflows and found the issue to be much more complicated than the revised plan accounts for. Raising more scrutiny over the GSP, Sierra Club opposed it for not incorporating the future impacts of climate change.

Despite the contentious GSP process over the years, the SLO County Farm Bureau pushed for groundwater to be regulated entirely through SGMA, though it would accept an extension of the current iteration of the county ordinance.

“Land-use regulations like the planting ordinance are the wrong long-term approach,” argued Brent Burchett, the farm bureau’s executive director, in a letter to the SLO County Planning Commission.

The farm bureau views the GSP as a more equitable and appropriate means for achieving sustainability and praised the county for hiring a groundwater sustainability director and seizing on DWR grant funding to help implement the plan.

The proposed planting ordinance, on the other hand, would create onerous and inflexible financial burdens for small farmers, according to Burchett.

“This new ordinance creates more problems than it solves,” said SLO County Farm Bureau President Sarah Kramer, during a commission hearing last month. “The planting ordinance will fundamentally change the relationship between the county and agriculture.”

Kramer worried about being “stuck” with the provisions until they expire in 2045 and adapting to an “unprecedented” mandate on reducing greenhouse gas emissions and sequestering carbon.

“To our knowledge, this has never been done to farmers anywhere in California or the United States,” she said, with the farm bureau emphasizing that CDFA’s Healthy Soils Program and other climate-smart grant opportunities are all voluntary.

The ordinance would create a 50-foot riparian setback, which Kramer believed would take thousands of acres of prime farmland out of production. She also criticized the “burdensome” reporting requirements and questioned the need for dust suppression plans.

The Grower-Shipper Association of Santa Barbara and San Luis Obispo Counties blasted the draft proposal for the mitigation measures and for installing a new regulatory structure for the county.

The county farm bureau did find some success in convincing the board of supervisors earlier this year to drop a provision that would have required a California Environmental Quality Act review for any new irrigated agricultural plantings, which could have added months of delays and potential litigation for each planting.

“Agriculture in California is extremely heavily regulated, and it feels to me like the county is now trying to pile on more,” said Steve Sinton, a fourth-generation rancher. “We have enough to deal with without some of the problems that are going to come with this new amendment.”

He argued the proposal would restrict farmers from replanting a mature vineyard with nitrogen-fixing crops like peas to buy time for a spike in the nematode population to subside. Punishing them with two rounds of the lengthy permitting process for replanting vines later would instead incentivize growers to use more fumigants rather than replant at all, he reasoned.

“The whole thing is just complicated and a mess,” fumed Sinton.

“This is just a bad idea all the way around,” she said.

Since 2013 winegrape growers have been working with the county to address the need to balance the basin’s water table. According to Wilmore, the ordinance would undo that effort by putting the basin in greater danger of overdraft while risking the livelihood of the farmers and threatening water quality. She disputed assertions from supervisors that the draft ordinance would help small farmers, since the cost of compliance would be too prohibitive to replant. Small growers are already struggling with a costly new agricultural order the Central Coast Regional Water Quality Control Board approved last year.

“This is an ordinance that doesn't really achieve any public benefit, that overrides the environmental impacts,” said Henry. “There has been significant public opposition, notably from the agricultural community, but also environmental groups and agencies.”

Commissioner Don Campbell joined a chorus of commissioners and stakeholders in calling the proposal premature. He raised alarms for the lack of support from the county’s Agricultural Liaison Advisory Board.

“Some of these [advisors] I have known for almost a lifetime,” said Campbell. “They're the people I would really listen to when it comes to passing judgment on the situation.”

The commission rejected the proposal, and the board of supervisors is set to take up the issue on Dec. 6.