WASHINGTON, Feb. 15, 2017 - With a heap of snow in the Sierra Nevada and a winter deluge of rain, California agriculture is floating out of its five-year drought rather swimmingly.

Farmers in the Golden State have been hunkering down throughout their parched seasons, phasing out acres of thirsty, low-value field crops, adopting ever more efficient irrigation systems and adding wells to make up for lost surface water supplies. Though production of some field crops, such as hay and cotton, shrank, output of most high-valued crops either rose or remained stable through the drought (see table, page 7). Grape harvest volume rose by 5 percent, walnuts by 45 percent, and look for the final 2016 tally for milk production in the leading dairy state to equal or exceed 2011’s 41.5 billion pounds. Farmers there, in fact, markedly expanded acreage of many crops, including walnuts, almonds and pistachios, through those years.

California’s farm and ranch receipts for 2015, the latest annual estimate, ended up $4 billion more than in 2011, the year before the drought began. The increase can be attributed to shifts toward higher-valued, less-thirsty crops, and to prices rising for crops when drought shrank production. (On the other hand, the drought also drove up production costs.) 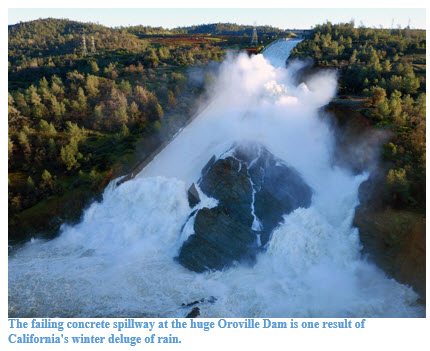 California depends on snow melt and rain to fill its reservoirs and recharge its aquifers to supply most of its fresh water during its seven normally hot and dry months. Nature delivered generously this time around. Since Oct. 1, the start of the state’s rain year, nearly all of California has gotten from 150 to 300 percent of normal rainfall, and the Sierra Nevada had accumulated more than 180 percent of usual snowpack by Feb. 10.  Most of California’s reservoirs, seriously depleted during 2016, are now filled to 70 to 96 percent of capacity and are at 110 to 170 percent of their average mid-February volume.

What’s more, at least a month of the West Coast’s typical rainy season remains, and the National Weather Service predicts at least another week of rain now in the West. 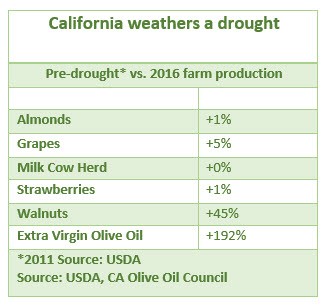 Warmer than usual ocean surface temperatures in the northeastern Pacific, “from Hawaii to Alaska,” have produced repeated drenchings of the West Coast states this winter, says Elwynn Taylor, extension climatologist and meteorologist at Iowa State University. The “northern Pacific anomaly,” as Taylor calls it, is still present in that sweep of the ocean, and will likely generate more California rainfall.

Further, “El Niño 2017 Begins,” Taylor announced on Twitter last week. He points to an El Niño, a separate Pacific Ocean surface warming phenomenon, that recently developed off the coasts of Peru and Ecuador. He says it will add further to West Coast rainfall if it strengthens and moves toward the U.S. “We’ll know in about three weeks if it is headed for the U.S.”

The long drought, however, has left California far from unscathed. In November, the U.S. Forest Service estimated the drought, together with its persistent heat and related bark beetle outbreaks, had killed 102 million trees in the state’s federal, state and private forests. Stephanie Gomes, Forest Service spokesperson, says that tally doesn’t include trees wiped out in the frequent wildfires that erupted through the drought years. Further, she says, “We haven’t looked at the damage that has happened from the rain. We are still right in the middle of it.”

After five dry months, California prepares for drought
With a grim outlook for salmon, California looks to upend the status quo in water policy

Meanwhile, there was little recharge to aquifers, especially in the state’s central and southern regions, even as landowners dug new wells and deepened others to make up for the shortage of surface water. So, California is left with a huge groundwater debt.

“It’s a very wet year almost everywhere” in California, says Jay Lund, director of the Center for Watershed Sciences at the University of California, Davis. “In the northern part of the state, I think we’re back pretty close to where we were” before the drought in groundwater supplies.

The San Joaquin Valley is in the worst shape because they draw more water, and they have higher demands for agriculture down there, Lund says.

“For close to a hundred years now, they’ve been drawing on that groundwater. The aquifers will take years or decades to recover, given the San Joaquin Valley’s dry climate. Some aquifers may never recover to pre-drought levels.”

Lund hopes that the California Legislature’s broad directive for local water control jurisdictions to form “groundwater sustainability agencies” will proceed. “They are just getting organized,” he said. “It is really important that this happens. The groundwater is really what got the high-valued crops in California through the drought. The idea is we need to sustain that groundwater, not over-pump it so much.”

Besides the new groundwater planning law, funding has been ramped up on several fronts to improve water supplies, conservation and water quality: