The Senate Agriculture Committee is moving quickly to advance a carbon market bill that would deliver a rare bipartisan win on climate legislation even as President Joe Biden is trying to convince world leaders that the U.S. is serious about slashing greenhouse gas emissions.

The Senate panel is scheduled to vote Thursday on the newly revamped Growing Climate Solutions Act, which would lay the groundwork for ag carbon markets by putting USDA in charge of creating a program to certify credit verification services and technical assistance providers.

Thursday is the same day Biden is set to convene an online summit of global leaders on climate policy. Biden is expected to use the summit to release a new U.S. pledge for reducing greenhouse gas emissions by 2030; he will reportedly commit the U.S. to slashing U.S. emissions in half in comparison to 2005 levels.

The new version of the Growing Climate Solutions Act, or GCSA, has at least 35 Senate cosponsors, including 16 of the 22 Ag Committee members.

The bill includes a new section aimed at protecting farmer rights and additional provisions intended to ensure the needs of beginning and minority farmers are considered. The makeup of a USDA advisory committee, which would have extensive authority to shape certification requirements and responsibility for continually reviewing the program, also has been overhauled to ensure that a majority of members are farmers, ranchers and private forest owners. Under the original bill, the committee would have had at least 25 members, 10 of whom would have been from agriculture.

For now, the bill is being considered separately from Biden’s $2.7 infrastructure package, the American Jobs Plan, which faces strong opposition from Republicans both because of its size and because it is funded through corporate tax increases.

The path forward beyond Thursday’s committee vote for the GCSA isn’t clear, especially since it isn’t certain yet how Democratic leaders intend to handle the infrastructure package, which is the main legislative vehicle for his climate policy.

"I'm confident we will get floor action,” Senate Agriculture Chairwoman Debbie Stabenow, D-Mich., told reporters on Tuesday when asked about prospects for the bill. “I'm not sure exactly how that's going to happen, we will obviously want to move it sooner rather than later.”

She said that Senate Majority Leader Charles Schumer was “very, very supportive” of moving the bill.

Stabenow confirmed that she is separately working to ramp up conservation funding in the infrastructure plan. Biden’s proposal included relatively little funding for conservation beyond $1 billion proposed for “agricultural resources management” and a separate proposal to spend an unspecified amount on drought resilience.

“There's more work to do to get additional dollars” for “conservation programs that are widely used and supported” by farmers and foresters, she said.

Indiana GOP Sen. Mike Braun, who co-authored the bill's original version, told reporters that moving the new GCSA should open the door to other bipartisan climate bills. "There are bills that are going to come into play once this cracks the threshold," he said.

The GCSA faces strong opposition from some on the left, and plenty of skepticism among some conservatives, including members of the House Agriculture Committee.

The House committee’s top Republican, Glenn “GT” Thompson last week called the GCSA “a complex solution in search of a problem,” and he questioned whether a lack of technical assistance was a barrier to carbon markets.

Numerous progressive groups, including environmental groups such as Friends of the Earth, sent a letter to lawmakers last week, urging them to oppose the GCSA. By facilitating ag carbon markets, the bill would “allow greenhouse gas emissions to continue unchecked and would undermine efforts to build a healthy, sustainable, and resilient food system,” the letter said.

However, the bill has support from some environmental groups, including the Environmental Defense Fund and National Wildlife Federation, and the measure's co-sponsors include one of the Senate's most vocal advocates of acting on climate change, Sen. Sheldon Whitehouse, D-R.I.

"It's said that if you can build a good brick, you can build a city. And the brick that this legislation builds is enormously valuable and powerful," Whitehouse told reporters.

The new version of the bill reflects negotiations between Stabenow and the committee's top Republican, John Boozman of Arkansas.

Among the changes that were made was a requirement that USDA and Environmental Protection Agency conduct an assessment of carbon markets before USDA decides to go forward with the certification program. 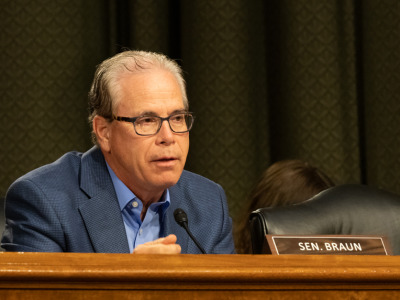 A new section of the bill, titled “Fair Treatment for Farmers,” would require USDA to ensure technical assistance providers and credit verifiers provide farmers with realistic cost and revenue estimates. The USDA-approved technical assistance providers also would be charged with helping farmers, ranchers and foresters to “receive fair distribution" of the revenue derived from the sale of carbon credits.

The bill authorizes up to $9.1 million in funding for USDA to operate the program. That includes $4.1 million that would be immediately available out of the $1.9 trillion economic stimulus plan enacted in March, plus $1 million a year in additional funding for five years.

NFU President Rob Larew said the bill would address the lack of existing oversight for the “patchwork of carbon markets" that have developed. There also is no uniformity among the markets for “criteria, payment rates, or measurement, which can make selecting the right one a confusing and overwhelming process.”