Farm robotics: Lots of progress but far from the finish line

WASHINGTON, Feb. 22, 2017 - In a display of both pop music talent and robotics advancement, Lady GaGa opened her flashy Super Bowl half-time show last month singing God Bless America while a computer choreographed 300 drones with red, white and blue LED lights in the sky to form a U.S. flag. On U.S. farms, transformative robotic innovations are usually much less dazzling, playing their part quietly in the countryside. That may change.

Across service sectors worldwide, including agriculture, robotics growth is on a tear. The ROBO GlobalTM Robotics and Automation Index, which includes 80 stocks in the international robotics and automation arena, has shot up more than 40 percent in the past year. Meanwhile, the 2016 International Federation of Robotics (IFR) says overall sales of robotic products jumped 15 percent last year, the biggest-ever yearly increase. The IFR reports that China, the Republic of Korea, Japan, the United States and Germany bought 75 percent of robots globally in 2015. China led with 27 percent of purchases. 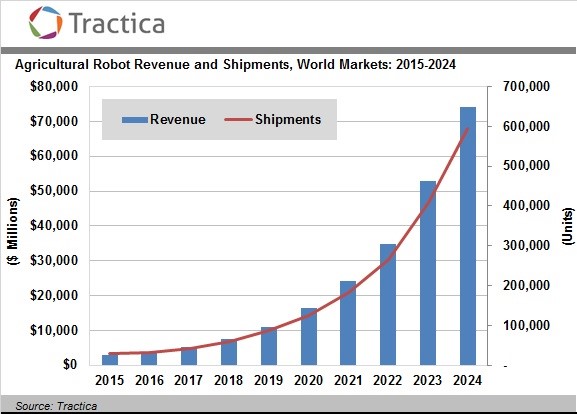 Measured by value, IFR reports, global robotic sales rose 9 percent last year, to $11.1 billion, but to a market value of about $35 billion if one includes the cost of software, peripherals and systems engineering.

Explosive growth, meanwhile, is on the way for agriculture’s modest slice of the high-tech automation pie, experts say. A new report on the agricultural market by Tractica says world ag robot shipments, a modest 32,000 in 2016, will soar to 594,000 by 2024, reaching gross revenues of $74 billion. “The rising demand for agricultural robots is being driven by . . . global population growth, increasing strain on the food supply; declining availability of farm workers; the challenges, costs, and complexities of farm labor; changing farmlands; climate change; the growth of indoor farming; and the broader automation of agriculture,” said Tractica research analyst Manoj Sahi.

In its 2020 Multi-Annual Roadmap for Robotics in Europe, SPARC, a public-private partnership of the European Commission and European industry and academia to develop and implement robotics, says most agricultural robot development has been in Europe, the U.S., and Japan. Europeans have led in the livestock sector, with robots that milk cows, feed animals and clean barn floors. American and Japanese advancements, meanwhile, have been mostly in high-value crops. 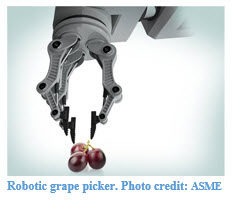 U.S. robotic innovators, based in California’s Silicon Valley and elsewhere, have focused on devices for planting, monitoring, cultivating, weeding and harvesting field and orchard crops. Trimble, for example, has more than 1,100 patents and has a spectrum of positioning applications for agriculture, engineering, construction, transportation and wireless communications infrastructure. Meanwhile, U.S. startup companies have marketed devices such as a long-armed apple-picking robot, while the National Academies of Science recently awarded Harvest CROO Robotics a $225,000 grant to further develop its strawberry harvesting robot, a machine that selects and harvests ripe strawberries from each plant in eight seconds, leaving green ones and the rest of the plant intact.

Autonomous farm machinery? Not for a while, says Kraig Schulz, president of Minnesota-based Autonomous Tractor Company. “Every tractor company out there is trying to do it.” Schulz notes that “auto-steer” technology has been around for 20 years. “You can take the cab off (the tractor) and call it autonomous, but there is nothing really new in the technology.”

“The big issue is that an autonomous tractor itself actually doesn’t do much for you,” Schulz says. “The tractor provides power and mobility to an implement.” Thus, you can’t have an autonomous field operation “until you get an implement as smart as or smarter than your tractor.” His company is now manufacturing, and selling to dealerships, its first retro kits to repower self-propelled John Deere sprayers with diesel-electric drive trains and with programming to spray crops as directed by its software, but giving the farmer ability to monitor and revise the sprayer’s work remotely. “We call it semi-autonomy. It is working on its own, but it’s under your supervision. You are not going to just leave the thing on its own to do the work,” he says.

To reach autonomy on the farm, Schulz says, “You have to replicate everything the driver used to do. That is hard to automate. Very hard.” That means, he says, “To have a farmer leave the field and go do something else – that isn’t something that is going to happen anytime soon.”

So, Schulz says, semi-autonomous farm implements are rare, yet for progress in that direction he points to a successful lettuce thinning machine developed and built by Blue River Technology of Sunnyvale, Calif. Its LettuceBot employs a “see-and-spray” system with its computer vision for recognition of all plants. The thinner sprays nitrogen precisely on unneeded small lettuce plants, leaving large ones appropriately spaced. The machine replaces a highly labor-intensive task long done in the hot California sun.

This summer, says BBT Vice President Ben Chostner, the company will field test the prototype of the firm’s next see-and-spray machine, which seeks out and selectively sprays Palmer amaranth (pigweed) in cotton fields, and a few will be sold to farmers next year. 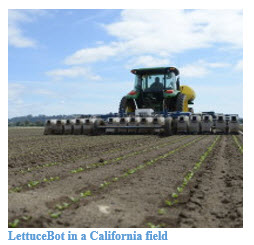 In another farm robotics arena, meanwhile, the idea of substituting a drone for expensive crop surveillance by airplanes or satellites has enticed both farmers and robotics startups, says Frank Tobe, who publishes The Robot Report. “Certainly, there has been a flurry of drone start-ups offering flyovers with various sensors,” he says. The most effective have been the thermal imaging and crop evaluation sensing, which do a good job, he says. But drones have proven themselves limited by battery life, the weight of cameras and sensors that a farm manager wants to use, and inadequate software. A lot of trial and error remains, he expects.

Meanwhile, some companies have started to specialize in custom crop monitoring: contracting with farmers, for example, for specific images, weekly and at a price per acre.

Tobe expects a new, even cheaper generation of crop surveillance technologies will soon arise, wherein the farmer plants stakes, bearing the sensors he wants, at intervals across his field. The sensors, costing a few dollars each, will feed desired data to an office computer.

“It’s the economic metrics, the money, the return on investment, that is the key driver” of farming robotics, says Tobe, who has tracked the advance of automation and robotics closely for a decade. American dairy farms have had older-style carousel parlors for decades, for example, he says, “but the carousels we have today are outdated,” still requiring a team of workers to herd cows, cleanse udders, attach machines and perform other chores. “Now, dairy farmers are saying, ‘Hell, the metrics are changing daily. We might as well make this investment in robotics’ – a carousel system.” 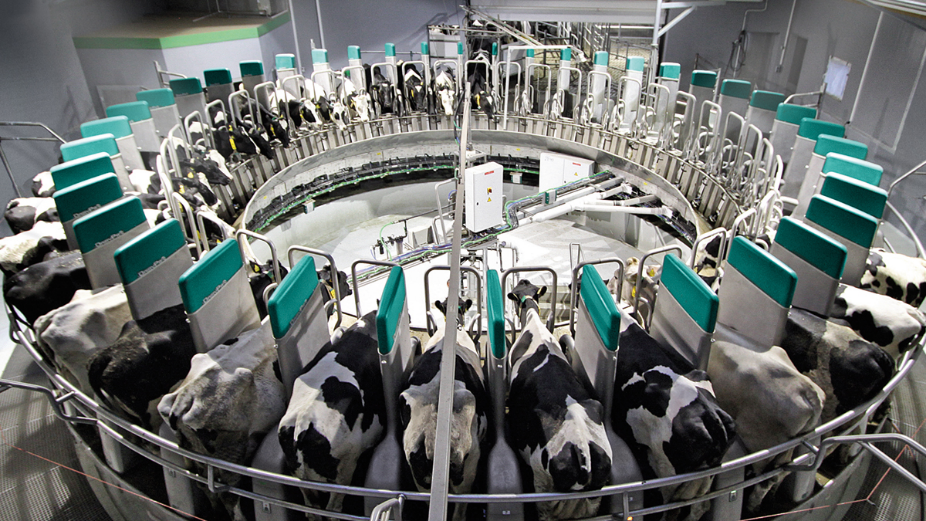 That’s the case with Tom Barcellos, a diversified farmer who is making a huge investment in robotics to milk his expanding herd of 1,700 Holstein milk cows. He is building two new barns for his milk cows and will bring all of his heifers from other sites to his farmstead, thus saving on transportation, labor, and feed handling costs. Cows will all be milked at one new automated rotary parlor at which 50 cows are milked at once -- a total of 225 within one hour. He has studied automated parlors for years as the robotic tricks and speed improved to where one rotary platform, DairyProQ (see photo), by Gea of Germany, “makes all the sense in the world.” In brief: “The cows come in, they step on a platform, and by the time it makes a full circle, they’re primed, they’re milked and they’re post-dipped, they’re backing off from it; they’re done.” The tab for the new parlor: $3.25 million ($65,000 per cow stall). 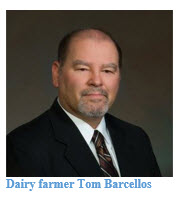 Of the milking machines now in traditional milking barns, he says, “it is hand work for everything: for cleaning, for priming, for attaching . . . and post-dipping.” But the carousel “eliminates 50 percent of the labor in my scenario,” he says. “It’s hard to get labor,” he declares, “and with labor costs going up, you’ve just got to move forward. The way to move forward today is robotics.”

Kevin Abernathy, general manager of the Milk Producers Council and former milk machine salesman, agrees with Barcellos’ assessment and says dairy farming economics in California spell demand for the fully robotic carousels. While four workers are needed in a traditional parlor with 40 cows, he says, one or two workers can run the new carousels, built to handle 50 to 80 cows at once.

Those labor demand factors in dairy barns are playing out as the supply of farmworkers shrinks amid increasing government action against undocumented workers and rising wages for those still willing and available for farm work. U.S. average farmworker pay reached $13.25 an hour in October, up $2 in five years. Note, too, that in Creighton University’s Mid-America Report for January, 30 percent of business supply managers surveyed in nine Midwest and Plains states reported finding and hiring qualified workers was their biggest obstacle.

What’s more, states are also starting to include farmworkers, long excluded, in their mandated state minimum wage. In California, that base pay will climb in steps to $15 in 2022. Also, starting in 2019 the state will start reducing the threshold of hours per week that require overtime pay for farmworkers. The threshold will fall to 40 hours by 2022 (by 2025 on small farms.)