The no-GMOs campaign took the field long ago. Natural foods grocers, for example, joined to form the Non GMO Project a decade ago and began using no-GMOs labels, and grocery shelves have since become flooded with “no GMOs” and “GMO-free” labels on most any kind of food and beverage products - including many which are not derived from any GMO ingredients.

Now the Department of Agriculture is trudging toward mandated labeling, though it’s already been two years since Congress mandated that labels on GMO-containing products in food stores inform consumers about the presence of GMOs.

The day before July 4th, USDA closed off public comment on the regulations it proposed in May and will probably start writing its mandate, expected to include exemptions for restaurant food, products from small producers and other waivers.

What’s more, two and a half years have slid by since some U.S. food makers saw GMO disclosure as both inevitable – plus the smart thing to do – and raised white flags to anti-GMO advocacy and began voluntarily adding GMO information on their labels.

On Jan. 7, 2016, Campbell Soup Company became the first big food maker to do so. It called for mandated GMO labeling nationally and announced it was “prepared to label all of its U.S. products for the presence of ingredients that were derived from GMOs.” Gracing the announcement was a photo of a can of Campbell’s Spaghettios with the declaration: “Partially produced with genetic engineering . . .”

Kelly Johnston, Campbell Soup Company’s vice president of government affairs, told Agri-Pulse at its Ag & Food Policy Summit this spring that the move was no mistake: “In fact, I think it was one of the best things we’ve done in my 16 years with Campbell.” He pointed out that, at the time, Congress appeared unable to act on the GMOs labeling question, while Vermont, the first state to mandate such labeling, was preparing to enforce its new law, and “we had been through four very bruising state ballot initiatives” that proposed mandatory GMOs labels.

Worse, he said, because major food makers were fighting the declaration of GMOs on the label, consumers “were telling us we’ve got something to hide and maybe something wrong with the ingredients or products. So I said, ‘let’s embrace this.’”

Campbell and some other food makers now declaring GMOs on their products include in that category all processed ingredients, such as vegetable oils and sugar, that likely contain no GMOs though they are derived from genetically modified crops.

Thomas Hushen, Campbell’s associate communications director, says his company “is committed to open, transparent and timely communications about the ingredients we use, why we use them and where they come from.” That includes products from gene-edited crops, which USDA proposes to exclude from the mandate. Instead, he says, “we believe that consumers have the right to know . . . doing what is best for consumers is best for our business.” 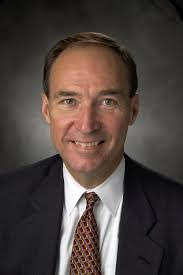 In fact, a recently released study by University of Vermont and Purdue University researchers found that opposition to GMO food in Vermont fell 19 percent after that state began requiring GMO declarations on labels two years ago.

Scott Faber, executive director of Just Label It, which advocates for mandated GMO labels, says that finding is no surprise, and he believes food companies will not suffer overall by clear and full disclosure of GMOs. In the Vermont case, “consumers are rewarding those companies for playing it straight with them,” he said.

Faber notes that companies such as Campbell, Mars and General Mills have continued to fully report all manner of GMOs in their products, “to their credit,” even though the 2016 law and USDA’s follow-up proposal present many alternatives to what he views as clear and full disclosure.

A look at some of the 8,600 comments on the USDA proposal shows a mountain of objections to the replacement of GMOs with “bioengineered” (the term Congress used in its 2016 law) as the central defining term. 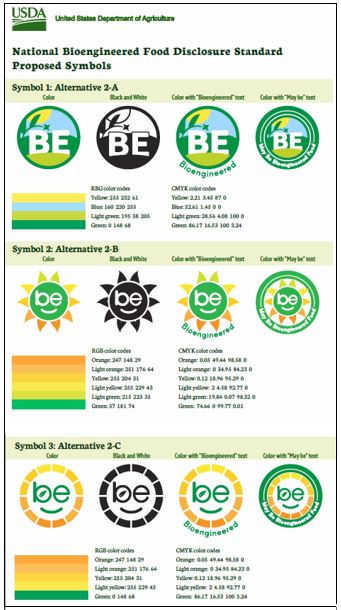 Faber’s organization says 64 countries require GMO labeling, and with U.S. companies having to label their products in the U.S. and around the world, USDA “needs to allow companies to use words that consumers are familiar with – not weasel words like bioengineered.”

Other comments focused on USDA’s proposed smiley faced BE icons, along with a possible alternative allowing for a label that is just a QR code, which would require an app on a smart phone to read. (See graphic with proposed symbols.)

U.S. food companies, including the Grocery Manufacturers Association, have already offered their own digital SmartLabel the past three years as a way to offer consumers full transparency about what is in their products.

However, like countless folks who weighed in on the proposed regulation, “not everyone has a smart phone or access to a computer,” said organic farmer Tom Denison of Corvallis, Ore., in his comments to USDA. Also, instead of a BE symbol, he said, “the proposed rules should clearly display GMO on a label that can be easily read by consumers in the store. Any plan that requires a smart phone, or contacting a source outside the store to learn whether GMO's are an ingredient, is unacceptable,” he said.

Food companies using GMOs in their products are quick to point out that the Food and Drug Administration has found no health risks in any GMO product to date. Campbell’s Johnston says that such an assurance ought to be approved as part of the GMOs label declaration, but “we’ve not been able to add to the label yet.”