WASHINGTON, Feb. 22, 2017 - Iowa farmers challenging construction of the Dakota Access crude oil pipeline on their land will appeal to the Supreme Court after a Polk County district judge upheld the Iowa Utilities Board’s approval of the decision.

“We’re not giving up,” said Dick Lamb, one of 14 landowners in the case. “We don’t want this pipeline, and I think most Iowans don’t want it either.” The landowners have 30 days from District Court Judge Jeffrey Farrell’s Feb. 15 decision to file their appeal. 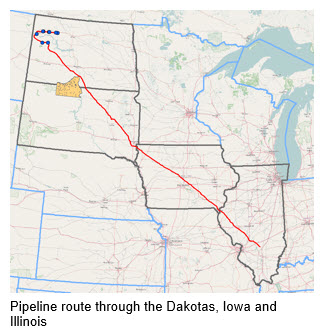 “We are disappointed,” said attorney Bill Hanigan of the Davis Brown law firm in Iowa, “but we’re not deterred. A private, out-of-state company, which doesn’t serve Iowans, should not be able to use eminent domain to seize Iowa farmland for the purpose of exporting crude oil.”

The pipeline, which will run from North Dakota to Patoka, Illinois, is substantially complete in the state. The landowners were asking the court to order the company to remove the pipeline from their properties.

But Judge Farrell concluded that the Iowa Utilities Board fairly interpreted Iowa law when it found that the pipeline serves a “public use” and rejected the landowners’ argument that state law required the board to prepare an environmental impact study.

The farmers had argued that state law limits condemnation of farmland without the landowner’s consent.

Farrell, however, said the legislature “clearly gave the board authority to grant rights of eminent domain to pipeline companies,” even after it amended state eminent domain law in the wake of a controversial U.S. Supreme Court ruling in 2006. That 5-4 decision, known as Kelo, found the city of New London, Connecticut’s taking of private property for redevelopment qualified as a “public use.”

The landowners had also argued that Dakota Access must show that the pipeline would actually provide a public service to the people of Iowa. The pipeline “does not ship oil from Iowa, nor does it ship oil into Iowa,” Farrell noted.

However, he noted that “there was unquestionably substantial evidence to support the finding that the project would provide economic benefit to the state.”

“While the board must consider the public interest of Iowans as part of its balancing test, there is no indication in the statute that the board cannot approve the permit unless product is shipped to or from the state,” Farrell found.

The utilities board “found that construction of the pipeline would economically benefit the state by various means,” including from construction, where benefits were estimated to be between $787 million and $1.1 billion.

In addition, the board “determined the project would employ 3,100 to 4,000 workers,” Farrell said in his ruling.  “The board found the economic benefits to the state to be significant,” the judge said. “The pipeline was expected to result in approximately 25 long-term jobs by direct and indirect means. The board also found that Dakota would pay approximately $27 million in property taxes each year.”

Farrell also said the board had carefully considered environmental concerns.

“Any pipeline carrying crude oil carries risks, but the legislature has made a policy decision to allow such pipelines if approved by the board,” Farrell said. “The board carefully analyzed the safety issues . . . and considered the various risks incurred by the proposed project. Dakota voluntarily agreed to safety measures not otherwise required by law” and the board imposed others.

The pipeline has received national attention because of protests by the Standing Rock Sioux Tribe and others over proposed construction – recently approved by the Army Corps of Engineers – under the Missouri River near the tribe’s reservation in North Dakota.