WASHINGTON, Mar. 2, 2017 - U.S. crude oil production increased for the second consecutive month in November 2016, the first time this has occurred since early 2015, according to data from the Energy Information Administration (EIA).

Increased drilling activity in the Permian region, which spans Texas and New Mexico, as well as the start of a number of new projects approved during the 2012-2014 period in the Federal Offshore Gulf of Mexico (GOM), more than offset declining production from other regions in October and November 2016, EIA says.

The data show that increased drilling in the Permian region responded “relatively quickly” to a rise in the West Texas Intermediate (WTI) crude oil price, which increased from an average of nearly $30 per barrel in the first quarter of 2016 to $45/b or higher beginning in the second quarter of the year. 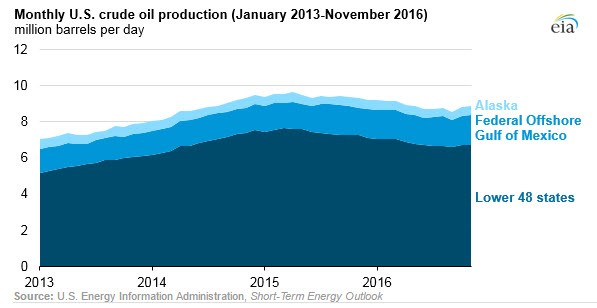 In contrast to the Permian, the data show other onshore regions in the U.S. experienced year-over-year production declines in November. However, EIA notes that recent drilling activity suggests that production may be increasing in these areas as well.

According to oilfield service company Baker Hughes, the total U.S. oil-directed rig count has increased by 123 rigs since November 2016, with 39 percent of the increase occurring in regions outside of the Permian.