If the famous scene in “The Graduate” were rewritten for today, that word – not “plastics” – might be what a family friend whispers in Benjamin Braddock’s ear.

These days, the future is in biobased materials and the bioeconomy is booming, a panel of experts told a Saturday audience at Commodity Classic in San Antonio.

“There’s a real growth space to replace the typical feedstocks used out there with a lot of things you’re producing on your farms right now – corn, soy, ag byproducts like the silage,” said Ben Gruitt, director of sustainability at the Corn Refiners Association. 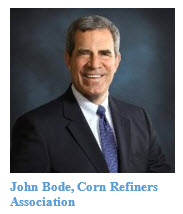 “There’s an opportunity to replace the carpet here with corn-based or soy-based carpet,” Gruitt said before rattling off a list of other products that could be made with renewable biochemicals: lanyards, cosmetics, cleaning agents, even building materials, which could be made out of renewable biomass.

The numbers don’t lie. A report last year from the Biotechnology Innovation Organization, citing McKinsey & Co. estimates, put worldwide sales of renewable chemicals at $252 billion in 2012 – more than half of that coming from biofuels and plant extracts. The sales represented about 9 percent of the worldwide chemical market, about $2.8 trillion at that time.

By 2020, McKinsey estimates biobased chemicals could increase to at least 11 percent of the overall world market – or $375 billion to $441 billion out of total sales of $3.4 trillion.

And USDA released a report last fall that found the bioeconomy in 2014 contributed $393 billion and 4.2 million American jobs to the economy, and is the leading source of domestic renewable energy in the United States.

“While biofuels and plant extracts continue to comprise half of the projected sales of biobased products in 2020, McKinsey expects the highest growth rates in sales of new biopolymers and renewable chemicals, biocatalysts for industrial processes and biologic medicines, as well as biofuels,” the consulting company said.

And who better to take advantage of this upsurge in biobased production than the agriculture industry? 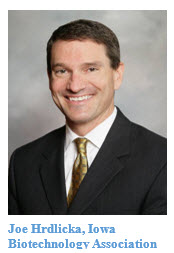 “No one in the world produces carbohydrates as efficiently as the American farmer,” Bode said. “That is the feedstock the bioeconomy can build on.”

The volatility in the petroleum industry, which supplies the vast majority of the feedstocks for the chemical industry, could help the ag sector gain a larger share of the market. “It’s not prudent to expect gas prices to stay where they are forever,” Bode said.

A significant factor in the growth of the industry has been an increasing desire for planet-friendly products.

“The consumer is driving it,” said Joe Hrdlicka, executive director of the Iowa Biotechnology Association. “They want sustainable, renewable products.”

And Rod Snyder, president of Field to Market, said, “If we can do this in a responsible way and actually demonstrate to consumers that farmers are sustainable, this will allow this sector to take off in a big way.” Field to Market is a 120-member organization that focuses on “defining, measuring and advancing the sustainability of food, fiber and fuel production.” Members include farmers, companies, retailers and academic institutions.

The picture for the industry isn’t all roses, the panelists said, mentioning the need for significant capital investment and the potential for regulatory roadblocks.

“The RFS deal is extremely confusing,” Hrdlicka said. “It’s caused a lot of questions, at least in Iowa’s mind. Where does the administration come down from a pro-bioeconomy perspective?” Hrdlicka said.

Bode says another obstacle is EPA’s treatment of biogenic carbon dioxide emissions – those that come from the use of agricultural feedstocks to create energy or bioproducts.

Farm groups contend that biogenic emissions are not greenhouse gases, arguing to EPA that crop-derived CO2 emissions are carbon-neutral by nature.

“You’re treating that one-year lifecycle the same way as the release of carbon dioxide from fossil fuels that have been captured for multiple million years,” Bode said. “It disregards the fact that . . . this natural life-cycle of plant growth is part of our environment.”

The Clean Air Act permitting process for plants that use biogenic feedstocks “effectively means you add a couple of years to the timeline for investment to come into operation and start production,” Bode said. “It also adds substantial risk for litigation.”

That may change with new EPA Administrator Scott Pruitt, however. Bode told the audience that he and other farm leaders, including Chris Novak, CEO of the National Corn Growers Association and Steve Censky, CEO of the American Soybean Association, will meet with Pruitt on Monday.

“The fact that we have an EPA administrator who’s interested in addressing issues like this and just talking with agriculture leaders is a very positive step,” he said. “I’m very hopeful we’ll get this federal regulatory roadblock knocked down. Certainly there is no legal reason to believe it can’t be done quickly.”

In order to help with investment, Hrdlicka said Iowa lawmakers have passed legislation setting up a refundable tax credit program. The program, which will go into effect in a year, will provide $10 million per year in credits for companies that manufacture any of about 40 chemicals, at 5 cents/pound.

“Is that enough?” Hrdlicka asked the audience, in reference to the $10 million per year. “I hope the answer to that is no, it’s not.”