WASHINGTON, Mar. 8, 2017 - Canada is the largest energy trading partner of the U.S., according to data from the U.S. Energy Information Administration (EIA). 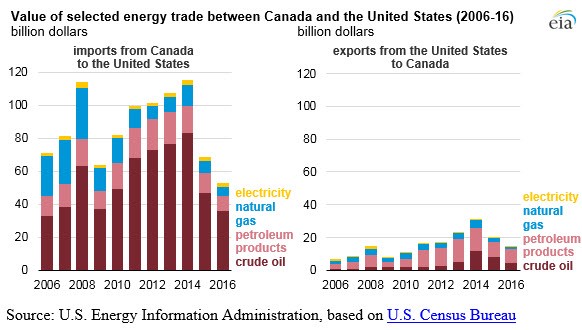 The agency notes that U.S. energy imports from Canada have exceeded energy exports by a large margin.

The data show that in 2016, the value of U.S. energy imports from Canada was $53 billion, while the exports were valued at $14 billion.

Until 2013, the agency says that virtually all U.S. crude oil exports went to Canada.

However, as the U.S. has exported more crude oil to other countries, Canada has made up a smaller share of U.S. crude oil exports.

U.S. electricity trade with Canada is increasing, EIA notes, and the agency says that although the amount of electricity imported over the Canadian border is a small part of the overall U.S. power supply, the transmission connections linking Canada and the U.S. are an important component of electricity markets on both sides of the border, where they also support electric system reliability.