WASHINGTON, Mar. 27, 2017 - Congressional Republicans are trying to pick up the pieces this week after the spectacular failure of their health care reform effort.

The decision by President Trump and House Speaker Paul Ryan to pull the bill on Friday was a major victory for hard-line conservatives who helped bring down the farm bill in 2013. They’re also likely to pose a challenge to passing a new farm bill next year.

The experience was all too familiar to Rep. Frank Lucas, the Oklahoma Republican who chaired the House Agriculture Committee in June 2013 when the House voted down the farm bill. “All I can say is that it looks like several members of leadership have joined me in the exclusive farm bill club of legislating,” he quipped.

The committee’s current chairman, Mike Conaway, R-Texas, joked to Agri-Pulse that he was relieved that he isn’t scheduled to move a farm bill this year. “I’m just happy that the farm bill is ’18.” 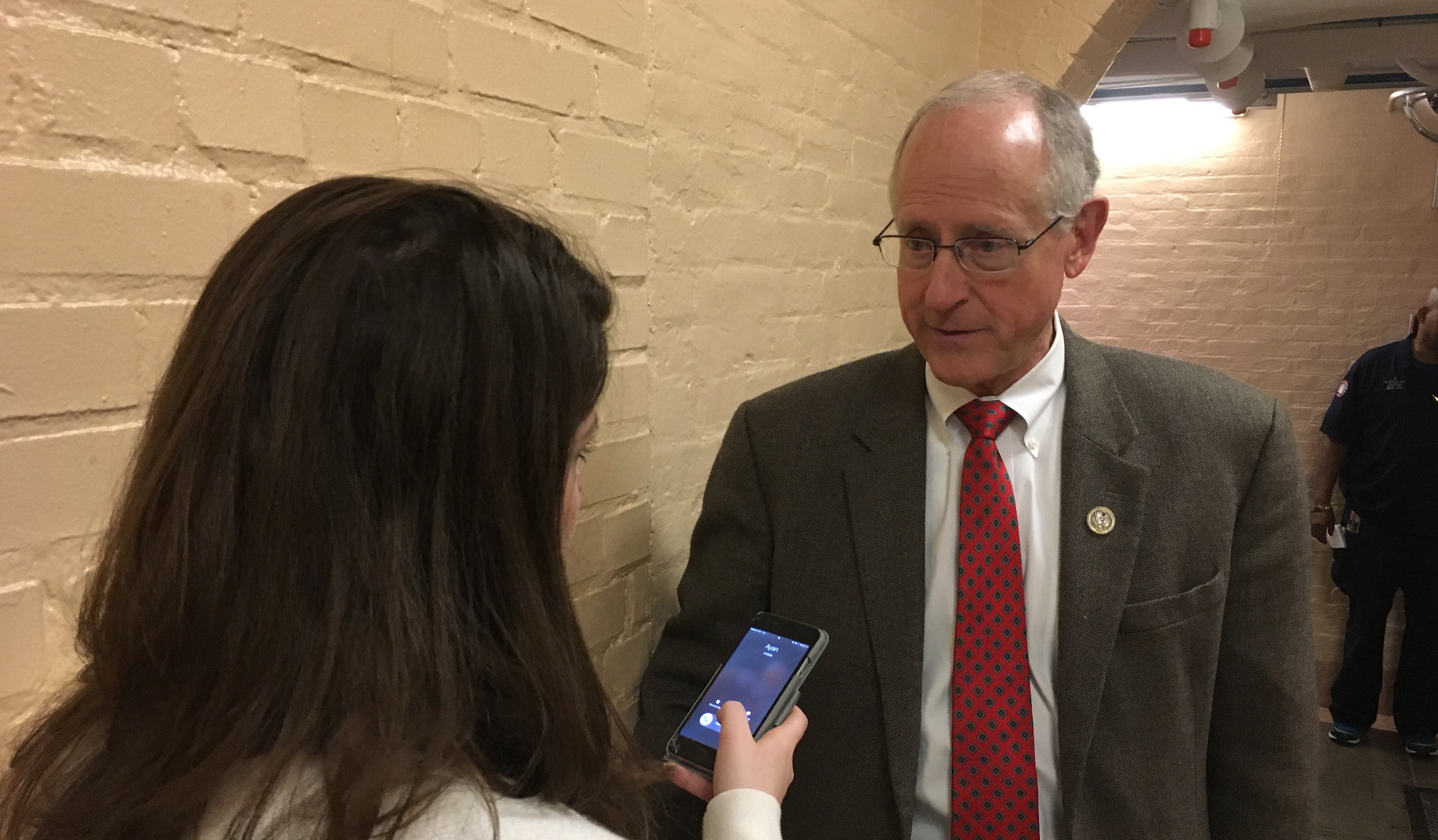 Conaway talks to a reporter in the Capitol basement after House Speaker Paul Ryan informed Republican lawmakers that they were moving on from health care.


Health care failure could force spending cuts. If Republicans can’t resurrect and pass the health care measure, the damage could extend to tax reform and the rest of the GOP agenda, including a massive infrastructure initiative and the farm bill.

The health care bill would cut taxes and reduce the federal deficit, and that in turn would make it easier for Republicans to pay for major cuts in personal and corporate taxes.

There’s concern now that if health care reform doesn’t pass the tax cuts will have to be smaller and offset by cuts in spending elsewhere in the federal budget. That’s because Republicans are using a budget reconciliation process both for health care and tax reform that won’t require them to get any Democratic votes. Under the reconciliation rules, “whatever tax reform we try, you’ll have to find spending cuts of an equivalent amount,” Conaway said.

Freedom Caucus notches another win. The conservative House Freedom Caucus, the same group that brought down former House Speaker John Boehner, is a big winner in the health care battle. Many caucus members still opposed the legislation despite winning concessions and getting repeated personal appeals from both Trump and Vice President Mike Pence.

That group’s success demonstrates that Conaway will almost certainly need Democratic support if he’s going to get that legislation passed next year.

But many Republicans are clearly frustrated with the Freedom Caucus’ rigid stance on health care, and Conaway says the group runs the risk of going too far. Trump is “not a guy who likes to see the goal post move and not get to a deal. We’ll see how this all turns out,” Conaway said.

NFU pleased with health bill’s failure. The National Farmers Union opposed the health care bill and was pleased that Republicans cancelled the vote. NFU said the bill’s cap on Medicaid would have harmed rural hospitals. “Rural enrollment in Medicaid is higher than in urban America, and rural hospitals are more dependent on Medicare and Medicaid payments than their urban counterparts,” said NFU President Roger Johnson.

Tax reform by fall, Mnuchin says. As difficult as it has been for Republicans to move health care reform, moving a major tax bill won’t be easy either. That’s especially true if the GOP tax plan includes the controversial border adjustment that could raise the cost of everything from farm inputs to T-shirts and avocados.

But Treasury Secretary Steve Mnuchin says he believes that Congress will finish a sweeping tax measure by this fall. He says that the administration has spent the last two months working out details of its proposal and will be ready to release it soon.

Mnuchin: Health care tougher to pass than tax cuts. “We are designing it from scratch and running through a lot of scenarios,” Mnuchin said Friday at an event sponsored by the news company Axios. The event was held before the health care vote was cancelled.

The biggest question with tax reform is how to pay for the tax cuts, a problem that could be more difficult if the health care bill can’t be resurrected.  House Republicans hoped to pay for tax cuts in part by making the corporate tax border adjustable: Companies would pay the tax on domestic sales but not products that they export. That change would raise more than $1 trillion in revenue in 10 years.

Mnuchin stopped short of endorsing the border adjustment and said there may have to be some exemptions. He suggested, for example, that the tax could encourage oil to be exported overseas for refining. “Whatever we do we want to make sure it’s simple and it works,” he said.

Mexico looks to Brazil, Argentina for corn imports. Lacking clarity from U.S. negotiators on the future of the North American Free Trade Agreement, Mexican leaders appear poised to offer Brazil and Argentina the same duty-free access that U.S. corn growers currently enjoy under NAFTA. “I am pretty optimistic about the possibility of having a deal with these countries soon,” Juan Carlos Baker, Mexico’s deputy economy minister, told the Financial Times in an interview published Sunday.

American farmers sent $2.4 billion worth of corn to Mexico in 2015. According to the most recent numbers available from USDA, Mexico is the top market for U.S. corn and the second largest customer for U.S. distiller's dried grains.

Livestock, poultry appeal to USDA to kill GIPSA rule. The meatpacking industry has joined livestock and poultry groups in asking the Trump administration to withdraw a rule that would set standards of proof for challenging marketing practices in the livestock and poultry industry. The rule, which the outgoing Obama administration issued in December, is set to take effect April 22.

The interim final rule is intended to aid producers in challenging processor contracting and buying practices. In comments to USDA, the North American Meat Institute, which represents packing companies, said the rule would “set in motion a cascade of litigation” that would “roll back the significant process” that the industry has made in meeting consumer demands.

Farmers who support the rule say they have been unfairly required to prove that they harmed the entire market. The new rule would tell courts that a practice can violate the Packers and Stockyards Act without a legal finding of harm to competition.

Farmers are at the mercy of a shrinking number of beef, pork and poultry companies that dominate the industry, the National Sustainable Agriculture Coalition said in its comments.  The companies “use unfair practices and provide undue preference as a method of retaliation to put noncompliant farmers out of business,” NSAC said.

He said it. President Trump seems to have put away the fast food since he took office. Mnuchin said that he no longer eats KFC or McDonald’s. “There’s great food there,” Mnuchin said. “The chefs there are great.”