WASHINGTON, March 29, 2017 - As the Trump administration prepares to execute its trade agenda through new deals or reworking pacts already on the books, agriculture is holding its collective breath.

The industry’s hope is that the new deals will be – as promised – better than the status quo for agriculture exports. Cargill CEO Dave MacLennan said Tuesday at the Financial Times Commodities Global Summit in Switzerland that the administration may be starting off on the wrong foot.

While not specifically criticizing the Trump administration’s “America First” style of trade rhetoric, MacLennan told reporters on a call after his remarks at the Summit that “economic nationalism” only leads to countries being “more guarded, more self-focused, and more inflexible.” 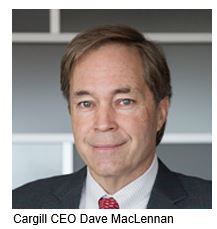 “We can’t afford to repeat these past mistakes,” he said, referring specifically to Great Depression-era policies. “Today’s global proliferation of ‘me-first’ trade postures threaten to destabilize decades of progress and negotiated agreements.”

MacLennan said he isn’t aware of any kind of agribusiness roundtable with the president that has occurred or is planned in the near future, but said he’s optimistic his message could break through if given the opportunity.

"I think we can be pessimistic about it and take the other side of it and all kind of crawl into a hole and wait for the worst to happen, or we can try to have the dialogue and impress upon the administration and those that have experienced the benefits of open trade and just talk about the benefits of it,” MacLennan said, pointing especially to the number of Trump White House officials with private sector experience. “I remain optimistic that we can forge a way forward.”

In the meantime, MacLennan said Cargill is not reevaluating any of its current business based on changes in the trade climate. He said the company remains “optimistic that there won’t be major disruptions in trade policy or trade activities.”