Solar industry association squares off against Suniva in trade fight

WASHINGTON, May 17, 2017 - Major solar industry players are lining up to fight a Suniva trade petition that calls for new tariffs on solar cells and modules from countries around the globe, potentially doubling prices and causing demand for solar energy to drop.

At issue is a Section 201 petition to the International Trade Commission (ITC) that was filed last month by Suniva Inc., a manufacturer with facilities in Norcross, Georgia, and Saginaw, Michigan. The scope of the petition is limited to crystalline silicon photovoltaic (SCPV) cells and modules and does not include thin film photovoltaic products. Modules, laminates, and panels produced in other countries using cells manufactured in the U.S. would also be excluded from the petition.

Describing the petition as an “existential threat to the broad solar industry and its 260,000 American jobs,” Abigail Ross Hopper, president and CEO of the Solar Energy Industries Association (SEIA), said Monday that her board members voted “overwhelmingly” to fight the petition “every step of the way.”

“We want to support U.S. manufacturing jobs, but this petition is not the right approach,” Hopper emphasized. 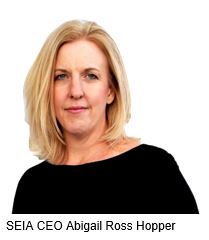 In a letter to the ITC, SEIA argued that Suniva is not “representative” of the domestic CSPV cell/module industry and therefore, does not have standing to bring the action.

As of Tuesday, there was only one other industry response to the petition and that came from Houston-based solar industry provider Sunnova, which opposes the Suniva petition because it would “significantly harm the U.S. economy by destroying jobs.”“Suniva accounted for just 21 percent of U.S. production of CSPV cells and modules in 2016 and 14 percent in 2015,” the trade organization pointed out, while noting that other industry members have not expressed support for the trade action.

“This proposed action by a small investment firm that made a poor investment decision should not be allowed to hurt American jobs and consumers,” Sunnova CEO William Berger wrote.

The ITC already imposes tariffs on solar components from both China and Taiwan, but Suniva asked the federal government to impose a blanket tariff on imported solar cells and modules from all countries, claiming that the company would not be able to recover without this type of federal intervention.

Suniva declared Chapter 11 bankruptcy just a couple of weeks before filing the petition.

“Solar cell manufacturers in the United States continue to face steep price competition from China, as well as non-China-based overseas manufacturers not subject to United States tariffs,” explained David Baker, the company’s restructuring officer, in a court filing. Manufacturing that was previously based in China has moved to countries in Southeast Asia and elsewhere to avoid the U.S. tariffs, he pointed out.

“As a result, these tariffs have not been effective in preventing dumping of Chinese solar products into the United States. These pressures have been exacerbated by a recent drop in demand in the Chinese market resulting from the Chinese government announcing, in 2016, that it was lowering subsidies for solar energy purchases. This has resulted in a production glut, further driving down global prices.”

Suniva is largely owned by Chinese solar panel maker Shunfeng International Clean Energy, which bought 64 percent of the firm in 2015 in an effort to avoid U.S. tariffs on panels made in China and Taiwan.

The firm has experienced several ups and downs since then-Gov. Sonny Perdue welcomed the Georgia Tech spinoff as the first solar manufacturing plant to Georgia in 2008, bringing with it an anticipated 100 jobs in the first year. 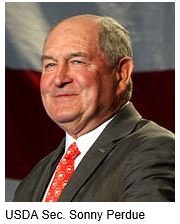 This new solar cell facility is a perfect example of the way Georgia’s investment in research and development pays dividends by producing innovative technologies that help companies grow,” said Perdue, who now serves as U.S. Secretary of Agriculture.

Since that time, the startup has received over $8 million in U.S. Energy Department grants, including $1.25 million as recently as October 2016. In December, the firm held a ribbon-cutting to announce an expansion. However, by March of this year, Suniva ordered a temporary shutdown of its Georgia facilities and by mid-April, the company filed for bankruptcy.

Hopper said the ITC will soon announce whether it will consider Suniva’s request. If it does, the commission will have four months to determine potential injury. If so, the ITC will have another two months to suggest a remedy. Then the decision will rest with President Trump, who has promoted an “all-of-the-above” energy strategy but also criticized both solar and wind energy during his presidential campaign.

If a decision gets to the Oval Office, Trump can either accept the commission’s proposal, modify it, or determine the proposal is not appropriate.

SEIA is determined to make sure the case does not advance that far, but if it does, they want to make sure that key members of Congress and the new administration understand what’s at stake.

Any decision to impose tariffs “will be vastly outweighed by the competing headline that you have just put hundreds and thousands of workers out of a job,” Hopper said.