WASHINGTON, April 5, 2017 - Before the next farm bill is written, cotton growers are eager to get into the Price Loss Coverage (PLC) program and are pushing to get the payments included in a congressional agreement to fund the government for the rest of fiscal 2017. Appropriators on Capitol Hill are trying to negotiate a spending measure that can attract enough Democratic support to pass the Senate and avert a government shutdown when the continuing resolution that is currently funding the government expires April 28.

Sources familiar with the cotton industry’s proposal said some details were still being worked out. But the proposal will be modeled after a plan the National Cotton Council developed late last year that would create a new reference price for cottonseed under PLC. The proposal would have allowed farmers to convert “generic” base acres, acreage that was cotton base prior to 2014, to other crops. The plan would offset much of the cost of the PLC cotton payments by assuming that they would replace subsidies producers would have received for peanuts and other commodities.

Getting the plan in the 2017 spending measure would solve a major problem for both growers and the House and Senate Agriculture committees: It would create a funding stream, or baseline, for cotton as lawmakers prepare to write the next farm bill. That would mean lawmakers wouldn’t have to find another source of funding for cotton. And, obviously, by addressing the issue now, cotton growers would receive assistance well in advance of when they could get payments under the next farm bill. Even if a new farm bill is enacted in 2018, cotton growers wouldn’t receive their first PLC payments until 2020.

Ronnie Lee, a Georgia grower who is president of the National Cotton Council, told a House Agriculture subcommittee on Tuesday that getting cotton addressed in the spending bill would serve as a “bridge” to the next farm bill. He said that the farm bill should take care of the needs of “all producers and all commodities in all regions of the country.” 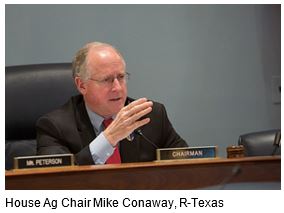 It’s not yet clear how large the spending measure will be. It could be a combination of detailed spending bills from some agencies and continuing resolutions for others. The chief Senate negotiator on USDA’s budget, John Hoeven, a North Dakota Republican who chairs the Senate Agriculture Appropriations Subcommittee, told Agri-Pulse that accommodating the cotton industry’s request would be “challenging.” But the chairman of the full Senate Appropriations Committee, Thad Cochran, R-Miss., is a supporter of the industry, as is the chairman of the House Agriculture Appropriations Subcommittee, Robert Aderholt, R-Ala. Aderholt told Agri-Pulse he was working on proposal to get it included in the spending measure.

Another cotton champion is the chairman of the House Agriculture Committee, Mike Conaway, R-Texas. He said that he’s working every angle to get cottonseed eligible for PLC.

The industry’s fallback plan is to ask the incoming agriculture secretary, almost assuredly former Georgia governor Sonny Perdue, to make cottonseed eligible for PLC as an “other oilseed.” It would be much more costly to taxpayers, and could run into problems with the White House, for Perdue to address the issue because he could not set a reference price different than the one in law for “other oilseeds,” which is 20.15 cents per pound, or $403 per ton. (The industry has been seeking a special reference price for cottonseed significantly lower than that.) Perdue also could not change other program rules to offset the cost of the PLC payments for cottonseed.

If that option were to fail, the industry could ask Perdue to authorize a repeat of the one-time ginning cost-share payments that then-Agriculture Secretary Tom Vilsack approved in 2016. That option doesn’t help the industry long term, however, because such temporary payments do not increase the farm bill baseline.

In 2015, the industry had appealed to Vilsack to make cottonseed eligible for PLC as an “other oilseed,” but he declined to act, saying he lacked the necessary authority under the farm bill.

“We’re in a real crisis. It’s a real disaster,” Republican Rep. Jodey Arrington, said of the industry’s situation in his West Texas district. “If we let it continue much longer it will fundamentally alter our economic landscape, and I imagine there are a lot of rural communities in the cotton belt that are similarly situated.”