WASHINGTON, April 5, 2017 - The director of agricultural development for the Bill and Melinda Gates Foundation says the U.S. and other developed countries need to continue to support agricultural research if farmers are to meet the demand for food from a burgeoning world population.

“We need to feed more with less,” Nick Austin told Agri-Pulse on the sidelines of last week’s Global Food Security Symposium hosted by the Chicago Council on Global Affairs in Washington. Austin, who took over the position with the Gates Foundation in January, was one of the speakers on a panel on “leveraging the power of research and development.”

Austin, formerly the director of the Australian Centre for International Agricultural Research, echoed the findings of a report released that day by the Chicago Council, which called on the U.S. to continue its key role in the battle against global hunger and malnutrition.

“Achieving global food security is still squarely in American interests and should be renewed as a centerpiece of foreign policy,” the Council said in the report.

Austin points out that support for ag research has several types of benefits. Helping small farmers in sub-Saharan Africa can not only help to alleviate hunger, but it can also help create a new class of consumers, ready to buy goods produced in the U.S. It can also give meaningful employment to people in Third World countries, relieving the threat of food-related protests and riots. 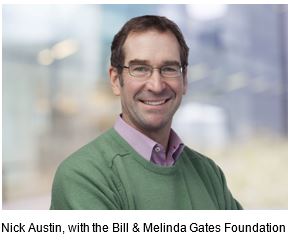 The Arab Spring, Austin notes, began in 2011 in Tunisia when a young street vendor set himself on fire to protest what he saw as his hopeless condition. Protests followed, then a government crackdown led to more protests, and within a month, President Zine el-Abedin Ben Ali had fled the country.

“I’d like to look at the glass half-full scenario, with ag research leading to improved conditions, especially for small-holder farmers, many of which are women,” Austin said. He cited research by the Farm Journal Foundation which found that the high-yielding wheat and rice varieties developed by the Green Revolution during the 1970s led to “substantial growth” in Asian and Latin American agriculture. Those same varieties have been used with success in the U.S., the Farm Journal Foundation said, adding $3.7 billion in value to the U.S. economy by 1996, “an astonishing return to taxpayers on the $134 million investment.”

During the panel discussion, speakers discussed how agriculture must adapt to a number of challenges, including climate change, which is bringing increased temperatures, erratic rainfall, flooding and increased pests and disease. At the same time, Austin said, the world’s farmers need to boost food production by about two-thirds to feed a global population of more than 9 billion by 2050, up from 7.5 billion at present.

“It’s a real challenge, but it can be done,” Austin said, citing several hopeful signs, including work being done with so-called Green Super Rice in China and the Philippines, and research at the University of Illinois at Urbana-Champaign where scientists are manipulating photosynthesis in some key food groups, including rice and cassava, to increase productivity. That project is being supported by a five-year, $25 million Gates Foundation grant.

But investing in agriculture isn’t cheap. Since 2005, the Gates Foundation has invested over $4 billion in Africa, with the goal of helping the continent “fulfill its potential as an agricultural powerhouse.” Austin stressed that governments need to be contributing, not just to help the poor, but for their own benefit, given the “high rate of return” from investments in ag research.