Early in the pandemic, federal funding boosted efforts to get farm-fresh produce to people in need of food. Nearly a year after the Farmers to Families Food Box program ended, some participating distributors, farms, and food banks have found ways to continue reducing food waste, expanding markets and increasing access to fresh fruits and vegetables for people who turn to food banks or pantries.

For now, the efforts pale in comparison to the federal program, which across five rounds of coronavirus relief funding spent more than $5.5 billion in about a year. But it also demonstrated how agriculture and food banks could build lasting relationships that benefit both.

For Steve Brazeel, president of SunTerra Produce, based in Brawley, Calif., participating in the food box program was so beneficial he knew he wanted to continue it in some way after the federal support ran out. His team has spun off Project Food Box, a non-profit whose mission looks a lot like what Brazeel started doing in spring 2020: Sourcing, packaging and distributing produce from farms to communities in need.

Brazeel says before the pandemic, his only connection to food banks was if he had produce he couldn’t sell that was still good to eat. He might find a food bank that could take it.

“I did not have a relationship with these food banks and 501(c)3 organizations before this program started,” he said. When the food box program launched, he quickly saw that his existing warehouse and distribution systems, which were practically idle because of the pandemic, and his myriad farm partners could provide fresh, quality produce to hungry people. He started building connections with the food banks and non-profit partners throughout California and the southwest who could get the strawberries, lettuce and other top-grade produce to people who needed it.

Their commitment to feeding the hungry moved him.

“It blew me away, and it really changed me,” he said. “It's one of these things where, if the pandemic hadn't appeared, it never would have crossed my mind.”

As he got to know these groups, he learned they had typically seen fresh produce as prohibitively expensive.

The federal program allowed Brazeel to keep more than 100 workers employed during the early months of the pandemic and to buy produce from farmers who otherwise might have had to disk crops back into the ground.

“And then, of course, it's the food bank partners and the 501(c)(3)s who were blown away by the quality we were providing,” he said. “They were so thankful and just so appreciative of what we were doing.” 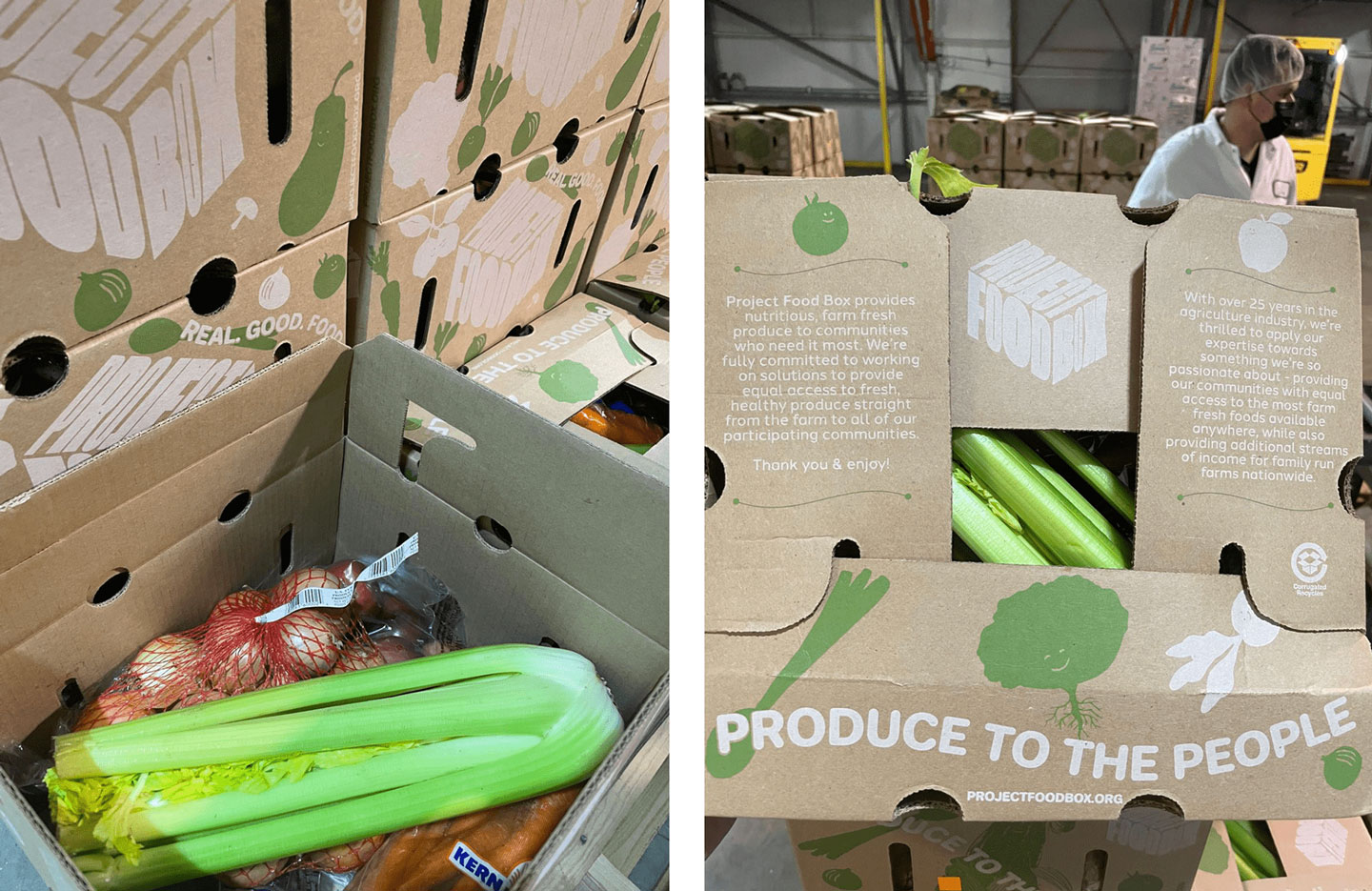 Now, Project Food Box is continuing that mission-driven work, with fiscal sponsorship from OneOC in Orange County and a growing number of partners. Brazeel offers an example of how redistributing food this way can make sense for his business, his partners and food banks.

Say a packing house has oranges that are USDA quality but are either too small or too big for the company's customers. SunTerra can find a price that is higher than the juice price the packer would have gotten just to be rid of the fruit, but lower than the price for the exact right size and shape. With no need for retail packaging, Project Food Box can put those oranges in a box and offer it to food banks at a price they can afford.

Peter Wells, the project director for Project Food Box, says philanthropic funding will be a part of continuing the program. But there are also other channels for distributing boxes of fresh produce that they are exploring.

For instance, in conversations with health insurance companies around the country, they’ve identified some that are offering fresh produce boxes as a benefit for patients during their first months after a diabetes diagnosis. In this type of partnership, the insurance company would buy the boxes from Project Food Box and they would be given to the patients. Most of the inquiries for that program have come from outside California, Brazeel said.

Beyond California, SunTerra and Project Food Box have a distribution center in Dallas and are exploring setting one up in Atlanta. Brazeel said the focus would still be on helping local farmers and filling boxes with what they grow during their season. But not every region has California’s or Georgia’s diversity of crops. He’s been talking with people at Feeding Kentucky, which already has a farms to food banks program.

“They don't have the cornucopia of items that we have out here,” Brazeel said. “The Kentucky box was pretty sad some times of the year, depending on weather and what was available.” They’re exploring how to diversify with products not grown in the state or not available during the winter. “And then use those with some sort of combination program with locally grown products,” he said, to create boxes that are nutritionally sound and still support local farms.

When USDA ended the Farmers to Families Food Box program, it shifted some fresh produce purchasing into The Emergency Food Assistance Program (TEFAP). While much smaller, the effort addressed some concerns food banks raised about distribution of the original fresh food boxes.

Wes King of the National Sustainable Agriculture Coalition says TEFAP cannot fill the produce gap and wasn't set up to do so.

“TEFAP doesn't do a good job with fresh produce; it's very much focused on shelf-stable processed food,” he wrote in an email to Agri-Pulse. He added TEFAP also has been more successful in urban areas than in rural ones. Earlier this year, USDA announced a new round of grants for TEFAP, focused on expanding the program’s reach into “remote, rural, Tribal, and/or low-income areas that are underserved by the program.”

King also pointed to the new Local Food Purchasing Assistance Program, which he described as “a cooperative agreement program with states to provide them funding to start up their own state-run food box programs.” It’s just getting underway. And there’s a bill in Congress now, the Fresh Produce Procurement Reform Act, that could add produces boxes into USDA programs in the next farm bill.