Home » Buying or renting, acquiring farmland is not for the faint of heart
Rural

Buying or renting, acquiring farmland is not for the faint of heart

WASHINGTON, April 12, 2017 - Land values may have declined a bit from the peak, but folks hoping to start farming or expand operations know that gaining access to new ground is still a challenge.

“You have to be wealthy to buy land,” declares Gary Schnitkey, agricultural economics professor at the University of Illinois. “If you are starting out, you’re not going to be able to cash flow purchased farmland. There is no way that will work. Just think: 80 acres in central Illinois at $10,000 per acre – you have to have $800,000 to buy just 80 acres; a million dollars for 100.” He points out that even firmly established farmers in his state are leaning heavily toward leases over buying land. Operators with more than 1,000 acres of cropland, on average, he says, own just 15 percent of the land they farm.

While cropland values in Illinois are among the highest in the country, prices have soared nationwide. Though they have come off their 2014 peak, USDA reports the national 2016 value of cropland at $1,330 per acre, on average, is still up by $800, or by 150 percent, since 2000.

At such prices, land payments are usually beyond what farmers can afford in crop production budgets, in part because other costs in those budgets have also escalated and haven’t fallen back in step with market prices. For example, research by Illinois Farm Business Farm Management and the University of Illinois compared the total value of machinery on Illinois grain farms in 2005 with values in 2015. In 2005, a 1,000-acre farm had nearly $300,000 invested in machinery, while in 2015, it had about $600,000, or $640 per acre. Also, spreading the cost of machinery over more acres did not greatly alter the picture: A 2,000-acre farm had $260 per acre machinery investment in 2005; $590 in 2015. 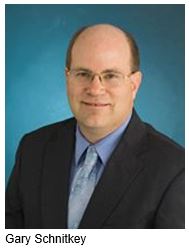 While the high costs of land and machinery make entry elusive for wannabe farmers, it has piled added debt onto current operators, leaving further land purchases unfeasible for many. USDA Chief Economist Robert Johansson projected in his recent annual outlook, for example, that American farmers’ debt-to-asset ratio will climb to nearly 14 percent this year, up from a low of 11 percent in 2012, owing in part to slippage in farm real estate values. But that’s just the average, and the debt picture is darker in some sectors: about one in five producers with cotton, wheat, hogs or poultry as their primary commodity face a debt-to-asset ratio of more than 40 percent, he reported. Worse, more than a third of farmers under age 35 are highly or very highly leveraged.

Meanwhile, for those wanting access to farmland, renting is hardly an easy alternative.

True, renting land looks comparatively better than buying these days. The average U.S. cash rent for cropland, at $136 an acre in 2016, is 14 percent more than in 2000. But that rent level was just 3.2 percent of the average price of cropland, down markedly from 8 percent in 2000.

The ballooning spread between purchase cost and rental rates can be attributed to years of very low loan interest rates, which make the anticipated return on farmland comparatively higher than those on bonds and other investments, thus pushing land values up, Schnitkey said. And while farmland values have started coming back down, cash rents will also fall further because profits from farmland have fallen, he expects.

Broadband is the linchpin in farm productivity of the future
Roberts: Not the time for a revolutionary farm bill

Creighton University’s Rural Mainstreet Index, a survey of rural bankers in nine states of the Great Plains and western Corn Belt, plus Colorado, reported a similar view of cropland rents for 2017 – averaging $212 per acre, down 16 percent from last year.

So, says Schnitkey, “Farmers rent land, and the margins are really thin,” squeezed between soft market prices and bloating expenses.

“Renting is going to be the usual way for younger farmers to access land,” agrees Daniel Bigelow, chief author of a 2016 Farmland Tenure Report by USDA’s Economic Research Service. But, he points out, to rent land, aspiring or expanding farmers need to find land available and in a suitable location. And for beginning farmers, “it’s not always the case that land is available to them,” he says.

The first difficulty, Bigelow says, is that while 40 percent of U.S. farmland is rented out to someone, nearly all of those rented acres are locked up in long-term lease arrangements. His 2014 survey found that landowners expected  at least 10 percent of all farmland to be transferred to new owners or new renters within five years, “but just over 2 percent of farmland was expected to be sold in arm’s length sales” in that period.

That situation ensures high competition for the scarce land available to young farmers wanting to get started or expand. The survey found that all farmers aged 64 years and younger, on average, rent at least some of their agricultural land, and a fourth of farmers aged 34 and younger rent all of their land. (see graph). 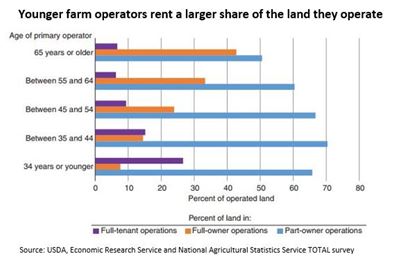 What’s more, Bigelow says, the research found that most who want to rent farmland want a lot more acreage than the landlord has available to lease, and that means securing leases from multiple landlords. “So, for a beginning farmers, it is going to be tough to break into that market and rent the land you need for your operation,” he says.

USDA and some state agricultural departments are trying to give young and beginning farmers a hand up to secure land. For example: