Home » REAP, by the numbers, may surprise you
News Energy

REAP, by the numbers, may surprise you

The latest numbers from USDA Rural Development show the Rural Energy for America Program, which was originally created in the 2002 farm bill, has awarded nearly $3 billion in grants and loan guarantees since it was reauthorized and given substantial funding in the 2008 farm bill. (Click here for a complete rundown of how REAP funds are spent.) 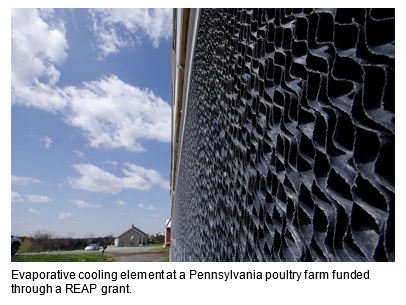 Some 60 percent of the projects funded (6,453) were energy efficiency projects. Over the eight years, they received $149.7 million in REAP grants, while the program guaranteed $52.8 million in loans. Eligible energy efficiency improvements include high efficiency heating, ventilation and air conditioning systems (HVAC); insulation; lighting; cooling or refrigeration units; doors and windows; electric, solar or gravity pumps for sprinkler pivots; switching from a diesel to electric irrigation motor; and the replacement of energy-inefficient equipment.

USDA says 4,289 renewable energy projects were awarded $193.4 million in grants or had loans totaling $572.9 million guaranteed. The money can be used to purchase, install and build renewable energy systems, such as biomass (for example: biodiesel and ethanol, anaerobic digesters, and solid fuels); geothermal for electric generation or direct use; hydropower below 30 megawatts; hydrogen; small and large wind generation; small and large solar generation; and ocean (tidal, current, thermal) generation.

More wetlands litigation may be coming to a court near you
Pheasant numbers on the rise, but still have a ways to go

Agricultural producers have had the greatest number of applicants receiving REAP money, some 7,150, compared to 3,870 small rural businesses. But producers held only a slight edge in grants received – $182 million – laid against the $175.2 million to small businesses. The latter group held a whopping 9-1 advantage in loan guarantees, with REAP making $562.9 million available to cover their loans compared to the $62.9 million put up for ag producers. And small businesses also had a huge lead in total project costs, nearly $3 billion compared to the $761.4 million in total costs estimated for ag producer projects.

North Carolina, a major poultry and pork producer, led by far in the amount of loans guaranteed by REAP, $333.9 million. And the state led in total project costs at $838.8 million. Other states with sizeable loan figures include Oregon ($69.5 million), Iowa ($37.2 million) and Minnesota ($19 million).