Regulators holding fistful of livestock genetics magic at the gate

WASHINGTON, April 19, 2017- A mounting wave of new genetics technology is on its way, promising improved health and growth to farm animals, along with improved management tools and profits to livestock owners.

Still, use of this new channel of technological wonders, called gene or genome editing (see text box) apparently awaits the Trump administration’s decisions about what kind of regulations they’ll impose. 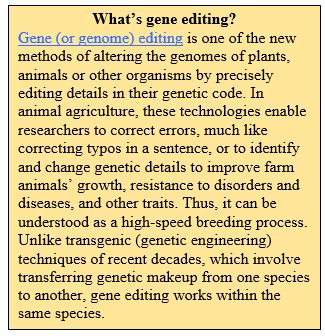 Bubbling up from technology companies and universities, and research collaborators in both, are gene editing techniques to breed cattle and swine immunity to foot-and-mouth disease, cattle that produce antibodies for fighting cancer in people, poultry resistant to highly pathological bird flu and, for example, improved heat-tolerance into cattle breeds that built their genomes in cool, northern-European climates.

The world market for shares of promising genome editing products in human and animal physiology, immune responses and other medical and agricultural applications is likely to grow to $8.1 billion by 2025, according to a projections by Grand View Research of California.

In the agricultural arena, for example, already at least two developers, Acceligen (the agricultural genetics subsidiary of Recombinetics) and a collaborative of university and Genus researchers, can offer genome editing technology to ensure strong resistance to PRRSV (the disastrous porcine reproductive and respiratory syndrome virus).

But that’s just one item on Acceligen’s gene-editing menu of marvels. For the dairy sector, it has the right stuff for hornless (polled) cattle. It is a trait dairy farmers have long been able to select for Holsteins, which would relieve cattle from the stressful removal of horns or horn buds plus save dairy farm labor. However, unfortunately, choosing the trait has meant sacrificing other desired traits for health, milk production and more.

So, says Tad Sonstegard, Acceligen’s chief scientific officer: “How do you get polled cattle without having to physically dehorn the animal or backcross in polled genetics, slowing your genetic improvement program? That is where our technology comes in.”

With its new gene editing for hornless cattle, “we could make (the genetics for) that animal tomorrow in a laboratory . . . and move it into an animal once we validated that it has been properly edited,” Sonstegard explains. His company secured a USDA grant to edit the cattle genome for the polled trait, qualifying for the funds because the trait is associated with both animal welfare and safety for people handling cattle. Acceligen then hired scientists at the University of California, Davis, to produce the technology.

Amid the stream of such animal gene editing magic, the Food and Drug Administration posted its intent in January to regulate genome editing as it has transgenic processes, generally called genetic engineering. It is part of a move that the FDA, USDA and the Environmental Protection Agency took at the end of the Obama administration to “modernize the regulatory system for biotechnology products,” as then-President Obama had suggested in a 2015 memorandum. FDA’s proposed guidance would specifically apply regulatory authority over “animals intentionally altered through use of genome editing techniques.”

That may not be helpful for industry, he says, because “we made animals (genetic changes) two to three years ago in some cases. So at a minimum, the regulation is three years behind the technology.” And, he says, “I just don’t know if . . .  they (FDA) have reached the place where that approach is equal to their proposed regulation.” And, he worries, “If it’s too expensive and it takes too long, it won’t fit into the (livestock) system.” 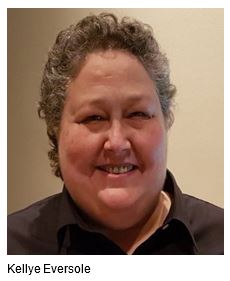 Meanwhile, Kellye Eversole, a veteran biotechnology policy consultant in Bethesda, Md., doesn’t agree that commercial production of gene-edited animals must wait for FDA to act. The agency doesn’t regulate genome editing now, “and it would be a change in FDA principles if they did look at what technology was used.” Instead, “they’ve always been very product oriented.” That is, she says, the results of gene editing “aren’t different than what is done every day” in conventional breeding practices . . . “modifications that go on all the time” within an organism’s genetic makeup.

Regulators would be unable to differentiate with certainty the products of gene editing from other conventionally bred specimens because gene editing involves no introductions of foreign genetic matter, according to Eversole and Sonstegard.

Brad Shurdut, an Intrexon vice president for regulatory and government affairs, emphasizes that a product-based approach is needed by FDA. Intrexon is known for developing a host of transgenic products, including male mosquitos that cause female mosquitos’ offspring to die before adulthood. A subsidiary, AquaBounty, is developing a fast-growing freshwater salmon called AquAdvantage. Intrexon is also editing the genomes of tilapia, for example, to produce large, higher-quality fillets, so genome editing looms large, for that company, too.

FDA’s regulations must ensure that products are safe and effective, Shurdut says. But also, “it is important to us and to agriculture that we have a transparent, predictable regulatory system so we can understand . . . the regulatory pathway. Obviously that has impact on our ability to bring innovation forward.”