LEESBURG, Va., May 1, 2017 – USDA is putting a hold on regulations in the National School Lunch Program that would require less salt and more whole grains in cafeterias.

In making the announcement, at Catoctin Elementary School in Leesburg, Virginia, Agriculture Secretary Sonny Perdue also said USDA will lift restrictions to allow schools to serve flavored, 1 percent milk instead of the non-fat that is now required under law.

Perdue stressed that he was not rolling back any provisions of the Healthy, Hunger-Free Kids Act (HHFKA) that was enacted in 2010 and required a gradual increase of nutritional standards, including the reduction of sodium and increase of whole grain-rich products in the food served by schools.

“We’re not winding back any nutritional standards at all,” he said. “We’re giving these … food-service professionals the flexibility to move as we get a healthier generation,” Perdue said, even applauding former first lady Michelle Obama for her efforts to promote healthier food in schools.

Perdue said he was addressing concerns that the rising standards were too expensive for some schools and that students were not eating the new fare that was deemed to be healthier.

The new USDA secretary was joined for lunch with students by Senate Agriculture Chair Pat Roberts, who said that during the last Congress he had the opportunity to visit school cafeterias all across his home state of Kansas.

“Time and time again, I heard the same story: ‘Yes, we are serving more nutritious meals, but certain aspects of the standards have gone too far,’” said Roberts. “Kids are rejecting the food, and we’re seeing a lot of it end up in the trash.”

Supporters of the HHFKA point to the fact that nearly all of the school districts in the country have complied with the new standards, but Perdue dismissed that. 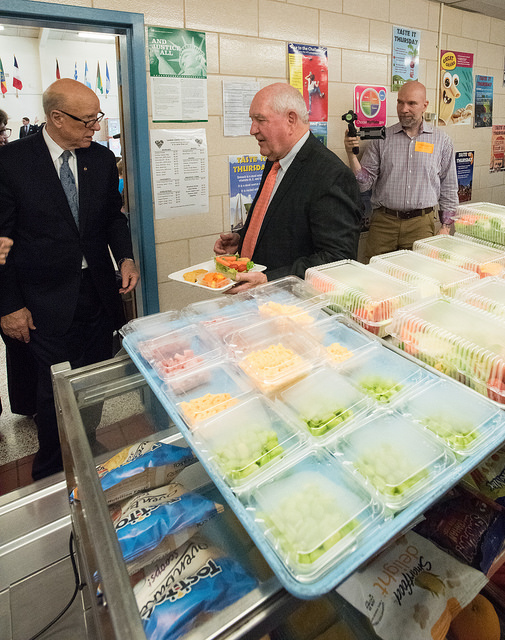 Roberts and Perdue grab lunch at a Virginia school

“I don’t know about you, but only in Washington can a program be called a success simply because schools are doing what they are ordered to do by the federal government upon the threat of federal funds being withheld,” he said. After the lunch, Perdue signed a proclamation promising to write the new regulations.

The Center for Science in the Public Interest said weakening the regulations would be a mistake. The rising nutrition standards are an important step in improving child health in the U.S., the group said.

“Ninety percent of American kids eat too much sodium every day,” said Margo Wootan, CSPI’s director of nutrition policy. “Schools have been moving in the right direction, so it makes no sense to freeze that progress in its tracks—and allow dangerously high levels of salt in school lunch.”

During Perdue’s visit, a couple dozen protestors demonstrated in front of the school in Leesburg, about an hour west of Washington, D.C.

Connie Cota, a Leesburg resident with three grandchildren in Catoctin, said the government needs to speed up the process of making school meals healthier, not slow it down.

Perdue is also a grandparent, though.

“I’ve got 14 grandchildren, and there is no way that I would propose something if I didn’t think it was good, healthful, and the right thing to do,” Perdue said. “And here’s the thing about local control: It means that this new flexibility will give schools and states the option of doing what we’re laying out here today. These are not mandates on schools.”

Perdue has the School Nutrition Association on his side. CEO Patricia Montague said in a statement that she appreciated the USDA chief for his “support of school meal programs in providing flexibility to prepare and serve healthy meals that are appealing to students.”