WASHINGTON, May 3, 2017 - U.S. biodiesel production could surge if the industry succeeds in cutting off subsidized biodiesel imports and raising federal biofuels volume requirements.But success may depend on whether Congress agrees on and President Trump signs major tax reform legislation that includes key biofuels provisions being championed by the industry and its supporters in Congress.

In a full-court press including a grass-roots campaign, White House meetings and Capitol Hill negotiations aimed at winning bipartisan support for their goals, the National Biodiesel Board (NBB) is hard at work on:

•           Switching the biodiesel tax credit from blenders to producers to boost U.S. production by eliminating the main incentive for biodiesel imports;

•           Educating the administration, Congress, and the public about how increasing U.S. biodiesel use creates jobs and benefits the entire U.S. economy.

NBB CEO Donnell Rehagen insists that these changes are needed because “American biodiesel will not reach its full potential under the current regulatory framework. Changes that ensure American tax dollars and American programs support American production are just common sense.” NBB spokesperson Rosemarie Calabro Tully adds that NBB “feels strongly that moving from a blenders to a producers’ credit fits within how the administration is viewing job creation here in the United States.”

In an Agri-Pulse interview in March, Rehagen warned that it will take a “very concerted and coordinated effort” to reach out to all the members of Congress.

“We could have 15 champions in the House and Senate and it’s not going to be enough to make anything happen. We need majority votes when our issues come up. So, we’re talking about hundreds of supporters in Congress. That’s our task.” 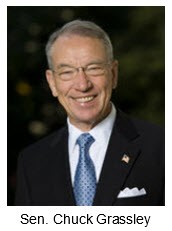 The good news for the U.S. biodiesel industry is that both Congress and the administration are engaging.

The Commerce Department has launched antidumping and countervailing duty investigations targeting biodiesel imported from Argentina and Indonesia. And NBB hopes for a U.S. International Trade Commission preliminary decision May 5 to proceed with a full investigation of imports from those countries.

On the congressional side, last week Sens. Chuck Grassley, R-Iowa and Maria Cantwell, D-Wash., introduced their American Renewable Fuel and Job Creation Act. The bill would extend the $1-per-gallon biodiesel tax credit that expired at the end of last year to Dec. 31, 2020. Based on the past pattern of retroactive extensions, this four-year fix is expected. But in what would be a significant boost for the U.S. biodiesel industry, the bill would also answer NBB’s prayers by shifting the credit from a blenders credit to a producers credit.

In the House, Kristi Noem, R-S.D. and Bill Pascrell, D-N.J., are working on companion legislation.

But with a backlogged agenda for both legislation and rewriting federal regulations, Washington insiders see the best hope for biodiesel is to include the Grassley/Cantwell bill as part of comprehensive tax reform legislation that could be signed into law this year.

Getting this done won’t be easy, given forceful opposition.

The National Association of Truck Stop Operators (NATSO) is fighting efforts to switch biofuels tax credits from blenders to producers. NATSO President and CEO Lisa Mullings charges that after NATSO’s years of working with “the entire renewable fuels community to protect the biodiesel blenders tax credit and to support a robust Renewable Fuel Standard,” switching to a producers tax credit “would force retailers to pay more for fuel.”

“When fuel prices increase by just 1 or 2 cents per gallon, customers begin to shop for a better deal,” Mullings warns. “Since 2005, the $1 per gallon biodiesel blenders tax credit has helped fuel retailers to sell biodiesel at a price that is cost competitive with diesel, thereby incentivizing consumer consumption. Converting the tax credit from a blenders credit to a producers credit would drive up biodiesel prices to a degree that would diminish consumer interest in the product, ultimately hindering U.S. efforts to advance the utilization of cleaner burning fuels.”

To highlight its message, NATSO’s annual “Day on Capitol Hill” May 15-17 will give the truck stop and travel plaza community an opportunity to make its case to members of Congress.

The Advanced Biofuels Association (ABFA) has also come out strongly against NBB’s proposals for supporting U.S. biofuels producers. ABFA President Michael McAdams maintains that switching to a producers tax credit and shutting off biodiesel imports “will have the effect of raising the cost of biodiesel to those selling the fuels to American drivers, while further lining the pockets of those who grow soybeans in the United States.”

McAdams warns that “These actions by a few large U.S. producers and U.S. soybean growers puts the entire Renewable Volume Obligations (RVO) system at risk, as the current Renewable Fuel Standard (RFS) program depends on security of supply from foreign markets to ensure the 2 billion gallon (biodiesel) mandate can be achieved.”

In contrast, NBB Vice President of Federal Affairs Anne Steckel explained last month in the U.S. International Trade Commission anti-dumping case that “imports have surged into the market and taken hundreds of millions of gallons of production and sales away from U.S. biodiesel producers.” She said “foreign government subsidies and dumped prices from foreign suppliers have undermined U.S. producers’ ability to compete.”

Steckel says the US. biodiesel industry will continue to lose jobs if the structure of the tax credit isn’t changed. “Our producers are being pushed out of the market thanks to subsidized foreign production and imports of biodiesel,” she says. “With more than 3.1 billion gallons of installed capacity last year and about 1.4 billion gallons of actual domestic production, biodiesel producers across the country need a level playing field to expand production – especially given that the industry is only running at 65 percent of capacity.”

University of Illinois agricultural economist Scott Irwin tells Agri-Pulse that if NBB achieves its goal of boosting U.S. biodiesel production by sharply curtailing imports, “The price of biodiesel is inevitably going to have to go up if you convert biodiesel from a blender to a producer tax credit. . . It’s only a question of how much will the price of biodiesel in the U.S. go up.”Irwin says the strange outcome is that by cutting off biodiesel imports, “we would no longer be taking advantage of Argentine taxpayers” who currently subsidize Argentine biodiesel production in order to create a domestic industry. The result, he says, is that “Our plants will produce it, but it won’t be as cheap as it was coming in from Argentina.”

As for the Grassley/Cantwell legislation, Irwin sees it as “the kind of bill that will appeal to President Trump, protecting our domestic industry.”