For the 2017 planting season, farmers dueling with Mother Nature

ARKANSAS, May 10, 2017 - Weather events across the country are taking a toll on the 2017 growing season, crippling planting efforts in some places before they can even get started.

Arkansas was hit especially hard by flooding, but heavy rains also affected operations in Missouri, Illinois, and Michigan as well as 11 other states. In Kansas and Colorado, where farmers are trying to recover from devastating wildfires, a late-season blizzard decimated the winter wheat crop and buried cattle in snowdrifts. And in Florida, officials say over 126,000 acres have burned in wildfires since January, surpassing the five-year average of acreage burned in a typical year.

Agriculture Secretary Sonny Perdue on Sunday took a helicopter tour of the damage in Arkansas with Gov. Asa Hutchinson, who said flooding in 36 counties had taken nine lives. A report from the University of Arkansas Cooperative Extension Service puts farm losses alone at $64.5 million, a figure that could rise as more information comes in.

“You go down the White River, and the farmland has been flooded in mass expanses,” Hutchinson said after an aerial tour of the conditions on Sunday. “We saw one field in which it looked like the water was at least 6 to 8 feet above the farmland, and you also saw as the water receded, that the farmland was still damaged from it.”

The situation in Arkansas is dire, according to Jeff Rutledge, who farms about 4,000 acres of rice, corn and soybeans near the city of Newport in the northeast part of the state. “We’ve got some low ground here and the rivers are really high,” he said. About 1,000 acres of his corn and soybeans have already been destroyed, Rutledge told Agri-Pulse. More than 800 acres of his rice, which just recently went in the ground, might survive, but it’s too early to tell.

Because his farm is at the confluence of the White and Black rivers, flooding is not unusual, but this year it’s particularly bad. Floodwaters covered his land in April of 2011, but a wet spring that year meant he hadn’t yet planted his rice. This year, dry conditions allowed him to plant on time, and as of late last week some of his fields were under 10 feet of water.

When the floods came six years ago only about 45 percent of the rice in Arkansas was planted, said Rutledge, who is also chairman of the Arkansas Rice Council. This year, about 92 percent of the state’s rice was in the ground when the heavy rains started.

Rutledge said his rice is insured, but if the crop is destroyed it won’t be as simple as collecting on the policy and then taking a loss. He’ll likely have to plant again because of a new “practical to replant” provision that could be even more expensive. He’ll have to invest in new inputs, and he said planting late in the season almost never results in good yields. Under Risk Management Agency guidelines, a replanting payment may be made to the insured if it is determined that it is “Practical to Replant” in the area, and Authorization to Replant has been given by an authorized crop insurance adjuster.

As for state or federal assistance, he said it’s unclear what may be coming.

Replant? File for Prevented Planting? The options are complicated
US farmers are ready for trade boost with China
The deep (spring) freeze challenges farmers, suppliers

The wait could be a long one. The National Weather Service in Little Rock is forecasting more stormy weather and a USDA meteorologist said another two inches of rain is expected Thursday in areas already inundated with 12 to 20 inches over the past several weeks. 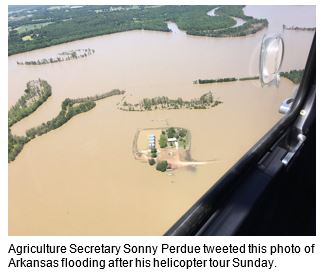 Perdue’s visit to the flooded areas followed a news release last week in which he pledged the “full resources and support” of USDA to those affected by flooding in Arkansas and elsewhere. Aside from Arkansas, the National Weather Service also shows flooding upriver in Missouri, Illinois, and Michigan as well as 11 other states. The Midwest Regional Climate Center says the month of April was the fourth wettest on record for the Midwest region, with some parts of Missouri receiving more than three times the normal precipitation.

The weather conditions were also prevalent in Monday’s Crop Progress Report from the National Agricultural Statistics Service. NASS said that as of Sunday, just 47 percent of the nation’s corn crop has been planted compared to 61 percent a year earlier and the 52 percent five-year average. Cool, damp conditions are prevalent across the Corn Belt, where much of the nation’s soybeans are also grown.

Some of the figures are most dramatic in Iowa. The report shows the state is behind on corn planted (52 percent versus 77 percent a year ago), corn stage (7 percent emerged this year compared to 25 percent last year), and soybean acres planted (9 percent this year compared to 26 percent last year). Iowa Ag Secretary Bill Northey said in a release that he’s hoping that with improved weather conditions, farmers “will continue to see significant progress on both corn and soybean planting the next several days.”

Aside from heavy rains, recent snow in Kansas is also affecting the state’s winter wheat. Some fields were under a foot of snow, contributing to the state’s crop being rated 27 percent poor or very poor compared to the 13 percent national average. That storm also buried herds of cattle in deep snow banks. Preliminary estimates show losses will likely be in the thousands of animals.

Now, just two weeks into his tenure as the nation’s top agriculture official, Perdue finds himself literally getting his feet wet as he assesses the damage of a tumultuous spring. “It’s kind of like being at a funeral,” Perdue said Sunday during his visit to Arkansas. “I’m going to give you a hug and say ‘We’re going to do everything we can, and if you need us, call on us.’”