WASHINGTON, May 24, 2017 - A recently announced agreement between the U.S. and China has been hailed as a huge win for U.S. beef because China promised to follow through on a longstanding commitment to open up its market to U.S. imports – after another round of technical consultations. But just as important to companies seeking to commercialize genetically modified seeds was China’s promise to review eight traits that have been waiting as long as 70 months for final approval.

China’s National Biosafety Committee (NBC) plans to meet by the end of the month to examine the eight pending U.S. biotech product applications. If the products are cleared for safety, China will grant certificates within 20 working days. If they don’t pass the safety evaluations, the NBC will provide the applicants “a complete list of requested information necessary to finalize the safety assessment for the products’ intended use, along with an explanation of how the requested information would be relevant to the safety of the products’ intended use,” according to the Commerce Department announcement.

The company that has the most to gain from the agreement likely is Dow AgroSciences, which has two of the eight traits that China has pledged to review. Dow submitted Enlist corn for approval in China in 2011 and Enlist soybean in 2012. Both products are genetically engineered to be tolerant to glyphosate and the choline salt of 2,4-D, the chemicals in Dow’s Enlist Duo herbicide.

But although the company received USDA approval of the traits in 2014, followed shortly afterwards by EPA approval of Enlist Duo, the delay in getting approval from China has pushed back full commercialization of Enlist corn and soybeans in the U.S.

“While Dow AgroSciences works with authorities in China to secure regulatory approvals of these products, the company has taken steps to prevent the grain from reaching the export market, seriously limiting sales in the United States,” the company said after the U.S.-China agreement was announced. “In 2017, for the third growing season in a row, Dow AgroSciences has elected to conduct a ‘Stewarded Introduction’ of Enlist corn, in which the seed is sold to select farmers who are willing to follow stewardship guidelines. These guidelines limit what the farmers can do with grain grown from Enlist corn seed.”

At the same time, the company has been growing Enlist soybeans for seed production, which “will enable Dow AgroSciences to offer more, high-yielding soybean varieties with the Enlist traits at launch.”

Waiting on China has cost Dow an opportunity for significant growth. In its 2014 annual report, Dow Chemical said that it expected that the Enlist technology would “lead Dow AgroSciences’ drive to $1 billion in incremental revenue from the sale of new products by 2018.”

“Dow is probably the biggest beneficiary in the short term” of the recently announced agreement, says Jonas Oxgaard, a chemicals analyst at Bernstein Research in New York City. “We don’t really have that many blockbuster GM traits left,” he adds. Enlist “is probably the last of the blockbusters in the pipeline.” 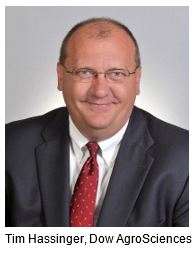 Dow AgroSciences Chairman and CEO Tim Hassinger said the company was “very encouraged” by the announcement. “Securing regulatory approvals for import of grain from Dow AgroSciences’ Enlist corn and soybean traits would be a significant win for both countries and would benefit U.S. farmers, as resistant weeds now infest nearly 100 million acres of American farmland,” he said.

Chinese regulatory approval is not the only hurdle to commercialization of the Enlist technology. Environmental groups have filed a lawsuit in the 9th Circuit Court of Appeals challenging EPA’s approval of Enlist Duo. Dow has intervened in the case and filed a motion to dismiss it.

Monsanto, Syngenta and DuPont Pioneer also are waiting on final safety approvals, but Oxgaard said he doesn’t think approval of those traits by China would significantly affect the companies’ bottom lines.

DuPont Pioneer said it is waiting on approval of a corn insect control trait – Event DP 4114 – which is contained in its Qrome corn products that have been approved for cultivation in the U.S. and Canada “and have also received import approval in a number of importing countries.”

In March, DuPont Pioneer announced a limited commercial introduction of Qrome products with participation by about 100 growers in the western Corn Belt.

“We are encouraged by the collaborative discussions about a science-based regulatory review process,” DuPont Pioneer said when asked for comment on the agreement.

Syngenta aligned itself with the statement by the Biotechnology Innovation Organization’s executive vice president for international affairs, Joseph Damond, who said “the ultimate test of success will be for China to follow its process and quickly approve the eight pending biotechnology applications and establish a synchronized, timely and predictable process going forward.”

The National Corn Growers Association also applauded the announcement by the Commerce Department, saying that “transparency, predictability and science-based standards are all critical elements to sound regulation of technological innovations, and we look forward to the outcome of China’s next NBC meeting.”

A report released in December by the Council for Agricultural Science and Technology (CAST) found that “the increasing disparity in the biotech product approval timelines between exporting countries that utilize new technologies and large grain importing countries is a significant and growing impediment to trade, specifically in the European Union and China.”