One reason to expect dramatic growth for RNG is that the petroleum industry’s fracking surge has unleashed abundant, low-cost natural gas. And fracking has triggered new investment in pipelines and other infrastructure to deliver natural gas to the electricity market as more utilities switch from coal to natural gas to improve both economics and responsiveness. Adding to new demand, more trucking fleets are filling up with natural gas rather than gasoline or diesel. With the private sector’s growing determination to address climate change, an increasing portion of this demand is shifting to RNG.

American Biogas Council Executive Director Patrick Serfass says another factor behind RNG growth is that the U.S. is generating:

Currently, most of these potential energy sources are literally wasted, at high costs for handling and disposal. The good news is that over 2,200 biogas facilities across the U.S. are already turning that problem into profits, cleaner air, and new jobs.

Adding to the challenge is the fact that keeping American consumers fed requires supplying the U.S. farm sector with steady flows of nitrogen and phosphorus. Fortunately, today’s 2,200 biogas plants – including one at Fair Oaks Dairy Farms in Indiana to handle the manure from 36,000 cows – pump out not only fuel for electricity generation and transportation but a full range of fertilizers and other soil amendments.

Serfass points out that as long as the U.S. has to handle an immense waste stream and keep farmers supplied with fertilizers, it makes sense to solve both inescapable challenges with biogas and RNG. He explains that turning the organic wastes from food production, livestock manure, wastewater treatment plants, and municipal solid waste into high-energy, climate-positive biogas is a profitable first step. This first stage creates significant economic and environmental benefits.

The benefits multiply in the second stage – turning biogas into RNG by cleaning the biogas so that it can be pumped into the nation’s natural gas pipelines for distribution.

Speaking at last week’s “Powering Businesses, Homes and Vehicles with Waste” briefing sponsored by the American Biogas Council (ABC), the Coalition for Renewable Natural Gas (CRNG), and the Environmental and Energy Study Institute (EESI), Serfass explained that both in dealing with waste and supplying fertilizers, “we have to do all that anyway.” As a result, he said, it’s “a no-brainer that we need to be building more biogas systems.”

With the potential to build another 13,500 new biogas and RNG systems across the U.S. to use existing waste resources, Serfass concludes that “We could be putting $40 billion in construction spending into our economy, creating 335,000 short-term construction jobs and 23,000 permanent jobs once those systems are built and become operational.”

Also speaking at the briefing, CRNG CEO Johannes Escudero pointed to RNG’s dramatic growth. In 2011, there were 31 operating RNG projects in the U.S., with virtually all of the gas used for generating electricity “to displace coal and complement geologic natural gas.” Today’s 57 operating plants in 27 states serve a broader market, with 24 percent of the RNG used for off-site power generation and 76 percent for transportation fuel.

Escudero noted that with another 22 RNG projects in the works and more vehicle fleets switching from fossil fuels to RNG, CRNG expects that 2017’s 375 million ethanol gallon equivalents (EGE) of RNG use will turn into more than 622 million EGE for 2018. The 2018 forecast pegs the breakdown to include the same 81 million EGE for off-site power generation while transportation fuel grows from 294 million EGE for 2017 to 541 million for 2018. This shift will mean just 13 percent of the RNG being used for power and 87 percent for transportation fuel.

Escudero added that with other sources of cellulosic biofuels far below expectations, RNG has been supplying 98 percent of the federal Renewable Fuel Standard (RFS) qualified cellulosic biofuel in the U.S. market since 2014.

Increasingly, he said, federal programs led by the RFS and state programs led by California’s Low Carbon Fuel Standard (LCFS) are driving production of RNG as an “ultra-low carbon transportation fuel for a new generation of medium- and heavy-duty natural gas vehicles.” To meet this growing demand, he said that after developing 22 projects from 1985 to 2010 and 31 projects from 2011 to 2016, 22 more are being developed currently, with $352 million in RFS-related project construction investment expected in 2018.

Both Escudero and Serfass, however, emphasized that protecting the RFS along with other federal and state programs will be essential for RNG to achieve its full potential to supply energy, fertilizers, and a rich array of environmental benefits.

Pointing to President Trump’s proposed 2018 federal budget that targets a broad swath of federal programs related to renewable energy for either steep cuts or elimination, Serfass called the proposals “not great news for those of us that care about renewable energy.” 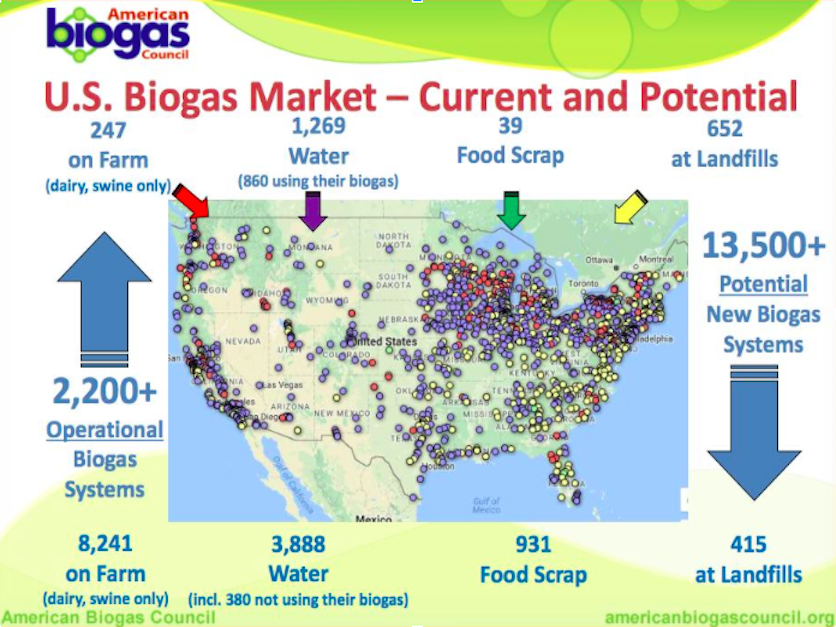