CANADA, June 7, 2017 - Even with its strict production quotas and guaranteed high milk prices, dairy farms in Canada are disappearing at a rate not far below what is happening in the United States. The country’s latest agricultural census shows a 14 percent decline in the number of Canadian dairy farms from 2011 to 2016. By comparison, U.S. dairy farms shrunk by 18.5 percent in the same five years.

Dairy cattle numbers in Canada also declined in the census period to 1.4 million head, settling 3.8 percent lower than five years earlier, but milk production increased because of greater productivity and efficiency. The average number of dairy cattle per farm increased 11.9 percent to 100 in 2016, considerably smaller than the U.S. average.

More significant than the raw numbers is the picture the census provides of the distribution of dairy farms and thus the political influence that has helped protect the supply management system through a succession of governments, both liberal and conservative, for more than half a century. The quota system seeks to “balance the supply and demand of milk and maintain stable production throughout the year and throughout the country,” Statistics Canada explains.

It also shows that Canada’s dairy farms are concentrated in Quebec and Ontario – the two most populous provinces – which together account for more than three-fourths of all dairy farm numbers in the country. With 42 percent of the nation’s total in Quebec and 34.9 percent in Ontario, and most of them small-scale operations, their political clout is enhanced.

The government report notes that efficiency in the dairy industry was achieved through improvements in feed quality and management, genetics, and advancements in technology, including the use of robotic milking. According to census data, 8.9 percent of the country’s dairy operations now use robotic milking. Mid-sized farms are more likely to report robotic milking than small and large-sized farms, with 44.7 percent of farms with 101-200 cows using the practice.

“In addition to using robotic milking, the improved efficiencies of many dairy type farms can be linked to advancements in animal housing, milking technology, herd management and feed management,” the census says. “In 2015, almost half of dairy type farms reported using automated environmental controls for animal housing or automated animal feeding technology. Investment in innovative technology contributes to the dairy industry producing more with less.” 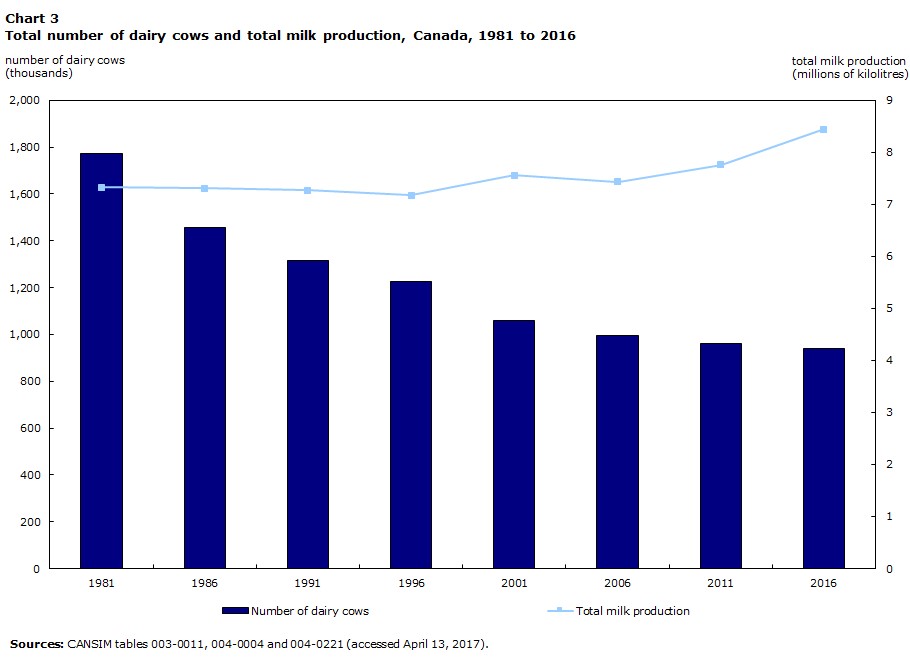