That numerical event (see chart) may get top billing when USDA’s National Agricultural Statistics Service (NASS) reports planted acreage for 2017 field crops in three weeks. Soybean plantings have rocketed toward 90 million acres while corn has receded from a record 97.3 million acres five years ago to 90 million, as projected in the NASS March plantings-intentions report. Informa Economics, in fact, recently projected acreage for both crops this year at a little under 90 million. 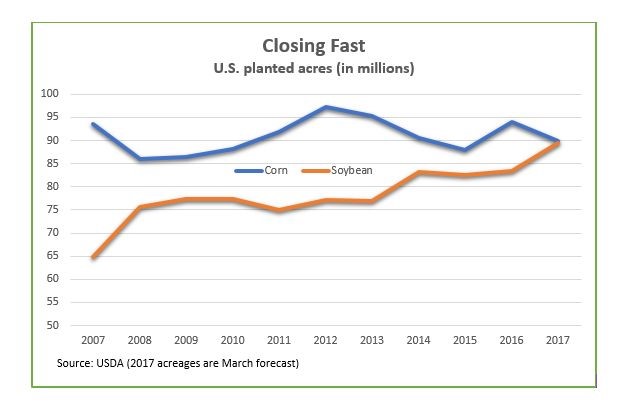 This year’s shrinkage in corn plantings is no surprise, considering 2016’s record yields and production, said Nathan Fields, director of biotechnology and crop inputs for the National Corn Growers Association. “The big driver [of plantings] is the huge crop we had last year.” It has created abundant stocks and softened the market, he said, and, while costs, including stubbornly high cropland prices, “are keeping the cost of production up pretty high.” So, he said, “a drop in acreage of 3 to 4 percent does not seem like an unreasonable market correction, with what [corn] prices are.”

What’s more, muddy soils have persisted in a plethora of locations in Kansas, Illinois, the eastern Corn Belt and elsewhere, preventing some seeding of corn, and it’s getting too late to plant corn. Fields expects many farmers will choose to seed beans, which have a shorter season, instead on some acres.

But, despite the muddy spots on the corn and beans map, American Soybean Association President Ron Moore, an Illinois farmer, said he hasn’t “seen anything that would lead me to believe the USDA [planting intentions] numbers are going to change very much.” Some corn is still being seeded late, or reseeded where flooding occurred, he said, but the popularity of pre-plant herbicides in corn fields will preclude most substituting of soybeans in those fields, he expects.

Soybean acreage, meanwhile, continues its westward and northward expansion. Much of soybean success has been in yields in the Corn Belt: up 38 percent in Iowa in the past 20 years, to 60.5 bushels per acre, for example. But, said Moore, “the seed companies see the same thing as we do – the growing global demand for soybean products – and they are trying to expand the soybean-growing belt into those areas that have been for growing grain in the past.”

With more soybeans being bred for quick maturity and drier soils, acreage has increased 500 percent in North Dakota in the past two decades. It has soared 225 percent in New York, more than doubled in Kansas and Wisconsin, risen 64 percent in South Dakota and is up about 50 percent in Nebraska and Kentucky. North of the border, the expansion in Manitoba planted acres has been 184 percent since 2011.

Acreages are down this year for both spring wheat, newly seeded in the North, and winter wheat, with its harvest already progressing in Texas and Oklahoma. In the spring wheat belt, “soybeans and corn are pushing spring wheat farther west,” said Frayne Olson, crop economist at North Dakota State University. NASS projected a 21 percent expansion in Montana, but in his state, which usually has 60 percent of U.S. spring wheat plantings, a 10 percent shrink, to 5.4 million.

“That was a bigger drop than I was expecting to see,” but could well be right, Olson said. When farmers looked at crop budgets last winter for 2017 plantings, “soybeans were a slam dunk,” and corn, with its high production costs and soft market “were kind of a push,” and projected a profit for some farmers who could expect to haul corn straight to ethanol plants, Olson said. 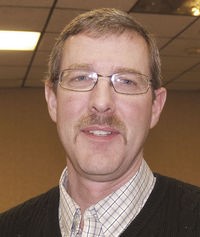 Meanwhile, “wheat was marginal at best,” in crop budgets, Olson said. However, the market outlook for high quality spring wheat, with its high protein content, has brightened, he said. That’s because it appears that the U.S. and global stocks of low-protein wheat is going to remain very plentiful in the year ahead, he said, and the demand for spring wheat for blending with low-protein stocks will remain strong. The Minneapolis wheat futures price, the benchmark for spring wheat, is climbing toward $6 a bushel, far higher than lower-protein wheat prices, bolstered by emerging drought conditions in the spring-wheat growing region. 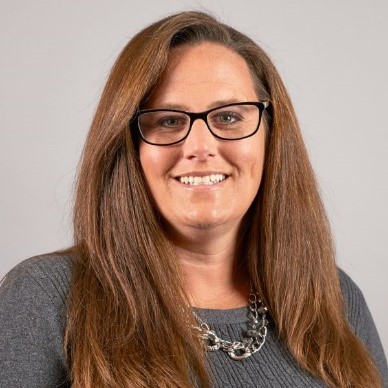 Meanwhile, winter wheat plantings were down sharply last fall, owing to weak prices. In addition, factors such as a huge early-May dumping of snow in Kansas and infestations of wheat streak mosaic virus will spell harvest of perhaps 25 percent fewer acres this summer versus a year ago. The NASS June 5 crop progress report rated 15 percent of U.S. winter wheat acres as poor or very poor, double the share with those ratings a year earlier. Those ratings fell on 26 percent of the Kansas crop, “so it’s going to be a pretty variable crop,” said Marsha Boswell, communications director for the Kansas Wheat Commission, and many of poorest acres won’t likely be harvested.

Sorghum plantings have plunged amid the low grain market prices of recent years, along with widespread invasion of sugar cane aphids, and may drop to 5.8 million acres, down 900,000 acres from last year, NASS projected in March. But at Texas and Louisiana Gulf ports, grain sorghum hauled for July delivery has fetched about $4.65 a bushel, a highly unusual 60 cents more than corn at the same terminals.

So, Tim Lust, chief executive of the National Sorghum Producers, expects planting will be much nearer to last year’s. Planting is now wrapping up for most of the central and southern Great Plains crop, and he reports that soil moisture is favorable across that whole region. “I think we feel good, particularly . . . in Kansas (the top producing state), about getting the crop off to a good start,” he said.

A certain plunge in rice acreage this year will likely exceed the 17 percent dropoff projected in the March planting intensions report, says Robert Papanos, a Houston-based rice market analyst and trader.
Farmers, facing lower prices this year, already projected a 500,000-acre cutback in March. But flooding in both Arkansas and California, which together produce three-fourths of U.S. rice, stymied plantings further through May. Rain has swamped many paddies in Arkansas.

In California, Papanos said, the Sierra Nevada’s snow melt has been pouring into rivers and reservoirs and is being diverted into lowlands that comprise much of that state’s rice acreage. The lowlands, usually planted to rice, are emergency flood land, and “this year, guess what?

They are all under water,” Papanos said. He expects flooding will prevent at least 50,000 California acres from being planted; in Arkansas, 50,000 to 100,000 acres. But he does not foresee the planting shortfall to affect market prices much: “Nobody cares about supply anymore,” he said. “There is enough [rice] around the world, and it’s easy to ship and it’s easy to buy.”

In response to increased market prices and forecasts of continued growth in world cotton mill use and demand, U.S. farmers have stepped up plantings of upland cotton this year. Growers indicated about 9 percent more acres in the National Cotton Council’s winter survey, and told NASS about 21 percent more acres in March. In any case, acreage will surely be up: USDA economists project world consumption – 116 million bales – will exceed production for the third year running and will be the highest in eight years. However, Jon Devine, senior economist for Cotton Incorporated, says there won’t be any meaningful shrinkage in global stocks because all of the drawdown will be in China, where the stockpile is huge. Nonetheless, the U.S. upland cotton benchmark price has climbed to about 74.5 cents a pound, up a dime from a year ago.

The U.S. canola production continues to expand, with at least 10 percent more acres this year, but Barry Coleman, executive director of the Northern Canola Growers, notes that the expected 1.9 million U.S. acres will still be only about 10 percent of North American production. The rest is in western Canada. Nonetheless, while North Dakotans continue to seed about 1.5 million acres annually, Montanans have more than doubled their plantings since 2012, to 110,000 acres, based on the planting intentions survey. Kansas, Oklahoma and Washington State have all boosted acreage substantially as well.